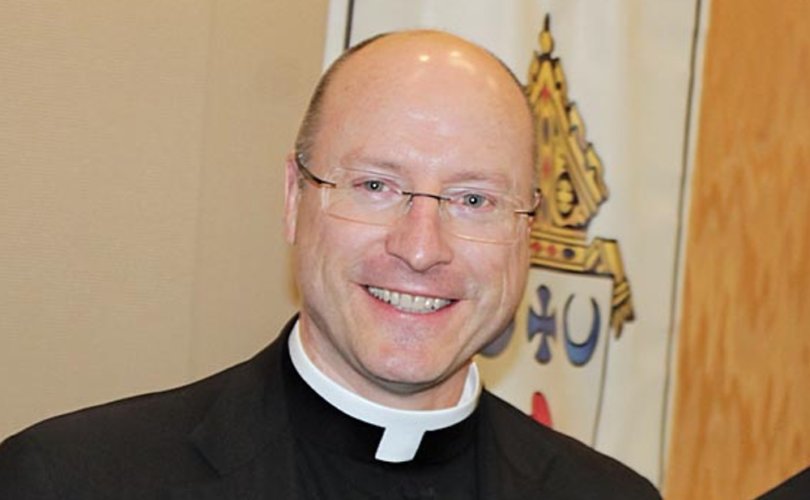 “My frustration, shared with many other people, is this,” Bishop McKnight of the Diocese of Jefferson City explained. “We have known about the scandal of Archbishop McCarrick since the end of June, and our Church must take immediate, decisive and substantive action in light of the deep wound the scandal has caused.”

It’s not so much the time it’s taking to punish McCarrick, he said, and more is needed beyond punishment of the perpetrator.

“How could his rise to such an influential position in the Church have happened?” he questioned. “I am concerned how the national conference of bishops and the Holy See answer that question.”

The meeting served to prolong Catholics’ anger over the abuse scandal, after the Vatican blocked the U.S. bishops from voting on two measures designed to address abuse related to bishops, and a motion to officially ask the Holy See to release documents related to the McCarrick case failed to pass.

The Holy See insisted the U.S. Bishops not act upon any proposed anti-sex abuse measures until after Pope Francis meets with the presidents of the world’s episcopal conferences in Rome in February. USCCB President Cardinal Daniel DiNardo will attend that meeting.

In a column written following the Assembly, McKnight called for substantial lay involvement in addressing the abuse crisis – an idea that received some pushback during the meeting.

He also said those culpable at any level in the McCarrick cover-up should come forward now of their own accord.

“At the time of this writing, there has not been one bishop, archbishop or cardinal in either the Holy See or the United States who has come forward on his own to repent publicly of his sins of omission or commission with regard to Archbishop McCarrick’s series of promotions over decades,” stated Bishop McKnight.

“Please, be men, not cowards, and come clean on your own!” he exclaimed. “There doesn’t have to be a formal and long, drawn out investigation for a bishop to exercise a little compunction and concern for the well-being of the whole Church. An independent and transparent investigation is all the more necessary when culpable hierarchs exhibit an incapacity to do the right thing on their own.”

McKnight also criticized the welcome mat being out at the USCCB meeting for retired bishops responsible for cover-up in the abuse crisis, saying, “survivors of abuse are further victimized when we fail to take swift action.”

“Seeing certain retired bishops who were notoriously responsible for covering up clergy sexual abuse at this year’s General Assembly in Baltimore as welcome guests was a slap in the face to all who have been wounded by the clergy,” he said. “This example of episcopal arrogance and clericalism evidences the fact that we still don’t get the problem.”

Both retired Los Angeles Cardinal Roger Mahony and Washington, D.C. Cardinal Donald Wuerl gave interventions from the floor of he General Assembly. Mahony advised the Bishops on how to lead and Wuerl spoke of purification in the life of the Church.

Mahony has been barred from public ministry in Los Angeles since 2013 for his part in covering up sex abuse there. And in September, Wuerl asked Pope Francis to accept his resignation from three years ago after facing intense criticism over his handling of abuse cases while bishop of Pittsburgh. Wuerl remains the apostolic administrator of the Archdiocese of Washington until his replacement is appointed.

The day after the Holy See’s intervention was announced at the bishops’ meeting, Chicago Cardinal Blase Cupich submitted an alternative proposal for handling abuse allegations against bishops. Wuerl reportedly collaborated with Cupich on this.

Cupich and Wuerl are members of the Congregation for Bishops, the Vatican Congregation that communicated the last-minute directive to Cardinal DiNardo instructing the USCCB to not vote on its proposed anti-abuse measures. Cupich has denied the two collaborated on a plan.

A task force of past and present USCCB presidents will review the anti-abuse plans for DiNardo to potentially take to Rome when he attends the February meeting called by Pope Francis.

“I was disappointed that even the mild proposals up for consideration at the Baltimore meeting had to be pulled from a vote,” McKnight said in his column. “It was a rather harsh reminder to me of what many lay people have been saying throughout our Diocese: We bishops are ineffectual in our attempts to address the problem of abuse of power by the hierarchy.”

An internal investigation of the McCarrick scandal without the use of competent and qualified lay investigators will hardly be considered transparent and credible, the bishop continued.

“We need and must utilize the best and brightest people to do a top-notch investigation and study of the problem,” he said. “Archbishop Charles Scicluna of Malta is the most qualified Catholic clergy to lead such an investigation, but without knowing that his collaborators include competent laity, the public may not perceive his eventual report as independent and complete enough to be believed.”

Questioning why well-qualified, nationally-known, and trusted lay experts cannot be named to the special task force announced by the USCCB president, the Jefferson City bishop said, “We are too insular and closed in as a hierarchy, and so are some of our processes at the USCCB.”

Beyond the McCarrick scandal, the bishops have more work cut out for them with regard to putting into place protocols and institutional structures to build credibility in the hierarchy’s handling of sexual abuse cases going forward, he said, adding, “History proves that we bishops are not capable of policing ourselves adequately on the issue of clergy sexual abuse.”