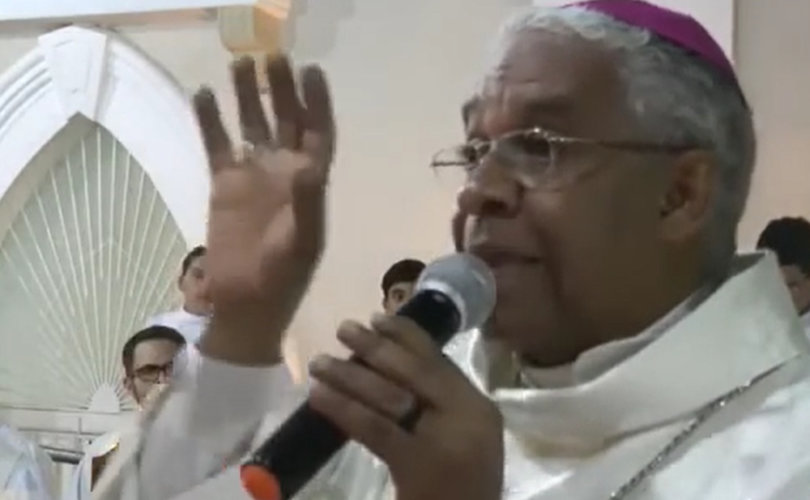 CAICO, Brazil, August 10, 2017 (LifeSiteNews) — A Brazilian bishop who called homosexuality a “gift from God” in a homily defended his words by saying his intention was to “save lives” and help “overcome prejudices that kill.”

But Daniel Mattson, a same-sex-attracted Catholic and author of the recently released Ignatius Press book “Why I Don’t Call Myself Gay,” says the bishop’s words will do the opposite.

“If homosexuality is a gift, and therefore it’s good, then why is it not good to act upon it?” he told LifeSiteNews.

“There’s a logical inconsistency there that’s going to lead to a lot of confusion, especially for young people, which will actually lead to more damage. Because when they live outside God’s plan for human sexuality, that always leads to unhappiness and despair.”

Bishop Antônio Carlos Cruz Santos of Caicó, Brazil, said at a July 30 Mass that “when you look at homosexuality, you cannot say it’s an option,” Crux reported.

“If it is not a choice, if it is not a disease, in the perspective of faith it can only be a gift,” the bishop added.

“A gift from God. It’s given by God. But perhaps our prejudices do not get the gift of God.”

Cruz, who was appointed by Pope Francis in 2014 after serving in some of Brazil’s more notorious slums, said when slavery was legal, “they said we black people didn’t have a soul.”

“Just as we were able to leap, in the wisdom of the Gospel, and overcome slavery, is it not the time for us to leap, from a perspective of faith, and overcome prejudices against our brothers who experience same-sex attraction?” the bishop asked.

Cruz said he was disturbed after hearing a radio interview with a professor who documented high rates of suicide among transsexuals and transvestites.

He started to think about “so many brothers and sisters with a homosexual orientation who feel misunderstood and unloved by us, who are Church, by their families, by their society and even by themselves, as it was in the days of slavery,” Cruz said.

The bishop also referred to Pope Francis’ quote from 2013: “If someone is gay and is searching for the Lord and has good will, then who am I to judge him?”

Cruz referred, as did the pope, to the Catechism of the Catholic Church, which proscribes unjust discrimination against homosexual persons, reported Crux.

Cruz also quoted the pope’s words in Amoris Laetitia, his controversial 2015 exhortation on the family, on the “accompanying, discernment and welcoming” of Catholics in “irregular unions.”

While this was addressed to divorced and civilly remarried Catholics, Cruz said, it could apply to homosexual persons as well.

Posted on YouTube, the homily sparked a number of reactions, with a number of critics blasting Cruz’s words as heretical and wanting the Vatican to intervene, Crux reported.

Cruz posted a statement on the diocesan website defending his words.

He was following the pope and the Church, Cruz said.

“As Pope Francis told us many times, people already know by heart the doctrine of the Church about abortion, divorce and homosexual acts,” he wrote.

“He asks us not to be obsessed with sin, increasing the wounds of these people, and insists that the doors of the church are open to welcome, instruct, discern, love in order to bring salvation to all without exception.”

He was concerned about the “weaknesses of his flock,” and “without wanting to minimize the doctrinal and moral dimensions that the subject matter involves, my intention is to save lives, helping to overcome prejudices that kill and enter into the dynamic of God’s mercy that respects, rescues and saves people.”

The bishop’s concern is “a good impulse,” Mattson told LifeSiteNews. “I admire his heart of compassion.”

But “the question needs to be asked: Why are so many people in the so-called LGBTQ community in danger of suicide?”

As Mattson relates in his new book and the documentary “Desire of the Everlasting Hills,” the Church’s teaching of “accepting our true sexual identity” is “the only thing that will lead to peace and fulfilment for men and women like me.”

Cruz gives “an incomplete view of the possibilities” regarding the homosexual inclination, Mattson pointed out.

“He says if it is not a choice, if it is not a disease, it can only be a gift. But of course, there’s another option,” he said. “That as the result of original sin, we have disordered appetites within us and we don’t see things clearly as they really are.”

Indeed, Section 2358 of the Catechism echoes the 1986 Vatican Letter on the Pastoral Care of Homosexual Persons in stating that the homosexual inclination is an “objective disorder.”

The latter document notes: “Although the particular inclination of the homosexual person is not a sin, it is a more or less strong tendency ordered toward an intrinsic moral evil, and thus the inclination itself must be seen as an objective disorder.”

“So that is fundamental to the Church’s teaching about this issue, this is not in any way good,” Mattson said. “It’s a disordered view of the human person and it is not true respect or compassion to encourage people in a false understanding of themselves.”

“We know that God works good through all things,” he added. “It’s a wound within me and God can work through our brokenness and bring good out of it, but that doesn’t make the wound itself good.”

As for Bishop Cruz’s view, “I just hope that when this sort of sentimentality creeps in by some bishops, that other bishops, out of fraternal love and fraternal charity, would dialogue with those bishops and say, ‘Is this what you really mean?’”