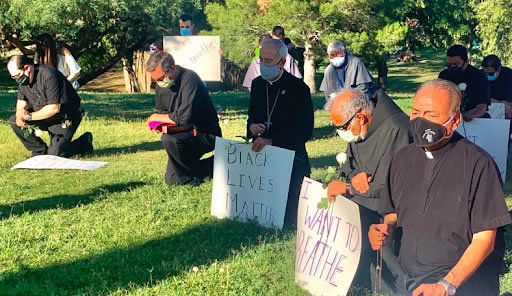 In a rambling 2,500-word commentary published in Jesuit-run America Magazine, El Paso Bishop Mark J. Seitz ping-ponged between denunciations of both major U.S. political parties, but clearly came out in favor of the virulently pro-abortion Democrats because he sees abortion as just one of many “challenging” moral issues facing the nation in the upcoming election.

Seitz, who was famously photographed in early June kneeling while holding a “Black Lives Matter” (BLM) sign, wrote, “We have also seen how the promise of equality contained in our founding documents has been deferred again and again because we cannot confess with one voice — as church or country — what should be self-evident, that Black lives matter,” ignoring that organization’s manifesto calling for the dissolution of the nuclear family while promoting abortion, homosexuality, and transgenderism.

“In an aggressively secular and hyper-competitive world, we should be grateful for the public respect for Pope Francis shown by the Democratic nominee, former vice president Joseph R. Biden Jr., and the values of the working-class ethos that Mr. Biden aims to project,” wrote Seitz, overlooking the fact that President Donald Trump has become the champion of the forgotten working man after the Democratic Party’s long ago decision to ignore the white middle class.

“We should recognize, too, the step forward represented by the selection of Senator Kamala Harris as his running mate. Our daughters and sons need to see women reflected in our nation’s highest leadership,” continued Seitz, failing to mention that Harris is a key cheerleader for Planned Parenthood, having played a key role in defending Planned Parenthood over its sale of aborted baby parts while she served as California’s attorney general.

“As a bishop on the border, I am also encouraged by the Biden campaign’s promises to address climate change, create a path to citizenship for the undocumented, restore protections for asylum seekers and never repeat the criminal practice of separating families at the border,” added Seitz.

Without offering substantiation, the El Paso bishop went on to accuse Christians who are single-issue voters of “scandalously” turning a blind eye to “real breakdowns in solidarity and dehumanizing policies, including crackdowns on worker rights and voting rights, the slashing of social support for the poor and sick, racism and the exploitation of immigrants and the environment.”

Turning his attention to the incumbent candidate, Seitz continued his litany of accusations saying that “Supported by a pagan aesthetic of self-assertion and buoyed by a destructive politics of fear and xenophobia, his administration has encouraged the worst expressions of nativism.”

A united plea from clergy and lay scholars to the Pope to repent for sacrilegious “Pachamama” idolatry at the 2019 Amazon Synod went unheeded.

Pro-life priests have repeatedly rejected the notion that Catholics can in good conscience support the Biden-Harris ticket.