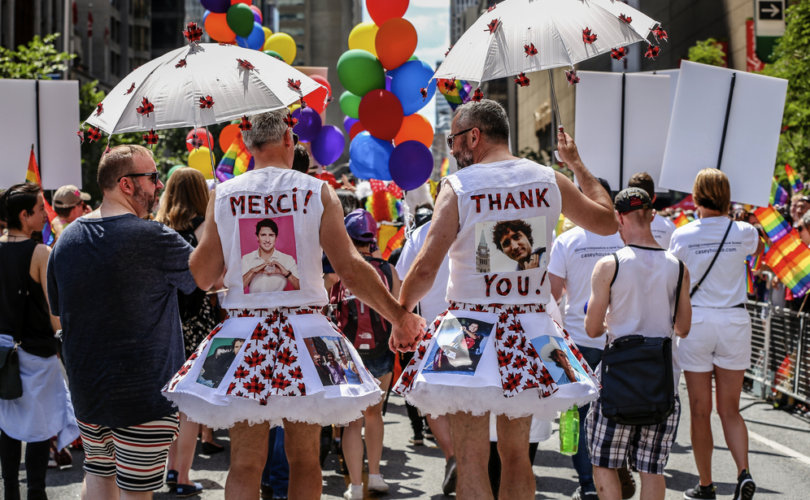 “This central tenet of contemporary gender theory is not in accord with natural law or Christian revelation and has therefore been explicitly rejected by Pope Francis and by Pope Benedict XVI,” the bishops said in a July 7 press release.

The bill, which passed in June, adds “gender expression and identity” as prohibited grounds for discrimination under Canada’s Human Rights Code, and as grounds for conviction under the Criminal Code’s hate crimes section.

Great news: Bill C-16 has passed the Senate – making it illegal to discriminate based on gender identity or expression. #LoveisLove

But “some of the principles behind the legislation – even if widely accepted in our society – cannot be endorsed by Catholics,” they added.

“The most serious of these is the claim that gender is separable from biological sexuality and is to be determined by the individual.”

According to Genesis, “We are created male and female, in the image of God (Genesis 1:26, 27). Each of us – man or woman – is challenged to fulfill our human vocation in a way that is individually unique yet true to what we have been created to be,” the bishops noted.

The Catechism of the Catholic Church (2332, 2333) teaches that “each man and woman ‘should acknowledge and accept’ his or her biological sexual identity, including ‘physical, moral, and spiritual difference and complementarity,’ which ‘affects all aspects of the human person in the unity of his body and soul’,” they stated (emphasis in original).

“This identity ‘especially concerns affectivity, the capacity to love and to procreate, and in a more general way the aptitude for forming bonds of communion with others.’”

The Canadian bishops were also clear that “unjust discrimination or violence against a person or community or class of persons is always morally wrong.”

The Catholic Church teaches that “from the moment of conception onward, every human being has the innate dignity of bearing the image of God,” they wrote.

“All persons, including those who identify as ‘transgender,’ must always be treated with compassion, respect, and love.”

The bishops stated they had previously voiced “serious concerns” about Bill C-16.

These included fears the legislation will lead to “[q]uestions about freedom of speech, freedom of association, and freedom of religion.”

He told Canada’s Senate the bill would be used to enforce an “ideological” agenda.

Well-known conservative commentator Mark Steyn has also denounced the Liberal bill as an “Orwellian assault on the most fundamental language, the language which defines the two sexes.”

He echoed Peterson’s contention that under the Liberal bill, Canadians accused of “misgendering” fellow citizens — for example, not acknowledging their elected gender by refusing to use their preferred pronouns — could be fined or sent to jail.

He stated in March 2015 that “gender theory is an error of the human mind that leads to so much confusion” and “so the family is under attack.”

A month later, Pope Francis warned that gender theory “aims to cancel out sexual difference as it is no longer able to face it” but that “the removal of difference is the problem, not the solution.”

He told the Polish bishops in a private meeting during the August 2016 World Youth Days that it was was “terrible” to teach children “that everyone can choose their gender,” and cited his predecessor: “We must think about what Pope Benedict said — ‘It’s the epoch of sin against God the Creator.’”

Indeed, Pope Benedict has also condemned gender theory, notably pointing out in a 2012 Christmas address that gender theory is a fundamental attack on the nature of man, the family, and essentially a denial of God.

“The profound falsehood of this theory and of the anthropological revolution contained within it is obvious.”

The duality of male and female “is an essential aspect of what being human is all about, as ordained by God,” Benedict noted.