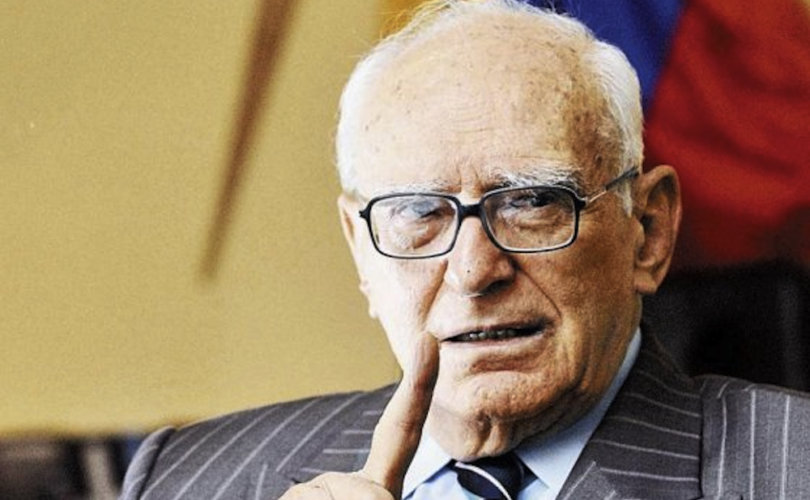 August 10, 2017 (LifeSiteNews) – A Catholic television channel that reaches millions of homes in Latin America was denounced by the Colombian bishops conference for “schism” after its statements rejecting Amoris Laetitia and denying the legitimacy of the Francis papacy.

Teleamiga, a well-known UHF and cable channel in Colombia that claims to reach 50 million homes in 35 countries, has insinuated for years that Francis was not legitimately elected and is an “anti-pope.” In his response, Teleamiga president José Galat doubled down on his claims.

“While it is true that a Catholic must love and submit to the legitimate successor of the apostle Peter, we ask ourselves if it must be given to a pope who wasn’t elected by God, but rather by men and, even worse, by a “mafia of cardinals,” which is the cynical expression that was used by the same Cardinal Godfried Danneels, which brazenly declared publicly that this mafia brought about the resignation of Benedict XVI and placed Francis into the papacy,” writes the 90-year-old Galat on his Facebook page.

“The uncanonical election of Francis indicates its undoubtable illegitimacy of origin, to which was later added an illegitimacy of its exercise by teaching doctrines contrary to the Catholic faith,” adds Galat.

As LifeSite has previously reported, Cardinal Danneels has publicly acknowledged that he helped to organize a group of high-ranking Catholic prelates who sought to place Archbishop Jorge Bergoglio on the papal throne, a goal that was ultimately fulfilled in 2013. However, Danneels has never indicated that he pressured Pope Benedict XVI to resign from his office.

In their condemnation of Telamiga, the Episcopal Conference of Colombia expresses “from the heart our union with the Holy Father,” and adds that it receives “with filial disposition, his Magisterium and his pastoral leadership,” lamenting that the Teleamiga program, “A Coffee with Galat” (“Un Café con Galat”) seeks to “sow attitudes of alienation and of doubt in the believing public with regard to the validity of the pontificate of Pope Francis.”

The episcopal conference does not specifically excommunicate or penalize any person in the statement, confining itself to condemning Teleamiga programming and warning that “the Teleamiga channel does not represent nor reflects the teaching of the Catholic Church; therefore, it cannot call itself a ‘Catholic channel.’” It also cites the Church’s law defining the canonical offense of schism, claiming that Teleamiga, “insofar as it rejects submission to the pope and gravely injures the communion of the Church, falls into schism and induces others to fall into it.”

The bishops lament that their attempts to dialog with Teleamiga have been fruitless. They urge the faithful to cease viewing the channel and warn priests and religious not to associate with it, or to celebrate the Mass or carry out Eucharistic adoration in the channel’s chapel lest they incur canonical penalties.

Galat and the rest of the channel’s leadership has responded by recalling a long list of statements and acts by Pope Francis that they argue constitute heresy. Included are Francis’ statements contained in the apostolic exhortation Amoris Laetitia that seem to endorse permitting Holy Communion to those living in invalid second marriages, his apparent affirmation that no one is condemned to hell, and his decree apparently permitting the canonization of non-Catholic saints. They also oppose Francis’ trip to Colombia to support a recent peace agreement with the Marxist guerillas of the Revolutionary Armed Forces of Colombia (FARC), whose struggle to impose communism on the country has cost thousands of lives over several decades.

As Galat’s on-air commentaries have grown in their hostility to Pope Francis, he has faced opposition from members of his staff, including former station manager and Teleamiga co-founder Diego Arango Osorio, whom he fired in February 2016 for objecting to his attacks on the Francis papacy. In December of the same year, he fired Fr. Juan Guillermo García, who was a professor at the Gran Colombia University and a grandson of the university’s founder, for expressing his disagreement with Galat’s line on Francis.