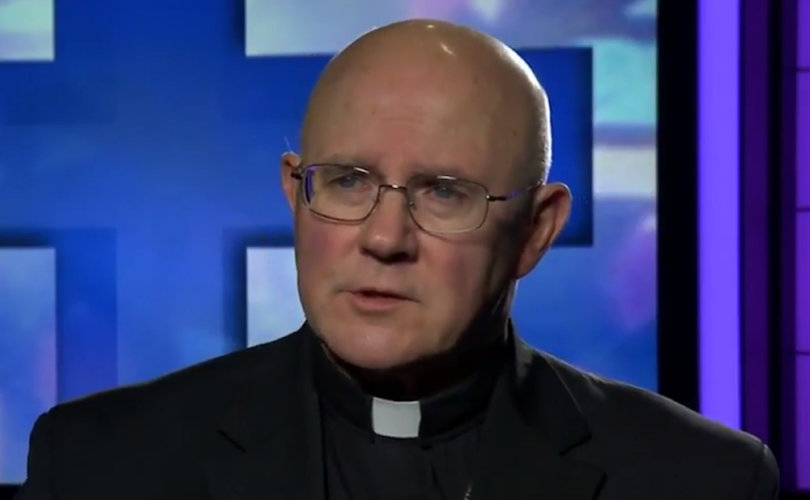 GREAT FALLS, Montana, April 24, 2018 (LifeSiteNews) — A Montana bishop is standing by Church teaching on homosexuality and marriage in a controversy triggered after one of his priests pointed out on social media how a Catholic school fundraiser was publicizing a gay couple as event co-chairs.

Any group affiliated with the Catholic Church needs to adhere to Church teaching, Great Falls-Billings Bishop Michael Warfel told LifeSiteNews, including those serving in a leadership position.

And while he says there are better avenues for addressing scandal than Facebook, Warfel supported the defense of Catholic principle undertaken by his priest, and agreed that the situation needed to be addressed.

Controversy arose after the priest posted on Facebook about a flyer for the upcoming Billings Catholic School Foundation annual fundraiser, which featured a same-sex couple atop the list of event chairs while the other chairpersons consisted of two married couples.

Father Ryan Erlenbush, a diocesan priest and alumnus of Billings Catholic Schools, was critical of the Billings Catholic School Foundation's (BCSF) choice to feature a homosexual couple as chairs for the fundraiser. He said the school system had lost its way and let the people down, and he questioned why Catholics would support the event.

“What does a Catholic school have to do before people say ‘enough’ and take their kids (and their money) elsewhere?” he asked. “I’m an alumnus of the Billings Catholic Schools, and I say, ‘enough.’”

Media reports said Erlenbush called for a boycott. Some reports included mention of Pope Francis advocating a more inclusive approach to homosexual-identifying individuals, and also the pope’s frequently misemployed “Who am I to judge?” comment.

Some reports went into gauging responses pro and con to Father Erlenbush’s Facebook post, which has subsequently been removed, and included BCSF leadership defending the decision. One report had Warfel saying he did not take issue with Erlenbush’s comments, but that they could have been better communicated.

Homosexuality and same-sex relationships are a sensitive, polarizing issue in secular society and in the Church, Warfel told LifeSiteNews, and he confirmed his thought that there were better ways than social media for the issue to have been addressed.

But he made it clear that the subject needed to be addressed.

“I would have much preferred someone call me directly and then I could have handled it,” he said.

LifeSiteNews did not hear back on an inquiry to the Billings Catholic School Foundation.

Warfel was also clear in stating that those serving in leadership roles associated with the Catholic Church must exhibit adherence to Catholic principles.

“None of us are angels,” Warfel told LifeSiteNews, “but there has to be some objective criteria.”

He said he understands the male couple serving as chairs for the BCSF fundraiser to be nice people, and he does not doubt their intent in wanting to support the foundation’s goals.

He noted, however, that on one or the other of the men’s Facebook page, it’s stated that they’re married, “which means they’re disqualified from serving in such a capacity.”

That the foundation would feature them as event chairs is a problem for a number of reasons, he said.

First, it indicates that the diocese and its bishop are supportive.

“And,” he said, “it sets up a sense of theological scandal, because it causes people to wonder if this is what the Church teaches – which is not true.”

Consequently, Bishop Warfel will not attend the event this year, which he normally does, because it would send a message contrary to Church principles.

“I’m not going to be there,” he told LifeSiteNews.

“Someone who’s objectively living in a way that is manifestly opposed to Church teaching,” he said, “it’s a problem.”

Warfel stood by one of his priests in 2014 after the priest told a homosexual couple in his parish that they cannot receive Communion or participate in Church ministry because they contracted a civil marriage.

He doesn’t plan at this time to act further on the matter in order to avoid more turmoil,  but he did send a letter to diocesan parishes to distribute in this past weekend’s bulletin.

The letter affirmed his support for Catholic schools and for children there to receive “a solid presentation of Catholic faith in the areas of doctrine and moral life.”

It clarified the foundation was its own organization and Warfel was not involved in planning the event or its choice of chairpersons.

Warfel’s letter also explained the context surrounding the pope’s “Who am I to judge?” comment and said Francis wrote later on this subject in a book urging frequent Confession as a means to address it.

Warfel closed his letter quoting the Catechism of the Catholic Church Nos. 2357-2359 on homosexuality.

Going forward, he told LifeSiteNews, any organization that hopes to retain the name Catholic would be expected to accept the Church’s teaching.