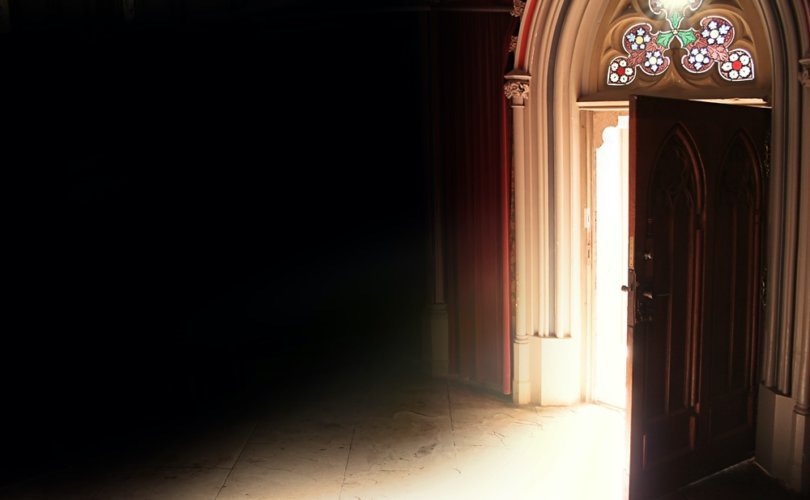 LOUISVILLE, Kentucky, August 5, 2020 (LifeSiteNews) – Archbishop Joseph E. Kurtz is defying Democratic Kentucky Governor Andy Beshear’s suggestion he suspend in-person Sunday worship for two weeks. Kurtz is the Archbishop of Louisville and served as the president of the United States Conference of Catholic Bishops from 2013 until 2016.

“In a letter to priests July 25, Archbishop Joseph E. Kurtz said parishes in the Archdiocese of Louisville would continue holding Masses at reduced capacity and ask pastors to ‘double down on issues such as social distancing and mask wearing,’” reported the weekly diocesan newspaper The Record.

“The Catholic bishops of the Commonwealth of Kentucky discussed this request late this week and decided not to ask parishes to suspend worship because of the very good job Catholic parishes have been doing with what has been asked of us, e.g. social distancing, mask-wearing, hygiene, cleaning, etc. and because of possible confusion on the part of the faithful,” Kurtz wrote.

“I also am aware that many of you have already scheduled weddings (some of which had been previously canceled), funerals, and so on. We sent a letter summarizing our thoughts to Rev. Kent Gilbert, president of the board of the Kentucky Council of Churches and copied Rocky Adkins, senior advisor to Governor Beshear.”

Governor Beshear had suggested suspending religious services for two Sundays after consulting with the Kentucky Council of Churches.

“In the vast majority of our parishes, prudent caution on the part of our people has kept our crowd sizes well within the capacity guidelines,” the bishops wrote to the Kentucky Council of Churches. “Given the rising number of cases, attendance may decline further.”

While the number of cases has indeed increased since early July, the seven-day average of deaths per day has remained under 10 deaths ever since the coronavirus outbreak in the state. In almost five months, fewer than 800 deaths have been attributed to COVID-19.

The bishops emphasized they would insist on the faithful wearing masks during Mass.

Conservative writer Daniel Horowitz has pointed out that state governments like California had said in the context of wildfires, “Surgical masks, dust masks, bandanas or other face coverings do not offer protection from particle pollution. Inexpensive paper ‘comfort’ or ‘dust’ masks commonly found at hardware stores are designed to trap large particles and do not provide enough protection for your lungs.”

Horowitz added, “SARS-CoV-2 particles are even smaller, between 60-140 nanometers, which is approximately 1/10th the size of the smoke particles for which masks don’t help.”

In mid-March, Governor Beshear urged the bishops, as well as other religious leaders, not to allow any worship services.

On March 16, the Archbishop Kurtz and the other bishops in Kentucky banned public Masses.

Two months later, on May 11, Kurtz released a plan to restart public Masses, beginning on May 20.

The guidelines asked parishes to implement numerous measures to spread the coronavirus from spreading. “Limit the available seating in your church to allow for social distancing,” the document told priests. They were also asked to provide hand sanitizer.

“Church choirs should not gather and sing together. Choir members should sit among the assembly. It might be helpful to reduce the amount of congregational singing in the initial stages of reopening and use instrumental music and/or music for the cantor only,” according to the guidelines.

On masks, the document stated, “During this initial period of re-opening, all parishioners should wear face coverings or masks when attending Mass. Require any liturgical minister to wear a mask or face covering with the exception of cantors or lectors while they are singing/reading. Priests and deacons should wear masks or face coverings when distributing Communion.”

At the same time, Archbishop Kurtz said that “an individual not wearing a mask should not be denied admittance.”