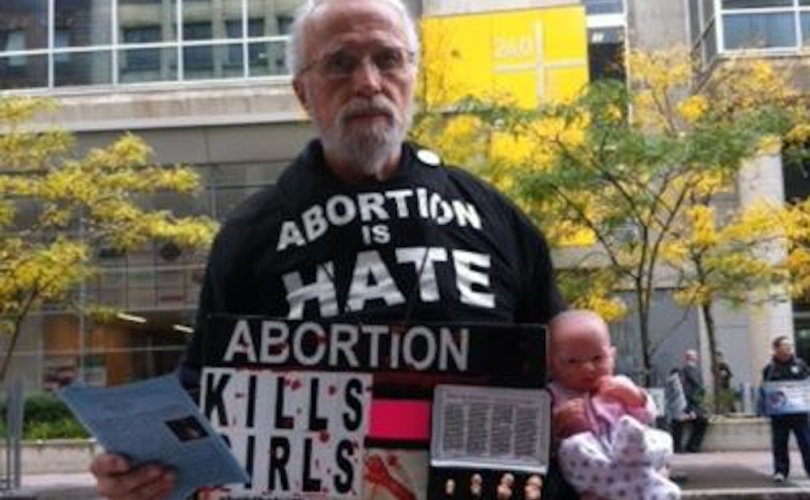 OTTAWA, Ontario, April 24, 2017 (LifeSiteNews) – The director of operations at Ottawa’s busy abortuary has made serious allegations against pro-life demonstrators outside her clinic and also claims that the police won’t protect her customers.

Cyril Winter, 69, who was pictured in the Ottawa Citizen carrying a sign showing fetal body parts, told LifeSiteNews the stories were “vicious, lying and libellous.” Frank Barrett, an 89-year-old ex-RCMP officer, said the claims made by Hodson were “ridiculous untruths.”

The media reports began with an April 19 column by the Toronto Star’s Heather Mallick. In a piece headlined “Ottawa police won’t protect abortion clinic despite pleas,” Mallick called the pro-life demonstrators “omnipresent and creepy, some unwell, and some threatening.”

In the same column, Mallick displayed the same reluctance to recognize the truth about abortion when she comments on a sign proclaiming “Holding Life Sacred.”

Mallick then conveyed Hodson’s allegations that the pro-lifers are outside “harassing patients, their companions, and staff” with the threat of physical attack.

Next Hodson attacked the police, who she said not only ignore her complaints but “react angrily when the clinic reports the infraction. They have threatened to charge clinic staff with obstruction or harassment if they continue to call for help.”

Finally, Mallick introduces a specific instance. A young pro-lifer who earlier this month entered the building and went through the halls sprinkling water and praying aloud. Could it have been kerosene, Mallick wonders, asserting that “the use of accelerants by protesters is increasing. Last week, a Toronto church was set on fire by a man using accelerant in a large water-dispensing bottle.”

The Ottawa Citizen followed up with a news story under the headline “Patients, staff at breaking point” that did not include any comment from the pro-life demonstrators.

Hodson, reported the Citizen, insisted “antagonism among Canadian anti-abortionists is rising,” and even blamed the election of Donald Trump as U.S. president.

Again, Hodson raised only a single example of so-called harassment. A couple came to have their baby, who had died in the womb, removed at the clinic, rather than wait for a natural delivery. “They were spit on, on their way in,” Hodson claimed. Apparently, nobody reported the obvious assault to the police.

“I’m the one who got spit on,” Winter told LifeSiteNews. “They came out the door and spat on me. I get harassed all the time. And these articles have unleashed a torrent of abuse.”

Winter has never seen any crowds of demonstrators standing outside the clinic doors, where he stands for five hours a day, several days a week. “I’m the only one who stands on this side of the street,” he said.

Winter has been at the clinic for six years, but only crossed the street to the clinic four years ago. Mallick’s claims this is illegal are false, he insisted. This is why the police have not removed him.

“The bylaw prevents a group from being here, which is why I am always alone,” Winter told LifeSiteNews. Nonetheless, for three weeks after he first crossed the street, the police harassed him, laying several charges against him, including one for blocking access to the bus. However, they proceeded on none of these.

The incident of the young man sprinkling water on the building’s inside hallways did happen, said Winter. “I witnessed it when they carried him out.” Winter called it a “sad case” that “did the pro-life movement no good.” The young man was emotionally out of control and using strong language. He came back again and told police he would keep coming. “He’s out on bail,” Winter said.

Frank Barrett told LifeSite that the pro-lifers are not assembling in a large group.

Barrett has never seen any pro-lifer behave in a threatening or abusive manner, nor even “crowd” the doorway. “These claims are ridiculous. They are telling untruths.”

The Ottawa police deny they are ignoring Hodson’s complaints.

“All reported incidents are taken seriously and investigated. Where warranted we enforce applicable laws,” Police Chief Charles Bourdeleau said in a statement.

He had only one example, however, of an incident requiring police action: the young man who came to sprinkle water.

This led to a trespassing charge, he said. But removal of demonstrators simply to relieve the concerns of abortuary customers or staff “must be carefully considered, ensuring that the enforcement is not in contravention of the Canadian Charter of Rights and Freedoms.”

Bourdeleau suggested the clinic could get an injunction as several abortion facilities in Toronto and Montreal have done. Mallick, however, claimed this was an expensive process. “It’s all about dollars for them,” commented Winter.