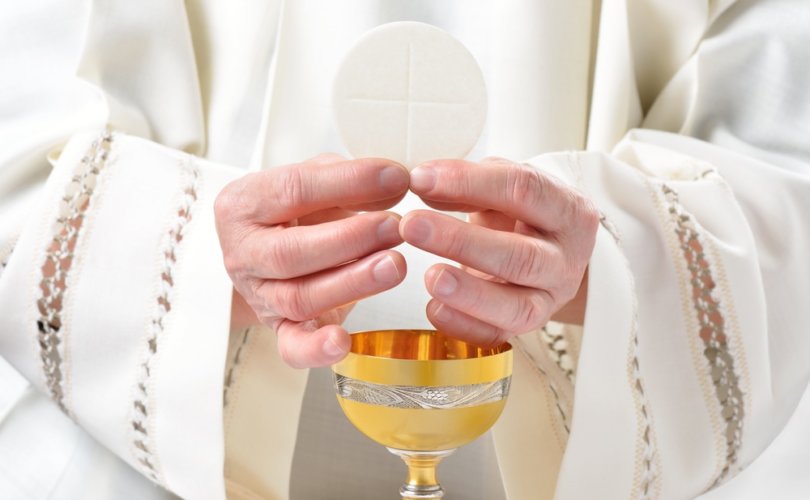 March 26, 2020 (LifeSiteNews) – The bishops of Buenos Aires, led by Archbishop Mario Aurelio Poli, are reminding priests of their “grave responsibility” to bring the sacraments to those who request them during the COVID-19 emergency, and say that the nation’s bishops’ conference has worked out an arrangement with the government to exempt priests from travel restrictions so that they can do so.

In a letter sent to the clergy entitled, “It is time to bring the consolation of the sacraments,” Archbishop Poli and his auxiliaries note that Pope Francis has encouraged priests to go out to those who are sick to give them sacramental grace, particularly in the form of “viaticum,” which is the bringing of the Eucharist to those who are in danger of death.

They quote Francis as saying, “Let us pray to the Lord also for our priests, so that they may have the courage to go out to the sick, bringing the power of the Word of God and the Eucharist, and that they might accompany the health workers, the volunteers, in this labor that they are doing.”

“These words come to us with all of their insistence,” write the bishops, “and we want to take up this present moment by generously offering the gift of ministry that we have received.”

The content of the letter was reported to the public by the bishops’ Catholic Information Agency of Argentina (AICA), on March 23.

The bishops recall similar cases of epidemics that have struck Argentina, such as the yellow fever epidemic of 1871, and the cholera epidemic in the city of Córdoba in 1868. They note that according to one account, 67 priests died giving the sacraments to the dying in 1871. They also invoke the example of the Argentinean saint Jose Gabriel del Rosario Brochero, who attended to victims of the cholera epidemic. Brochero is known to have died with leprosy because of his ministry to lepers.

“Encouraged by this cloud of witnesses that preceded us in social charity, we expect priests to help us to reflect on what is the best way to carry out our ministry, to take up the present moment in the face of the pandemic that has been unleashed in the world and that has begun to show signs of its presence in the population,” the bishops write.

“Let us think about what will be our contribution to the movement in solidarity that has unfolded in these days, with the consciousness of knowing, that through the gift that has been received, we have the grave responsibility to bring the consolation of the sacraments to those who ask for them.”

Exemption from lockdown given to religious ministers in Argentina

The bishops write that the Argentine Episcopal Conference has intervened to secure an exception from obligatory social isolation for religious ministers “so that they can fulfill their spiritual ministry in favor of the sick and elderly, and bring viaticum to those who are in extreme danger of death.” They add that this proposal was “very well received by the national authorities,” and that the government of the City of Buenos Aires immediately implemented the recommendation.

“This regulation includes a certification that an individual is a priest and at the same time explains the motive for which he is being transported,” write the bishops. “We recall that the regulation only permits such movement for extreme cases of spiritual care, and not for any other reason. It is necessary to go to the website indicated by the Directorate of Organizations and Worship to be registered on line.”

The statement comes at a time when Catholic priests in many jurisdictions worldwide are prohibited from offering the Mass publicly, and are unable to offer Holy Communion to the faithful, nor even the sacrament of the anointing of the sick, which is given to the dying for their spiritual and physical healing.

In Italy, for example, public Masses are prohibited, and priests are not permitted to give the anointing of the sick, also known as “extreme unction,” to those who are dying. It appears that the bishops have made no arrangements with the authorities to override these restrictions. The same is currently true in the city of Guadalajara in Mexico, where priests have been told that they will not be admitted to hospitals to give extreme unction. In the U.S., two hospitals in Michigan are also refusing to allow priests to visit dying patients.