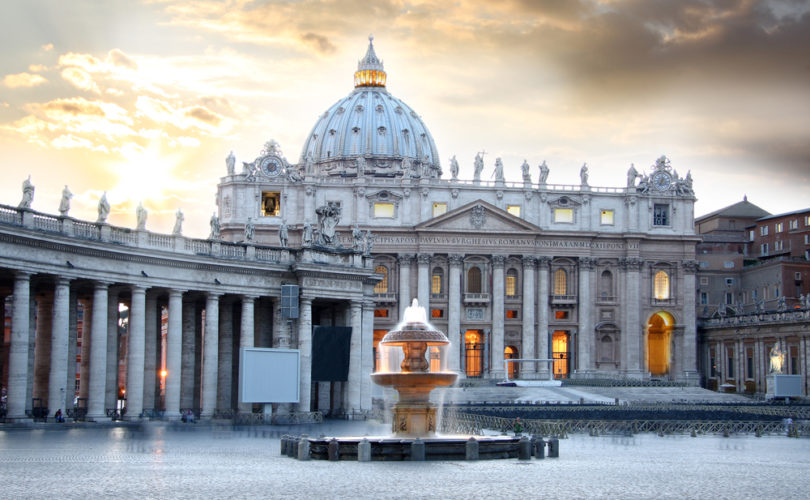 ROME, October 1, 2019 (LifeSiteNews) — In view of the upcoming Amazonian Synod, an international group of Catholic prelates, priests and laity, who have chosen to remain anonymous due to a “climate of intimidation” in the Church, today addressed a brief statement to Pope Francis and the synod fathers identifying four areas of the working document which they say are “contradictory” to the Catholic faith.

The Oct. 1 statement (see below), issued by a group which calls itself the Coetus Internationalis Patrum Working Group (International Group of Fathers), states:

We, numerous bishops, priests, and Catholic faithful from all over the world, hereby affirm that the Instrumentum Laboris prepared for the coming Synodal assembly raises serious questions and very grave reservations, because of its contradiction of individual points of Catholic doctrine which have always been taught by the Church, as well as its contradiction of faith in Jesus Christ, the One Savior of all mankind.

Using what it calls a “classical method,” the group summarizes into four “propositions” or “theses” the main points of the Instrumentum Laboris, which they regard as “unacceptable.” The group then contrasts them specific magisterial texts to support their position.

Edward Pentin of the National Catholic Register, who was among the first to report on the statement, explained that the group is named after “the most influential interest group at the Second Vatican Council which submitted numerous amendments to conciliar documents in a bid to uphold tradition.”

He also noted that, “although ‘numerous’ bishops, priests and laity share the concerns, no names will be revealed ‘because of the growing climate of intimidation and purges present in the Roman Curia and in the Church in general.’”

The Instrumentum laboris will form the basis of discussions at the Oct. 6-27 Special Synod of Bishops on the Amazon, being held at the Vatican.

The first area of concern noted by the group is the working document’s call to respect “Amazonian diversity” which means “to recognize that there are other paths to salvation, without reserving salvation exclusively to the Catholic faith.” The working document calls on the Church to “integrate” other non-Catholic Christian “modalities” of “being Church.”

The group of prelates, priests and laity contrasts this assertion with the teaching of Dominus Iesus, the declaration issued by the Congregation for the Doctrine of the Faith in 2000, which reiterates that “the universal salvific will of the One and Triune God is offered and accomplished once for all in the mystery of the incarnation, death, and resurrection of the Son of God” (14) and “the unicity (oneness and uniqueness) of the Church founded by him” (16) must be “firmly believed as a truth of Catholic faith.”

The second area of concern is the working document’s assertion that Pan-Amazonian theology is required in all educational institutions (IL 98, c3) and the proposal that the Church “adapt the Eucharistic rite to their cultures” (IL 126 d).

The group rejects this assertion again on the basis of Dominus Iesus, which reiterates that “it would be contrary to the faith to consider the Church as one way of salvation alongside those constituted by the other religions.” While affirming that “some prayers and rituals of the other religions may assume a role of preparation for the Gospel,” it firmly states that “one cannot attribute” to them a “divine origin” or the “salvific efficacy” which is “proper to the Christian sacraments.”

The third point of contention is the notion that the “territory [of the Amazon] and the cry of its peoples” is in some way a place of revelation and source of theology — like Sacred Scripture, the Councils and the Fathers of the Church.

The Coetus Internationalis Patrum rejects this notion, citing the Vatican II dogmatic constitution on divine revelation Dei Verbum, which reasserts the nature of divine revelation, its closure with the death of the last Apostle, and the sacred bond between Tradition, Sacred Scripture and the teaching authority of the Catholic Church (4, 7, 10).

Lastly, the group rejects the “new vision of Holy Orders” proposed by the synod’s working document, which they argue “does not come from Revelation, but from the cultural usages of the Amazonian people.” This new vision includes the proposal that “ordination be conferred on older persons who have families” and that “official ministries” be conferred on women.

The group opposes this “new vision” on the basis of five magisterial texts, including the Vatican II dogmatic constitution on the Church, Lumen Gentium, and its decree on the ministry and life of priests,  Presbyterorum Ordinis; Pope Paul VI’s encyclical on priestly celibacy, Sacerdotalis Coelibatus; Pope John Paul II’s apostolic exhortation on the formation of priests, Pastores Dabo Vobis; and his apostolic letter on reserving the priesthood only to men, Ordinatio Sacerdotalis.

Today’s statement comes as the latest in a chorus of voices criticizing the synod’s working document. In June, German Cardinal Walter Brandmüller, president emeritus of the Pontifical Committee for Historical Sciences, warned that “decisive points” in the working document are “heretical” and that “inasmuch as even the fact of Divine Revelation is here being questioned or misunderstood” we may speak of “apostasy.”

Here below is the full statement by the Coetus Internationalis Patrum Working Group (International Group of Fathers).

To the Pope and the Synod Fathers:

We, numerous bishops, priests, and Catholic faithful from all over the world, hereby affirm that the Instrumentum Laboris prepared for the coming Synodal assembly raises serious questions and very grave reservations, because of its contradiction of individual points of Catholic doctrine which have always been taught by the Church, as well as its contradiction of faith in Jesus Christ, the One Savior of all mankind. We have drawn up, following the classical method, four propositions in the form of “theses” summarizing the main points of the Instrumentum Laboris. In conscience and with great frankness, we affirm that the teaching of these theses is unacceptable.

1. Amazonian diversity, which is above all religious diversity, evokes a new Pentecost (IL 30): respect for this diversity means to recognize that there are other paths to salvation, without reserving salvation exclusively to the Catholic faith. Non-Catholic Christian groups teach other modalities of being Church, without censures, without dogmatism, without ritual disciplines and ecclesial forms (IL 138); the Catholic Church ought to integrate these modalities. Reserving salvation exclusively to the Creed is destructive of the Creed (IL 39).

Against this, among other texts: Dominus Iesus 14 and 16.

2. The teaching of Pan-Amazonian theology, which takes special account of myths, rituals, and celebrations of indigenous cultures, is required in all educational institutions (IL 98 c 3). Non-Christian rites and celebrations are proposed as “essential for integral salvation” (IL 87) and we are asked to “adapt the Eucharistic rite to their cultures” (IL 126 d). On rituals: IL 87, 126.

Against this: Dominus Iesus 21.

4. It is suggested that ordination be conferred on older persons who have families and to confer “official ministries” on women. There is thus proposed a new vision of Holy Orders which does not come from Revelation, but from the cultural usages of the Amazonian people (which provide for a rotating system of authority, among other things). Therefore, there ought to be separation made between the priesthood and the munus regendi (IL 129 a 2, 129 a 3, 129 c 2).