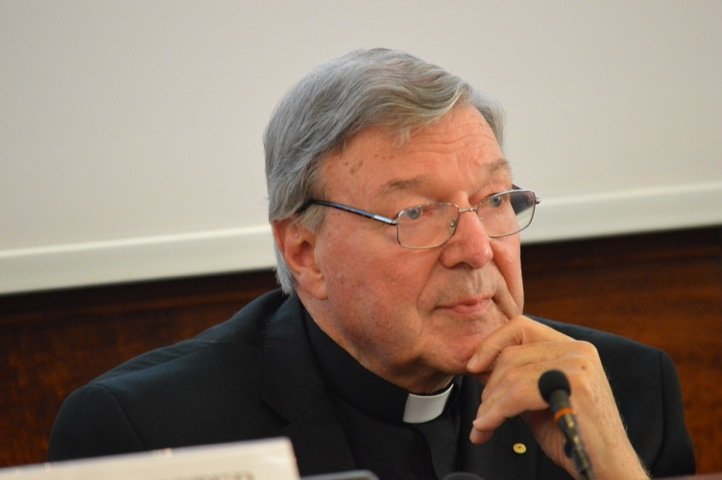 Cardinal George Pell, a leading voice for orthodoxy in the ongoing Synod of Bishops on the family in Rome, has said that  small group of “radicals” has failed in their attempt to push the Synod to accept homosexuality, cohabitation, and other changes of Catholic moral teaching.

Cardinal Pell said, “We’re not giving in to the secular agenda. We’re not collapsing in a heap. We’ve got no intention of following those radical elements in all the Christian churches including some of the Catholic Churches in one or two countries and going out of business.”

“If people are heading in the wrong direction, it’s no virtue for the Church to say that’s good. A lot of people that are outside and don’t accept our views will welcome it,” he said. “But certainly not the people in the pews, the good people.”

Today’s news in the Italian press is full of the story of the general revolt of the Synod bishops against what they argue are the attempts made by the Synod’s own administration to control the message and promote the views of this small “radical” cadre.

In his interview with Catholic News Service, Cardinal Pell, a member of Pope Francis’ inner council and the prefect of the newly formed Secretariat of the Economy, all but identified a cabal working to control the Synod.

Cardinal Pell said the issue of giving Communion to divorced and remarried couples is supported by “very few, certainly not the majority of the synod fathers.” But he added that “it’s only at the tip of the iceberg. It’s a stalking horse. They want wider changes: recognition of civil unions, recognition of homosexual unions.”

“The Church cannot go in that direction,” because “it would be a capitulation from the beauties and strengths of the Catholic tradition.”

Despite the attempts by the Synod’s Secretary General, Cardinal Lorenzo Baldisseri, to restrict the message of the bishops' working groups this week to summaries, written by himself, the bishops are reported to have risen up as a body and demanded that a full report of their deliberations be released to the public. After a series of speeches against Baldisseri’s proposal, an announcement by Father Federico Lombardi that the bishops’ full documents were to be published was met with a standing ovation while Pope Francis is said to have remained silent and impassive.

“The Synod fathers decided unanimously this morning to publish the summaries, the ‘relationes’ from the different working groups,” Cardinal Pell said, “because we wanted the Catholic people to know actually what was going on in talking about marriage and the family. And by and large, I think people will be immensely reassured.”

The story of the bishops’ revolt is the talk of Rome, with a report by Matteo Matzuzzi in the Italian newspaper Il Foglio, saying that the offer of yet another summary of their discussions was the last straw for the bishops. Cardinal Pell spoke first, but was followed by a long line of others, including the Archbishop of Brussels, Andre-Joseph Léonard; Cardinal Wilfrid Napier of Durban, South Africa; and the Cardinal Secretary of State, Pietro Parolin.

Cardinal Christoph Schönborn told the press, “The decision to render public the relationes of the circuli was taken by large majority.” Il Foglio noted that the texts “are clear, and go in an opposite direction as the one upheld by Cardinal Walter Kasper.”

The first document from the Synod to be published, called the “Relatio,” issued on Monday, suggested, among other troubling passages, that the bishops wanted the Church to learn to “value and accept” the homosexual “orientation.” Cardinal Pell called this document “tendentious,” and “skewed.”

“It didn’t represent accurately the feelings of the Synod fathers, because in the immediate reaction to it…three quarters of those who spoke had some problems with the document,” the cardinal said.

Pell criticized the Relatio again, saying, “A major absence was scriptural teaching. A major absence was the treatment of the Church tradition. It was as though there was an idealized vision of every imperfect [marital] situation.”

“One father said to me about the earlier document, that he wouldn’t want his young adult children to read it because they’d be confused. And that was said in some of the working groups,” the cardinal added.

“Christ’s teaching on marriage,” he said, “is not put there as a burden, it works in the long run. It’s there to protect us. And the secret for all Catholic vitality is fidelity to the teachings of Christ and to the tradition of the Church.”

He said that Pope Francis emphasis on these teachings being “lived out in mercy, and love,” have been “a wonderful emphasis.”

“Our task now is to ask people to pause, to pray, to catch their breath. To realize there’s going to be no abandonment of Catholic doctrine and to work to diminish the divisions and to prevent any radicalization of the factions or points of view,” Cardinal Pell said.