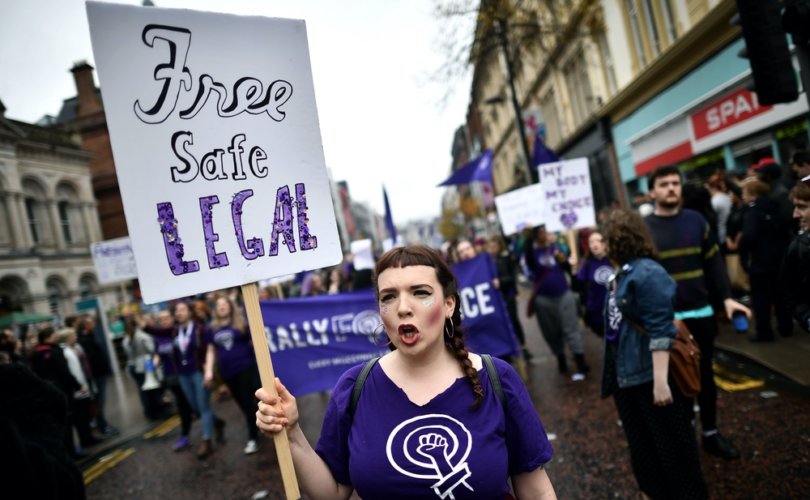 Update on December 20, 2019 at 1:07 p.m.: The bishops of Northern Ireland have released a statement saying they are ‘completely opposed’ to abortion in Catholic schools.

December 13, 2019 (LifeSiteNews) – Pro-life activists in Northern Ireland have said that the statements made thus far by the Catholic bishops there fail to adequately address the radical new abortion laws recently imposed on the region.

Notably, the new abortion regime will force Catholic schools to refer girls for abortions without telling their parents. Pro-lifers are concerned about the bishops’ lack of acknowledgement of this reality.

The guidance notes that the passing of the abortion law was “tragic” and states that the new laws are unjust and should be resisted. The bishops say:

Any human law that removes the right to life is an unjust law and must be resisted by every person, every voter, every political representative. For Catholic politicians this is not only a matter of protecting the human right to life but also a fundamental matter of Catholic faith.

The bishops urged people to “pray for a society which respects the equal right to life and care of a mother and her unborn child” and also asked that voters “inform themselves about the position of candidates standing for election in respect of their willingness to support and cherish equally the lives of mothers and their unborn children.''

But pro-life campaigners are concerned that there has been no statement by the bishops regarding the fact that the legislation will require schools, including Catholic schools, to direct pregnant students for abortion.

A 2018 report made by the United Nations Convention on the Elimination of All Forms of Discrimination against Women (CEDAW) recommended with regard to abortion in the U.K. and Northern Ireland that the government introduce mandatory sex education which included. Section 86 (d) of that report reads:

The Committee recommends that the State party:

(d) Make age-appropriate, comprehensive and scientifically accurate education on sexual and reproductive health and rights a compulsory component of curriculum for adolescents, covering prevention of early pregnancy and access to abortion, and monitor its implementation

Liam Gibson, Northern Ireland political officer for the Society for the Protection of Unborn Children (SPUC), told LifeSiteNews that the Catholics bishops have “yet to acknowledge that under the new regime, schools, including Catholic schools will be required by law to direct girls for abortion without even informing parents.”

The bishops have yet to acknowledge that under the new regime, schools, including Catholic schools will be required by law to direct girls for abortion without even informing parents. The potential for an abuser to procure an abortion for his victim and continue the abuse is wide open. If this happens it would be a complete betrayal of parents who place their trust in these schools to teach in accordance with the Catholic faith and to keep their children safe.

There is also the very real threat that so-called flexibility in the new regime will open the way to schools being designated as places suitable for performing abortions. If the bishops don’t act now to stop this Catholic schools will be providing girls with secret abortions and the Church will be culpable for the deaths that take place in their schools.

All this will happen unless Catholic parents demand that the bishop stand up to the government and refuse to allow their schools to become the killing grounds of countless unborn children. Even if the government threatens to withdraw state funding, the issue of abortions in Catholic schools is not negotiable. Abortion is an act of lethal violence directed at an innocent child and there is no acceptable level of violence against children.

LifeSiteNews contacted the communications office of the Irish Episcopal Conference, but did not receive a response by press time.