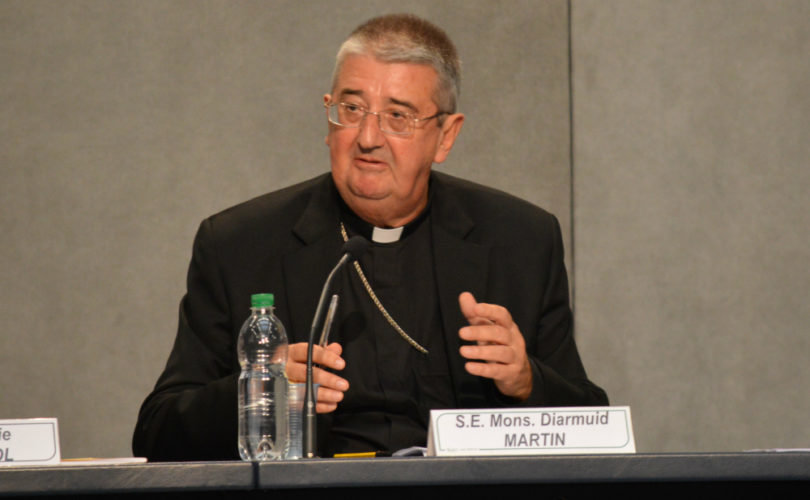 DUBLIN, Ireland, October 17, 2017 (LifeSiteNews) — Catholic bishops in Ireland are using Pope Francis teachings on marriage and family to promote homosexual couples as a new form of “family” in the upcoming World Meeting of Families.

The World Meeting of Families is set to take place in Dublin next August. It is described on the official website as a major international event that “brings together families from across the world to celebrate, pray and reflect upon the central importance of marriage and the family as the cornerstone of our lives, of society, and of the Church.”

The event will focus on Pope Francis’ controversial 2016 Exhortation Amoris Laetitia (Joy of Love), highlighting the theme “The Gospel of the Family: Joy for the World.” Pope Francis is expected to attend the event.

Since Amoris Laetitia’s release in April 2016, more than a thousand Catholic academics and clergy (cardinals, bishops, priests) have voiced concern about the exhortation’s seeming incompatibility with Catholic moral teaching. Catholic philosopher Dr. Josef Seifert has demonstrated how the Pope’s teaching could be used to overturn Catholic teaching against contracepted sex and homosexuality.

Last month, dozens of Catholic clergy and lay scholars from around the world issued a Filial Correction to Pope Francis for “propagating heresy.” They asserted that Pope Francis has supported heretical positions about marriage, moral life, and the Eucharist that are causing a host of “heresies and other errors” to spread throughout the Catholic Church.

A program to prepare families for the upcoming World Meeting of Families has already been released under the oversight of Dublin Archbishop Diarmuid Martin.

Page 24 of the document, under the section “The Christian Vision for the Family,” contains a picture of two lesbians on a bridge clinging intimately to one another.

The photo shows a young woman in a sleeveless top being embraced by another young woman who is standing behind her. Tattooed onto one of the woman’s hands is an eye-catching “gay-pride” rainbow flag.

The text immediately above the photo reads: “While the Church upholds the ideal of marriage as a permanent commitment between a man and a woman, other unions exist which provide mutual support to the couple. Pope Francis encourages us never to exclude but to accompany these couples also, with love, care and support.”

Getty Images has the full photo of the two women embracing. Tags used for the photo include “lesbian,”  “homosexual couple,” and “gay rights.”

LifeSiteNews reached out to Archbishop Martin, who is overseeing the World Meeting of Families, and asked if the homosexual image and text was inserted into the program by mistake. No response was given.

The promotion of homosexuality at the World Meeting of Families by Irish bishops appears to be deliberate.

On Friday, October 13, Bishop Brendan Leahy of Limerick said homosexual couples must be welcomed at the World Meeting of Families.

Leahy, speaking to reporters after his diocese launched the pro-homosexual preparation program, said it would be a missed opportunity if the Church failed to embrace “family” in all its variety.

“We've had the referendum in favour of same-sex ‘marriage’ and a lot of people voted in that referendum and all are equally welcome to join in this celebration of family,” he said, as reported by the Independent.

“We are living in changing times and family too is changing,” he added.

Prior to this, in October last year, Archbishop Martin said Catholic bishops must not “allow ourselves to be become entangled in trying to produce definitions of the family,” because different cultural values mean family “cannot be defined simply.”

The Catholic Church, however, teaches that God created humans as “male and female” and gave them to each other in marriage so they could “increase and multiply.”

Sexual attraction, as well as the sexual act between a married man and woman, have been specifically created by God for the purpose of procreation. The Catholic Church remains true to God’s original creative plan when she declares authoritatively and for all time that homosexual acts are “acts of grave depravity” and “intrinsically disordered” since they are “contrary to the natural law” in that they “close the sexual act to the gift of life.”

Cardinal Carlo Caffarra, in one of his last presentations before he died, called homosexuality a work of Satan that “denies entirely the truth of marriage” as it comes from the “mind of God the Creator.” He said Satan is attempting to use homosexuality as a battering ram to destroy one of the main “pillars of creation,” namely marriage.

Following Saint Augustine, the Church holds that Christians must always “love” the sinner but “hate” the sin.

Anthony Murphy, founder and editor of Catholic Voice newspaper and the founder of Lumen Fidei Institute, said homosexuality is “anti-family” and has no place at a Catholic meeting of families.

“Are homosexual acts sinful or not? Our Catholic faith teaches us that they are. They are among the most anti-family acts of all. So what on earth are our Catholic leaders doing promoting homosexuality in the program that is supposed to help families prepare for the World Meeting of Families?” he told LifeSiteNews.

Murphy said that while the program gives a nod to homosexual behavior, it entirely fails to address Catholic moral teaching on chastity, contraception, and abortion.

“Leaving out any mention of abortion is a glaring omission at any time, but particularly in the Irish context, when we are about to have a referendum on whether or not our unborn can be legally killed,” he said.

Murphy said the organizers of the event are failing families.

“To give implicit approval to homosexuality, which the Church has always taught to be one of the four sins that cry to heaven for vengeance, while failing to decry abortion, is nothing short of a dereliction of duty,” he said.

Cardinal Caffarra told participants at a family conference in Rome last May that approval of homosexuality coming from all quarters shows that the “final battle”’ between God and Satan has come.

Caffarra, one of the dubia signers, outlined how Fatima visionary Sister Lucia once wrote to him after he had asked her for prayers as he founded the John Paul II Institute for marriage and family. She told him that the final battle between God and Satan will be over marriage and the family.

“What Sister Lucia said in those days is being fulfilled in these days of ours,” said Caffarra at that time.

The last World Meeting of Families took place in 2015 in Philadelphia and was attended by Pope Francis. Philadelphia’s mayor used a platform given to him at the event  in front of tens of thousands of Catholic pilgrims to promote the “rights” of homosexuals.

Readers who wish to respectfully make their concerns known to the organizers of the 2018 World Meeting of Families can do so by email: [email protected] or alternatively contact the Archbishop of Dublin: