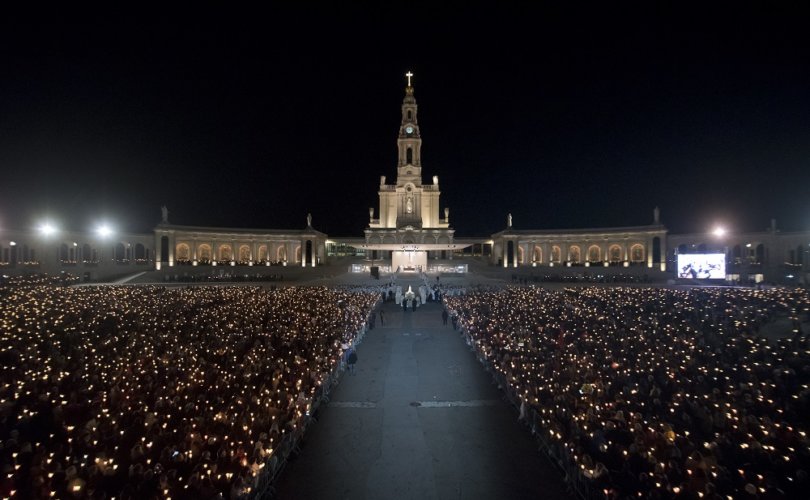 PORTUGAL, March 24, 2020 (LifeSiteNews) — Faced with the coronavirus crisis, the Church of Portugal will renew its consecration to the Sacred Heart of Jesus and the Immaculate Heart of Mary on March 25, at the end of the 6:30 P.M. rosary (1:30 P.M. New York time). Since the announcement of this initiative by the bishops of Portugal on Saturday, the bishops of Spain have asked to join this initiative. Following their request, the Portuguese episcopate this Monday offered the bishops’ conferences of the world to join in this “act of devotion.”

The prayer of consecration will be pronounced by Cardinal António Marto, Bishop of Leiria-Fatima.

It will take place in the Basilica of Our Lady of the Rosary on the Solemnity of the Annunciation of Our Lord. The ceremony will be broadcast live on the online page of the Shrine of Fatima, and, in Portugal, on television, on the radio, and on Christian-inspired digital platforms.

“All the dioceses will be united in the prayer of the Rosary for the intentions of the whole world and especially for Portugal, in this dramatic situation we are going through because of the Covid-19 coronavirus,” said a statement from the Permanent Council of the Portuguese Episcopal Conference (CEP) published last Saturday.

On October 20, 2019, the Bishops of Portugal consecrated the Catholic Church to the Sacred Heart of Jesus at the closing Mass of the missionary year at the Shrine of Fatima, also marking 175 years of the Apostleship of Prayer in Portugal.

The Shrine's website recalled that the first consecration of Portugal to the Immaculate Heart of Mary took place on May 13, 1931, eight months after the official recognition of the apparitions by the Bishop of Leiria, at the end of the first national pilgrimage of the Portuguese episcopate to Fatima. Before the consecration, the cardinal-patriarch, D. Manuel Gonçalves Cerejeira, declared:

The Bishops of Portugal, your pastors, are gathered here today to thank Our Lady of Fatima for the visit she has deigned to make to our land. In order that the ceremony of thanksgiving may be complete, they will consecrate their work and the destiny of Portugal to the Immaculate Heart of Mary. This consecration complements the national consecration to the Sacred Heart of Jesus made three years ago by the Portuguese Episcopate. By descending to Fatima, Our Lady made this place the new Portuguese Bethlehem. If in Bethlehem Our Lady gave the world Jesus, Jesus who is Truth, Life, Forgiveness and Peace, by coming down to Fatima, she gave us a new gift of her son.

Fatima has become the national shrine from which she repeats to all peoples: do whatever my Son tells you. Mother of God, we received Jesus only through your hands.

At the end of this speech, the cardinal pronounced the prayer of consecration. Later, in October 1942, the year in which the 25th anniversary of the apparitions was celebrated, Pope Pius XII consecrated the world to the Immaculate Heart of Mary with a radio message.

Referring to the ceremony next Wednesday, March 25, the Shrine’s website continues:

The Heart of Mary presented itself to Lucia from the very beginning, from the second apparition, as a refuge and a way that leads to God. Again, in July, after the vision of hell, she reaffirmed this by offering consecration to her Immaculate Heart as a means of conversion and reparation. Thus devotion to the Heart of Mary becomes, especially with the request for consecration of Russia and all that it would symbolize, an expression of the presence of God that accompanies the drama of human history, inviting believers to another vision of history, projected onto an eschatological dimension. In Pontevedra and Tuy, in the visions that closed the event of Fatima, the call to consecration was renewed, with the Reparatory Communion of the first Saturdays which is associated with it.

AciDigital announced that the bishops of Portugal will gladly accept requests from other bishops’ conferences in the world to join the consecration on Wednesday.

The requests will need to be made by the presidents of the bishops’ conferences or by the secretaries of these conferences on behalf of the presidents. They should be addressed to Dom Manuel José Macário do Nascimento Clemente, cardinal-patriarch of Lisbon, or to the general secretary of the Portuguese bishops’ conference, Fr. Manuel Joaquim Gomes Barbosa, at the following e-mail address: [email protected]