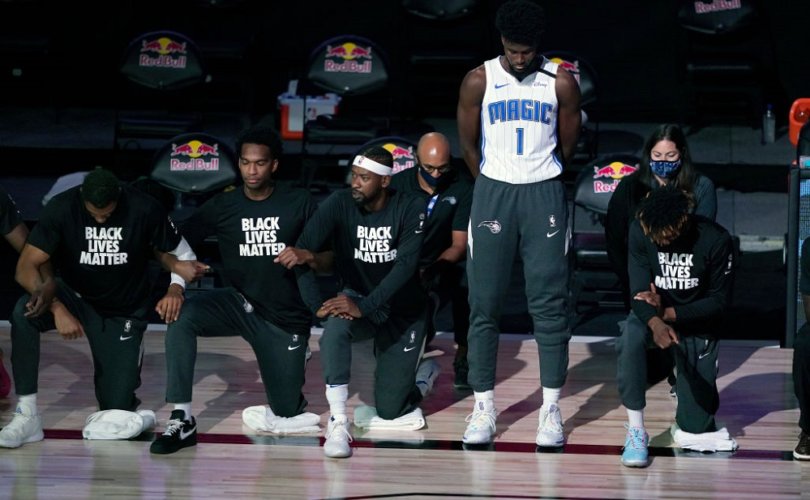 ORLANDO, Florida, August 3, 2020 (LifeSiteNews) — Black professional basketball player Jonathan Isaac has defended his decision not to kneel during the National Anthem and not to wear a Black Lives Matter shirt, saying such actions don’t necessarily go “hand in hand with supporting black lives.”

“All lives are supported through the Gospel,” the Orlando Magic forward, who is a Christian, said.

On Friday, Isaac was the only player of his team refusing to embrace Black Lives Matter messaging, as the NBA season started up again after a long interruption due to the coronavirus pandemic.

“The NBA has offered its support to players in providing them with a platform for social issues,” wrote sports website Bleacher Report. “The NBA has also placed a Black Lives Matter decal on its courts in Orlando during the NBA restart and has also allowed players to wear social justice phrases on the back of their jerseys in lieu of their names.”

Isaac pointed out how pointless wearing a Black Lives Matter shirt and kneeling during the National Anthem actually are.

“I believe that for myself, my life has been supported through the Gospel, Jesus Christ, and that everyone is made in the image of god, and that we all foreshadow God’s glory,” Isaac continued.

“I feel like we all make mistakes, but I think that the Gospel of Jesus Christ is that there’s grace for us and that Jesus came and died for our sins, and that if we all will come to an understanding of that and understand that God wants to have a relationship with us … we can get past all the things in our world that are messed up, jacked up,” he said.

“We want to get past not only racism,” he added, “but everything that plagues our society. I feel like the answer to it is the Gospel.”

At the end of July, a professional baseball player also refused to kneel in support of the Black Lives Matter movement as the 2020 Major League Baseball season got underway.

Sam Coonrod, pitcher for the San Francisco Giants, said he meant “no ill will” for refusing to take a knee in the league-approved moment of silence, saying that as a Christian, he believes he should kneel only to God.

“I don’t think I’m better than anybody. I’m just a Christian. I believe I can’t kneel before anything but God, Jesus Christ. I chose not to kneel. I feel if I did kneel I’d be a hypocrite. I don’t want to be a hypocrite,” Coonrod told reporters.

“I can’t get on board on a couple of things I’ve read about Black Lives Matter, how they lean toward Marxism and said some negative things about the nuclear family,” Coonrod added.

The Black Lives Matter organization, officially known as “BLM Global Network Foundation,” is advocating for positions contrary to what Christians believe. The organization supports abortion, writing, “We deserve and thus we demand reproductive justice that gives us autonomy over our bodies and our identities while ensuring that our children and families are supported, safe, and able to thrive.”

The term “reproductive,” usually used in combination with “health” or “rights,” is a euphemism for abortion and contraception.

Additionally, the organization wants to abolish the traditional family.

“We disrupt the Western-prescribed nuclear family structure requirement by supporting each other as extended families and ‘villages’ that collectively care for one another, especially our children, to the degree that mothers, parents, and children are comfortable,” the group wrote in its mission statement.

Black Lives Matter is also in favor of homosexuality and gender ideology. “We foster a queer‐affirming network. When we gather, we do so with the intention of freeing ourselves from the tight grip of heteronormative thinking, or rather, the belief that all in the world are heterosexual (unless s/he or they disclose otherwise).”