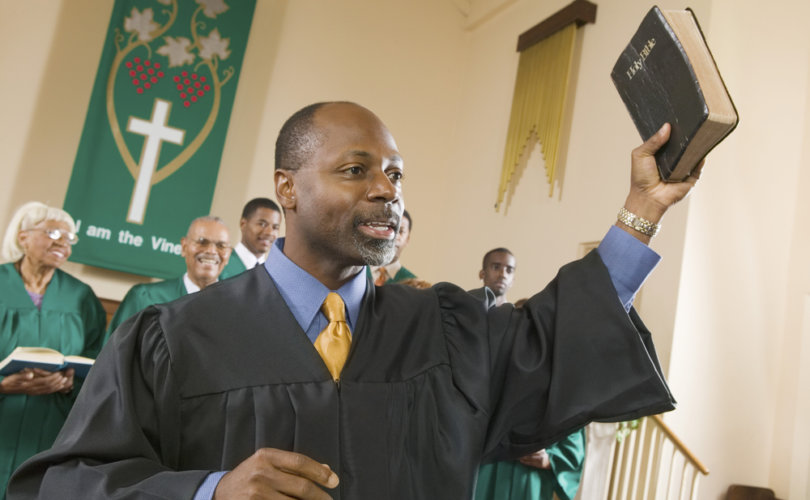 WASHINGTON, D.C., November 3, 2016 (LifeSiteNews) — Some of the nation's leading African-American religious leaders are denouncing Democratic presidential candidate Hillary Clinton, in part because of her involvement in and defense of abortion, which they describe as “black genocide.”

Twenty-six clergy, including eight bishops, signed an open letter to Clinton, castigating her for her extremist and unwavering support of the abortion industry across the nation and worldwide.

The letter addressed several concerns, including education and employment, religious freedom, violence, and “justice for the unborn” in the black community.

Describing biblical teaching as “eternal” and “authoritative,” the concerned leaders inform Clinton that abortion is directly against both “biblical principle and natural law” because it is “the deliberate destruction of a human life in its most vulnerable state.”

Lamenting that “black babies are dying at terrifying rates” by Clinton-supported abortion-on-demand, the bishops and ministers ask the candidate, “Don’t black lives matter?”

“The Bible places an extremely high value on human life and particularly on the lives of the innocent,” the writers explain. The letter then condemns those who, like Clinton, support unrestricted abortion. “Those who take the life of the innocent violate a key biblical principle, as well as a fundamental principle of natural justice.”

The authors seek to educate pro-abortion Clinton that abortion is a social justice issue, tied with racism and other social ills. “For the same reasons that we as black Christian leaders oppose racism … we oppose the violent denial of life to the unborn through abortion,” they wrote. “Our opposition to abortion is a logical outgrowth of our view that there must be justice for all.”

The black leaders then issue a not-so-gentle challenge to Clinton. “How do you justify your unconscionable silence in the face of such destruction of innocent black life?”

The letter addresses other concerns, including the First Amendment freedom of African-Americans to live their faith and “follow their conscience.”

Signers called out Clinton for her words to the National Organization for Women in 2015, demanding that “deep-seated cultural codes, religious beliefs and structural biases have to be changed,” and concluded, “For political leaders to call for changes in citizens’ beliefs is reminiscent of totalitarianism. In our view, such a proposal constitutes a denial of our religious freedom.”

After calling out Clinton for advocating that “religious beliefs … be changed,” the black leaders write that such a stand hurts their flock, which is composed largely of underprivileged minorities.  “Those who would oppose our right to live by the teachings of the Bible set themselves against the interests of the poor,” they explain.

The letter addresses homosexuality as an issue of Christians’ religious freedom and not a civil rights issue for gays. Referring to recent legal and cultural shifts toward same-sex “marriage” and transgenderism as a “drive to normalize immoral sexual behavior,” the letter warns that “a well-financed war is now being waged by the gay and lesbian community … on the faith of our ancestors.”

The letter singles out Clinton staffers' contempt for Catholic Christianity as “one grievous example of open contempt for religious freedom within your own campaign. … (Y)our staff has sought to subvert Catholic teaching on sexuality by planting externally funded groups in the church to advance a politically correct agenda.”

Continuing their concerns about religious freedom, the authors criticize a growing trend in government to label moral exhortation as “hate speech,” and to legislate against it as President Obama did in 2009.

“There are some in your party who seek to criminalize our biblical texts as 'hate speech,'” the letter states, concluding, “We … insist upon having freedom to fulfill our call to righteous living.”

They also criticize Clinton's record as Secretary of State, noting that “80 percent of all acts of religious discrimination in the world are directed against Christians,” and drawing a direct cause-and-effect from Clinton's record to Christian persecution. “Since the beginning of your tenure as Secretary of State, most of the Christians of northern Iraq have been internally displaced or become refugees.”

In defense of their religious freedom, the Christians threaten civil disobedience. “We are prepared, for the sake of the Gospel, to suffer the consequences of standing on our convictions,” they write.

The letter, and other public call-outs against Clinton by African-American leaders, might be having an effect on the election, now less than one week away.

At least one secular black leader, BlakPAC National Director George Farrell, claims that “blacks are finally leaving their Democrat slave masters who care nothing about us other than getting our votes,” and predicts that Clinton rival and pro-life presidential candidate Donald Trump “could get 25 percent of the African-American vote.”

The letter can be read in its entirety here.