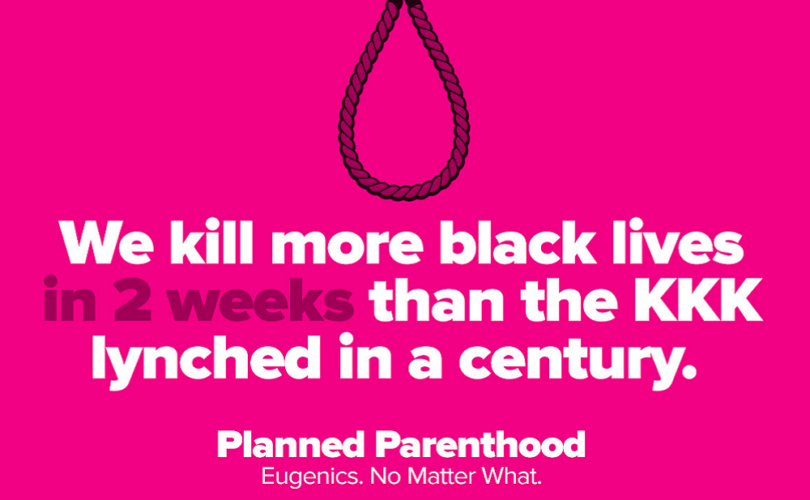 August 25, 2020 (LifeSiteNews) – The reality for blacks working inside the United States’ top pro-abortion pressure groups falls well short of the racial-justice rhetoric they espouse in public, according to “dozens” of current and former employees who spoke to BuzzFeed about the hypocrisy of so-called “white feminism.”

Twenty-six employees of Planned Parenthood affiliates and NARAL’s national office, along with 16 employees of other abortion organizations, claim blacks and other minority staff “were often stuck in lower-paying administrative roles, causing high turnover rates among staff of color and preventing nonwhite employees from rising to positions of power within the organizations,” BuzzFeed reported.

One unidentified woman said it was “insidious” how the organizations pride themselves “on working on issues affecting the most marginalized in society,” but “in their own workplaces, they don’t value those people.” Others allege being disproportionately denied promotions and being “berated and belittled by their bosses while their non-Black colleagues were not,” and witnessing “racial ignorance” and “open racism.”

Another anonymous woman shared her resignation letter from Planned Parenthood of Metropolitan Washington DC (PPMDC), which detailed her experience of being treated differently as the only black member of her team, including being given assistant-level tasks such as food-serving well below her actual administrative position; and being repeatedly screamed at by a supervisor. She also said she witnessed white colleagues regularly describe a black co-worker with terms such as “threatening.”

“I’ve worked at plenty of nonprofits, and I have never been treated so horribly in my life as I was at Planned Parenthood, to the point where I grew very depressed, had a lot of anxiety, and cried in the bathroom almost every day,” she said. At least three other employees of PPMDC reported similar experiences, and even alleged that the office desks were racially segregated.

Insiders also accuse NARAL of ignoring and even retaliating against complaints about “diversity, pay equity, or microaggressions.” They recounted the fallout after complaining about a diversity session at a 2018 company retreat they found lacking. NARAL president Ilyse Hogue gave a “heated” defense of the organization and asked for input on how to improve.

However, after six managers collected and submitted the feedback, one said, “I got a call after hours from my boss and she basically asked me, ‘Why did you guys do this?’” in a way that seemed like a reprimand. “Staff currently at the organization say that a full year after that hire, NARAL has not had a diversity and inclusion training,” BuzzFeed said.

Some of the NARAL insiders who spoke to BuzzFeed also backed up the grievances of Renee Bracey Sherman, a pro-abortion activist who resigned from NARAL’s board in 2017 alleging “racism on the board” and that her perspectives were not taken seriously.

“And then I asked (board chair Brina Milikowsky), ‘Do you think that racism is a problem? Do you think it's a problem that almost no people of color were voted into these seats?’” Sherman recalled at the time. “And she kept avoiding it. So I resigned on the spot.”

Planned Parenthood and NARAL spokesman responded with various statements to BuzzFeed insisting they were committed to racial equity and diversity. But while some of the complaints the report details are firmly rooted in identity politics (such as failure to adopt “trans-inclusive language”), this is not the first time the abortion lobby has been hit with claims of genuine bigotry.

In June, the board of directors for Planned Parenthood Federation of America (PPFA) announced it had fired Planned Parenthood of Greater New York (PPGNY) chief executive Laura McQuade over allegations that she treated workers in a hostile and even racist manner.

Among the allegations against McQuade were that she had a habit of “brutally shaming staff members in internal meetings in front of their colleagues,” that she “lost the 18 million dollar surplus she inherited and replaced it with a 2020 projected deficit of 6.2 million dollars for the first six months,” and that she presided over “unprecedented rates of staff turnover” resulting in a loss of professional experience “so profound as to be detrimental to every aspect of the organization.”

Further, despite the organization’s founding over a century ago (under the name American Birth Control League), Planned Parenthood has only recently begun to reckon with its racist origins, founded by infamous eugenicist Margaret Sanger, who believed “clear(ing) the way for Birth Control” was necessary for the success of “eugenists and others who are laboring for racial betterment.”

Last month, PPGNY announced that it was removing Sanger’s name from its high-volume Bleecker Street abortion center as a “necessary and overdue step to reckon with our legacy and acknowledge Planned Parenthood’s contributions to historical reproductive harm within communities of color.”