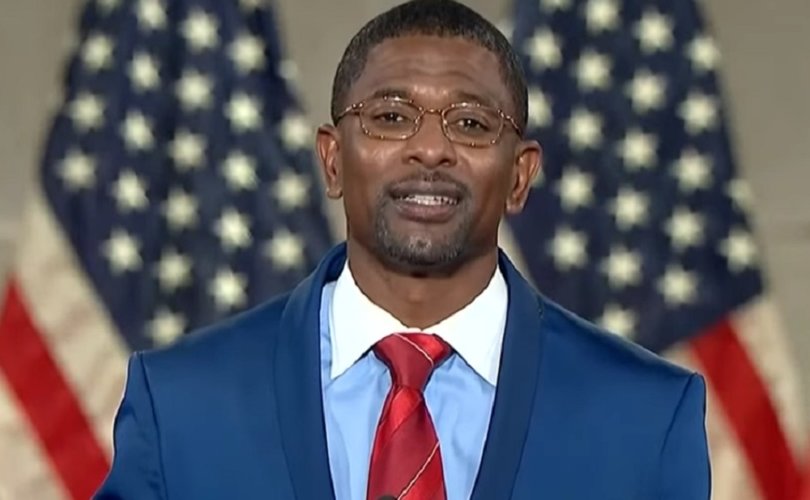 WASHINGTON, D.C., August 27, 2020 (LifeSiteNews) –– A black former NFL player made an impassioned plea to the nation at last night’s Republican National Convention to ignore mainstream media’s relentless negative attacks against President Trump and to vote for him in the upcoming election.

“I remember my dad’s bravery when he personally stood up against a KKK rally in my town. In my house, my father taught me to back down from no one,” he recounted.

“I know what racism looks like. I’ve seen it firsthand in America. It has no resemblance to President Trump,” declared Brewer.

“And I’m fed up with the way he’s portrayed in the media, who refuse to acknowledge what he’s actually done for the black community. It’s confusing the minds of our innocent children,” he said.

Brewer said that before coming to D.C. to speak, his young son, Jackson, stopped him and asked, “Dad, can you please just tell everyone that all lives need to matter, and that God loves everyone?”

“In that moment, I realized that my 8-year-old had figured out what so many adults seem to have forgotten,” said Brewer. “We are not as divided as our politics suggest.”

“This convention marks a time to celebrate our history. Republicans are the party that freed the slaves, and the party that put the first black men and women in Congress. It’s the party of Frederick Douglass and Abraham Lincoln and now, Tim Scott,” said Brewer, referring to the South Carolina senator.

“Our president has made incredible strides to end mass incarceration and give unprecedented opportunities for blacks in America to rise,” Brewer noted.

America, let this election be a call for all God’s people who are called by His Name to humble ourselves and pray together, and to seek His Face, and to turn from our wicked ways. Then He will hear us from heaven, and he will forgive our sins and He will heal our land.