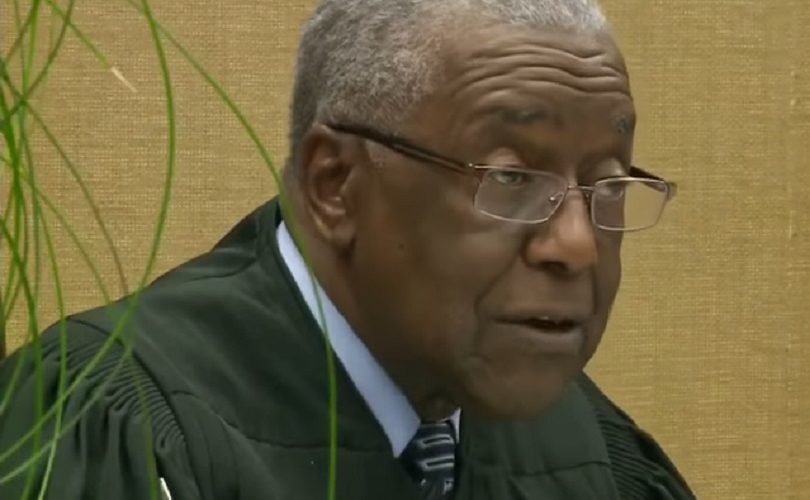 TOLEDO, OH, July 10, 2015 (LifeSiteNews) — A judge in the Toledo area is under fire from homosexual activists after he cited his religious beliefs while refusing to perform a same-sex “marriage”.

“On Monday, July 6, I declined to marry a non-traditional couple during my duties assignment,” McConnell explained in a released statement.  “The declination was based upon my personal and Christian beliefs established over many years.”

Another judge was brought in to perform the “wedding” the same day.

“The court has implemented a process whereby same-sex marriages will be accommodated,” the judge wrote.

McConnell said he would continue to perform traditional marriages.

The court uses a weekly rotation of judges to perform marriages and other unscheduled matters. McConnell was on duty Monday, when two lesbians came in and wanted to be married.

McConnell said he apologized to the lesbians for the 45 minute delay, and that he “wished them the best.”  But it was not good enough for the homosexuals, who complained to the Toledo Blade that the judge “put a damper on the day.”  “You wait so long for this opportunity,” Carolyn Wilson said.  “We didn't think there would be any issue at all.”

Gay activists were quick to call for Judge McConnell to leave the bench.  “They didn't deserve to be inconvenienced,” Nick Komives, executive director for Equality Toledo said.  “We won’t tolerate it. It is his duty to perform this ceremony, and if he's not willing to perform his duties, he needs to step down.”

McConnell has said the civil rights movement inspired him to rise from a coal miner’s son to a lawyer who championed decent housing for all.  The judge has been a leader in Toledo’s NAACP, Urban League, and Legal Aid Society.

On the day the Supreme Court imposed gay “marriage” on all 50 states, officials at the county courthouse in Toledo had to call in an auxiliary minister, because the minister on duty would not marry homosexuals.

First Amendment defenders say there are ways to balance the Supreme Court’s finding of a right to same-sex “marriage” with the Constitutional right to religious freedom.

“The ability of the couple to find someone to solemnize their ceremony in 45 minutes illustrates that there is no substantial government interest in forcing this judge to violate his sincerely held beliefs,”  Caleb Dalton, a lawyer with Alliance Defending Freedom, told The Daily Signal.

“Every American, whether they’re a public official or a private party, should be able to live and work according to their beliefs,” Dalton said.  “Permitting a judge, a clerk, or any other official to refer a public service to another willing public servant doesn’t infringe on anyone’s rights.”

However, Dalton argued, “Forcing people to participate in what they view as an inherently religious ceremony would trample on hundreds of years of Western civilization’s development of freedom and tolerance of diverse views.”

Indeed, a balance was made:  the municipal court’s judges decided to modify a rule for the duties judge.  The court’s presiding judge, or its designated acting one, will have responsibility for marriages, rather than rotating judges.