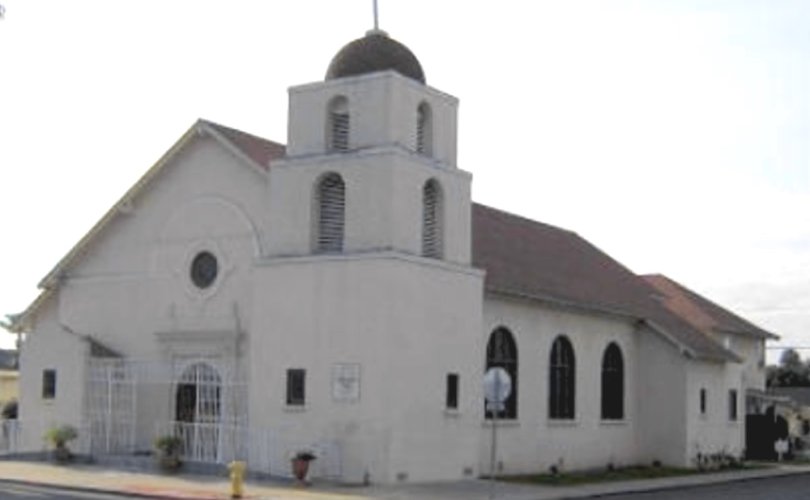 St. Anne Catholic Church in San Diego, California. It is run by the Priestly Fraternity of St. Peter

SAN DIEGO, California, June 25, 2020 (LifeSiteNews) ― A Black Lives Matter activist used social media to call on mobs and rioters to protest a Catholic parish in San Diego, saying that the “white” parishioners did not think black lives mattered and they were “staunch” Trump supporters.

Local Catholics, including the pastor of St. Anne Catholic Church in San Diego’s Logan Heights neighborhood, took the threat seriously and prepared to protect their church after the message began to spread on Twitter yesterday afternoon.

Yesterday a Twitter user calling herself “BLACKLIVESMATTER @bebedeazucarrr” (i.e. “Sugar Baby”) published a photograph of St. Anne Church with words calling for a protest. The image, which appeared to have originally been shared on an Instagram story, had the following message printed on it:

“St. Anne’s doesn’t think Black Lives Matter and are staunch Trump supporters. These are white people who bought out the church from a Mexican family. I would like to see if we can organize a group to protest here ASAP.”

This was followed by the church’s address and the following allegations: “Also they don’t believe coronavirus and have been congregating since the beginning of the Stay @ home orders.”

The Twitter-user seemed to incite residents of the neighborhood by adding her own comment, “Logan Heights!!!!”

When reproached by Catholic Twitter users, the BLM fan denied threatening the church. She claimed she found the image on “a platform” that she follows and that the context of her remark “Logan Heights” was her opposition to its “gentrification.” She has since removed the Tweet.

The pastor and parishioners of St. Anne Catholic Church are concerned that a violent protest could indeed appear outside their place of worship.

Fr. John Lyons, FSSP, told parishioners in an email that the parish administrators had contacted police and said that the police would “intervene if necessary.” He asked that nobody take any other action “on his own initiative,” saying that this would “most likely only make matters worse.”

“We do sincerely encourage you to pray for those who have promoted this action against our parish,” he said.

But several men have pledged over social media to protect the church from the violence and vandalism that in recent weeks has spread from Minneapolis throughout the western world. At first confining themselves to statues of secular heroes, BLM activist have begun to attack images of Christ and Catholic saints.

“I was just informed that a BLM supporter is calling for a protest at our Latin-mass parish in San Diego,” tweeted author Trent Horne.

“I will be following the San Diego Police Department's recommendations for physically protecting the parish but I pray no protest materializes and I hope you will do the same.”

“I am happy to put my body on the line, but I live in San Antonio,” wrote Mike King in response to an appeal by online Catholic talk show host Dr. Taylor Marshall.

“If miscreants show up at St. Anne’s please put the message out on Twitter so I will come,” he continued.

“I have been praying about how we can oppose the desecration and anarchy we have been seeing in the news.”

“Police and faithful are united to protect St. Anne’s,” she wrote. “Sounds like they are talking about having a 24 hours surveillance set up.”

Another St. Anne’s parishioner has organized a “Holy Hour Crusade Novena” for the protection of the church and its priests, the conversion of those who dislike Christ and His Church, and reparation for sins against the Sacred Heart. It will begin at 12:00 a.m. on Friday and continue until midnight on Saturday, July 4.

Some parishioners attested on social media that people from different ethnic backgrounds attend Mass at St. Anne and that it belonged to the Diocese of San Diego before it was given to the priests of the Fraternity of St. Peter to minister. The parish bulletin is published in both English and Spanish. Meanwhile, parishioners also attest that the church has followed the local coronavirus guidelines. The church reopened for public worship on June 8, but currently only 60 people may attend each Mass.

The partisan and race-baiting threat to St. Anne Catholic Church appeared three days after BLM activist Shawn King called for the destruction of statues and other religious art depicting Jesus Christ, His mother Mary and “his white [sic] friends,” saying that they are a “gross form [of] white supremacy.”