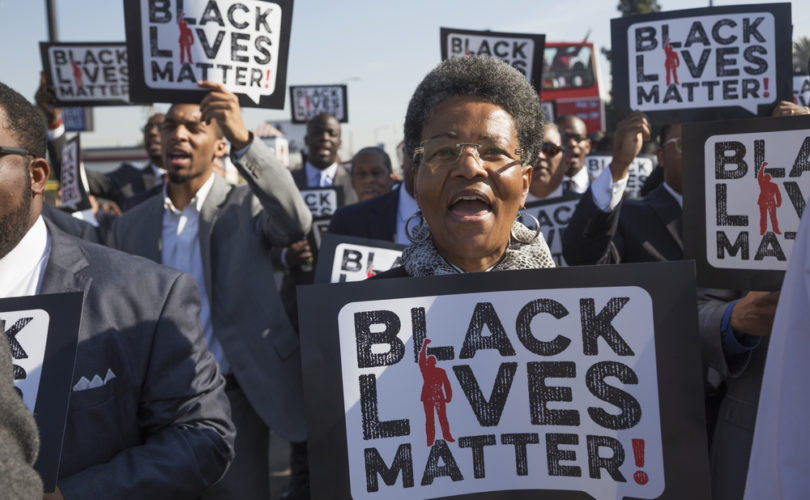 January 20, 2016 (CardinalNewmanSociety) — Opal Tometi and Patrisse Cullors, co-founders of the Black Lives Matter (BLM) movement, spoke at the University of Notre Dame on Monday during a week of events meant to honor the legacy of Dr. Martin Luther King Jr., but the pair used the opportunity to push gender ideology, attack police as a “very big enemy” of their movement and said a “Christian, cis-heteronormative man” like King isn’t needed to lead them “to the Promised Land.”

The event, “Black Lives Matter: The Hashtag Behind the New Civil Rights Movement,” was part of “Walk the Walk” week at Notre Dame, “A series of University and department-sponsored events, community-building dialogues and opportunities of reflection.” University President Father John Jenkins, C.S.C., hoped the week’s events would give the campus community the opportunity to “reflect on the values that are so central both to Dr. King’s legacy and to Notre Dame’s mission.” The BLM event attracted nearly 500 attendees.

Though the women expressed gratitude to Dr. King for his leadership in the civil rights movement, Cullors said their movement needs a new model of group leadership with female involvement. “We don’t need a black, Christian, cis-heteronormative man to take us to the Promised Land,” she added.

Heteronormative describes “the attitude that heterosexuality is the only normal and natural expression of sexuality.” “Cis” is a shortened form of “cisgender,” a word often used when discussing gender identity.

The BLM movement was founded in 2013 in response to the acquittal of George Zimmerman in the shooting death of black teenager Trayvon Martin in Florida. But the movement gained steam last year after the shooting death of Michael Brown during an altercation with police, and the resulting riots in Ferguson, Mo.

“We were seeing our people mourning and taking to the streets and being met with tear gas, being brutalized, for having the audacity to call for attention to what happened,” Tometi said.

According to Cullors, looking forward, the movement will challenge “cisnormativity, heteronormativity, patriarchy” and push a “transfeminist lens.”

“We have intense U.S-centrism and we are obsessed with sort of ‘we built this country,’ right? While we forget about our siblings on the continent, our siblings in Latin America,” Cullors said. “Our principles really uplift black women, cis and trans, to be in this dialogue.”

Cullors noted that black women have always been the leaders of similar movements throughout history, but “history books, schools, institutions erase us or limit our investment in the work.”

One student asked the speakers about the movement’s inclusion of LGBTQ individuals and the mainstream media’s lack of coverage of their involvement.

“I do not believe in prisons, in jails, in police, in court systems, as the way to punish our people, as a way for accountability. I’ve seen how it destroys and decimates individuals, families and whole communities,” Cullors said later. “I believe in community solutions, relying on one another to decide how we’ll respond to harm.”

According to the speakers, their movement is made difficult by the fact that the police are a “very big enemy” that have “a lot of backing.”

The lecture from BLM activists came in the wake of news that the University will again offer the controversial White Privilege Seminar course, which was offered for the first time in the spring of 2015, as The Cardinal Newman Society previously reported. The course is “designed to educate and train White Privilege Conference delegation participants on the definitions of, historical/current paradigm of, and causes/effects of white privilege.”

Students are taught to be “more aware of injustices and better equipped with tools to disrupt personal, institutional, and worldwide systems of oppression.” According to information posted on the website of the White Privilege Conference (WPC) — which students in this course attend at the expense of the University — Christianity is one such system of oppression.

The 2015 conference program defined the term “Christonormativity” as a “system of oppression which assumes Christianity as the norm, favors Christians, and denigrates and stigmatizes anyone that is not Christian” and “equates Americanness with Christianity.” The conference also promoted “LGBT rights” and an understanding of marriage and human sexuality not in accordance with Catholic Church teaching.

Last year, Notre Dame’s independent student newspaper the Irish Rover asked University spokesman Dennis Brown about the University’s funding of the trip to the WPC. At the time, Brown said, “The theory of ‘white privilege’ is a well-established area of academic inquiry within sociology and certainly is a subject worthy of close examination by students who are interested in better understanding race relations.”

Brown did not respond to the Newman Society’s request for comment on the reiteration of this course or on the WPC’s anti-Christian, pro-same-sex marriage themes.

The course is sponsored by the Africana Studies department, and seats are filled through an application process. Currently, three students are registered out of a possible 10 seats, according to the University’s class search program.

Alexandra DeSanctis is a senior at the University of Notre Dame. She serves as executive editor of the Irish Rover. Notre Dame freshman Matt Connell contributed to this report. Reprinted with permission from The Cardinal Newman Society.