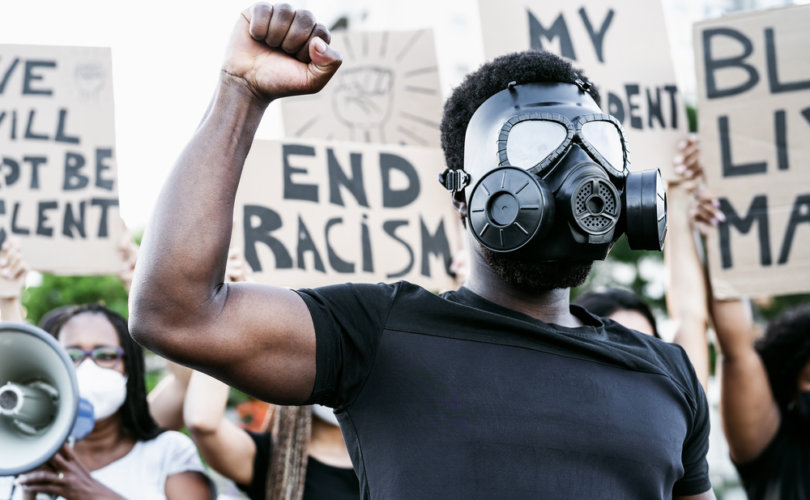 September 22, 2020 (LifeSiteNews) – The key organization of the Black Lives Matter (BLM) movement, officially called Black Lives Matter Global Network Foundation, has removed a section of its website calling for a disruption of “the Western-prescribed nuclear family.”

Instead of a website showing “What We Believe,” the BLM Global Network Foundation now displays an error message, “Page Not Found. Sorry, but the page you were trying to view does not exist.” View an April 5, 2020, archived version of the page here.

Previously, after clicking on “About” at the top of the BLM Global Network Foundation website, displayed a drop-down menu with six options: About Black Lives Matter, What We Believe, Six Years Strong, Herstory, Our Leadership, Our Co-Founders. The source code for the archived versions of the website still shows those options.

However, the current website has removed three options: What We Believe, Our Leadership, Our Co-Founders. All these sections of the website now produce errors.

Originally, the official BLM website had stated, “We disrupt the Western-prescribed nuclear family structure requirement by supporting each other as extended families and ‘villages’ that collectively care for one another, especially our children, to the degree that mothers, parents, and children are comfortable.”

“We foster a queer‐affirming network. When we gather, we do so with the intention of freeing ourselves from the tight grip of heteronormative thinking, or rather, the belief that all in the world are heterosexual (unless s/he or they disclose otherwise),” the “What We Believe” section continued.

“We deserve and thus we demand reproductive justice that gives us autonomy over our bodies and our identities while ensuring that our children and families are supported, safe, and able to thrive.”

The term “reproductive justice” is a euphemism for a woman’s alleged right to an abortion.

While the “About” section of the website doesn’t mention the nuclear family as something the Black Live Matter movement is concerned about, statements in support of homosexuality and transgenderism can still be found.

“We affirm the lives of Black queer and trans folks, disabled folks, undocumented folks, folks with records, women, and all Black lives along the gender spectrum.”

Meanwhile, the original content of what the Black Lives Matter organization believes is already making its way into school curricula.

Fox News host Tucker Carlson last week announced that “this show has obtained a lesson plan from the Buffalo public school system that goes far beyond teaching bad history and deliberately advances the agenda of Black Lives Matter, of a political organization.”

Carlson mentioned the example of one lesson plan that “teaches fourth and fifth graders to question the importance of their parents, of their own mothers and fathers. The lesson plan instructs teachers to discuss various … guiding principles with students, including so-called black villages that assist in the, and we’re quoting now, ‘disruption of western nuclear family dynamics and return to the collective village that takes care of each other.’”

“They’re teaching this to your kids, that your family should be destroyed,” a visibly shocked Carlson summarized. “Why are we allowing this? You know what this is? It’s an all-out war on the most important thing we have, which is the American family.”

“The one thing that could help bring back some of our corroding cities,” he described the family. “Nothing else has worked. We’ve spent over a trillion dollars. It hasn’t worked. That’s demonstrable. Families do work, and anyone who’s emerged from a place like that, of any background or color, can tell you: families are essential.”

“And yet they’re teaching children that families, their families, are the problem,” he continued.

“Now you might think a Marxist organization that destroys private property and wants to place parents is a bad thing, but that’s not what your children are learning. Other lesson plans actually teach students the specifics of the BLM platform which rejects Western family structures.”

“Another lesson plan for grades two through four,” Carlson said, “explains why ‘All Lives Matter’ is a problematic phrase. Yeah, all lives don’t matter. This is insane, and it doesn’t stop in elementary school. The goal is to redefine education at all levels, and turn it into a shell for propaganda.”

Even though the BLM Global Network Foundation wants to “disrupt” the “nuclear family,” all three founders of the Black Lives Movement were raised in intact families.

Patrisse Khan-Cullors, 36, is an LGBT activist who left her married parents’ home at the age of 16 after informing them of her homosexual identity. Alicia Garza, 39, also grew up with both parents at home and is now “married” to a white female who identifies as a “transgender male.” Garza, too, considers herself an LGBT activist. Opal Tometi, 35, grew up with a Nigerian mother and father and two brothers in Arizona.

The BLM Global Network Foundation is a financially strong player in the Black Lives Matter movement. In June, the organization had announced “a fund worth more than $12 million to help organizations fighting institutional racism,” according to a CBS News report.