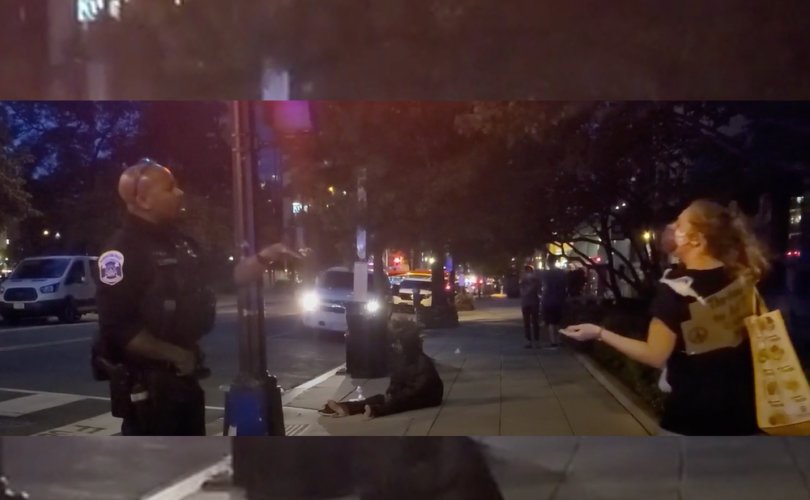 WASHINGTON, D.C., June 29, 2020 (LifeSiteNews) – A black police officer in the nation’s capital has told a white Black Lives Matter protester that sin is at the root of racism. “America has a sin problem,” the officer said. “The world has a sin problem, ma’am. Okay?”

The police officer then proceeded to tell the protester about the message of the Bible. “Jesus said, ‘I am the Way, the Truth, and the Life. No one comes to the Father except through Me,’” he pointed out in a video first published by Breitbart.

“America and the world has a sin problem,” he added. “You understand me? That’s where racism, injustice, and hate and anger and violence come from. It’s not about racism.”

At the end of the video, the officer encouraged the young protester to “read the Bible.”

What the police officer stated in a few short seconds echoes what the Catechism of the Catholic Church teaches about the equality and differences among human beings. “Created in the image of the one God and equally endowed with rational souls, all men have the same nature and the same origin. Redeemed by the sacrifice of Christ, all are called to participate in the same divine beatitude: all therefore enjoy an equal dignity,” according to the Catechism.

Following from the “dignity as persons and the rights that flow from it,” all human beings are created equal, which in turn means that every kind “of social or cultural discrimination in fundamental personal rights on the grounds of sex, race, color, social conditions, language, or religion must be curbed and eradicated as incompatible with God’s design.”

However, this equality regarding the dignity of each person does not mean that all differences between human beings are wrong. “On coming into the world, man is not equipped with everything he needs for developing his bodily and spiritual life. He needs others. Differences appear tied to age, physical abilities, intellectual or moral aptitudes, the benefits derived from social commerce, and the distribution of wealth. The ‘talents’ are not distributed equally.”

“There exist also sinful inequalities,” the Catechism explains, “that affect millions of men and women. These are in open contradiction of the Gospel: Their equal dignity as persons demands that we strive for fairer and more humane conditions. Excessive economic and social disparity between individuals and peoples of the one human race is a source of scandal and militates against social justice, equity, human dignity, as well as social and international peace.”

The bishops in the United States released a pastoral letter against racism in 2018. In it, they repeatedly referred to racism as an evil and a sin.

“Racism arises when—either consciously or unconsciously—a person holds that his or her own race or ethnicity is superior, and therefore judges persons of other races or ethnicities as inferior and unworthy of equal regard,” the bishops explained. “When this conviction or attitude leads individuals or groups to exclude, ridicule, mistreat, or unjustly discriminate against persons on the basis of their race or ethnicity, it is sinful. Racist acts are sinful because they violate justice.”

Racism reveals “a failure to acknowledge the human dignity of the persons offended, to recognize them as the neighbors Christ calls us to love.”

According to the bishops, “often racism comes in the form of the sin of omission, when individuals, communities, and even churches remain silent and fail to act against racial injustice when it is encountered.”

The bishops alleged already in 2018 that systemic racism was present in American society.

They claimed that “the water crisis in Flint, Michigan, resulted from policy decisions that negatively affected the inhabitants, the majority of whom were African Americans.”

However, the bishops did not explain which of the policy decisions, even in the decades leading up to the water crisis, were made precisely because the majority of the inhabitants were African Americans. They simply said, “We could go on, for the instances of discrimination, prejudice, and racism, sadly, are too many.”

In addition, the bishops argued there are “ways that racism has permeated the life of the Church and persists to a degree even today.” In the past, “in many Catholic parishes, people of color were relegated to segregated seating, and required to receive the Holy Eucharist after white parishioners. All too often, leaders of the Church have remained silent about the horrific violence and other racial injustices perpetuated against African Americans and others.”

The bishops concluded their letter by referring to the conversion of St. Paul, which they called “a powerful reminder of how God’s grace can transform even the hardest of hearts.”

Accordingly, “Prayer and working toward conversion must be our first response in the face of evil actions” like racism.

“Therefore, we must never limit our understanding of God’s power to bring about the conversion of even those whose hearts appear completely frozen by the sin of racism,” they added. “Our communities must never cease to invite and encourage them in love to abandon these sinful thoughts and destructive ways.”