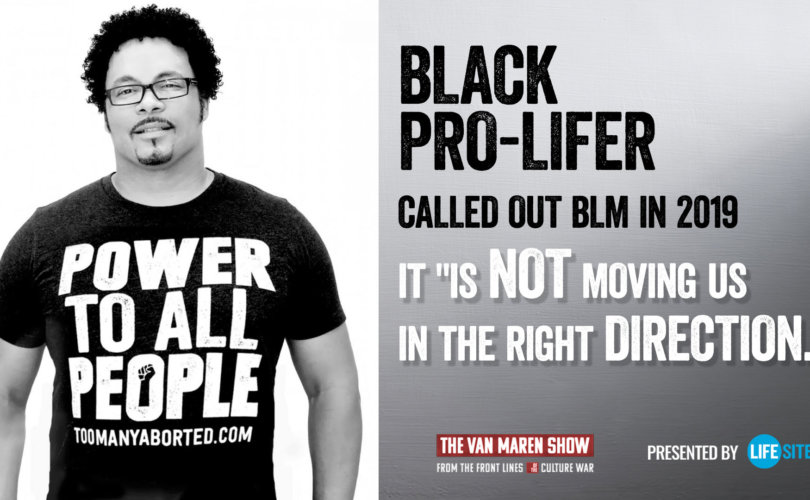 June 24, 2020 (LifeSiteNews) – The Black Lives Matter movement has jumped back into the spotlight with the death of George Floyd and the riots sweeping across the nation; however, the movement, and its problematic beliefs, aren’t anything new.

Ryan Bomberger, a pro-life speaker, author, and co-founder of the Radiance Foundation, spoke with Jonathon Van Maren about the Black Lives Matter movement, abortion and the black community, and the importance of first defending the right to life back in early 2019.

The concerns Bomberger voices about the movement are just as pertinent today as they were a year ago.

Bomberger was adopted into a multi-racial family at a very young age, thanks to his mother choosing life. When he was in 8th grade, Bomberger was introduced to the horrors of abortion for the first time and he immediately knew he was pro-life.

Despite being active in the pro-life community as a volunteer, it wasn’t until he met and married his wife that he realized he was being called to full-time pro-life ministry. With his wife, he founded the Radiance Foundation, an organization committed to educating people about the horrors of abortion.

They run billboard marketing campaigns, do multimedia educational presentations on college campuses, publish articles exposing the truth about abortion, and provide material and financial assistance to mothers and families.

Bomberger highlights the targeting of black women by the abortion industry, beginning with Planned Parenthood’s founder Margaret Sanger. Sanger was very open with her ideas that African-Americans were an inferior race and needed to be sterilized.

Bomberger also cites the fact that in New York City, more black babies are aborted each year than are born. Yet we don’t hear the cries of racial injustice over the loss of those black lives. Instead of standing up to defend unborn black lives, the Black Lives Matter movement supports “reproductive justice.”

He continues, “It is all about segregation.”

Bomberger calls on everyone, including black people, to be “committed to opposing abortion.”

Abortion kills tens of thousands of black Americans every year. Police killings are heartbreaking, as is any loss of life, but the Black Lives Matter movement is not the answer for real change, as Bomberger noted over a year ago.