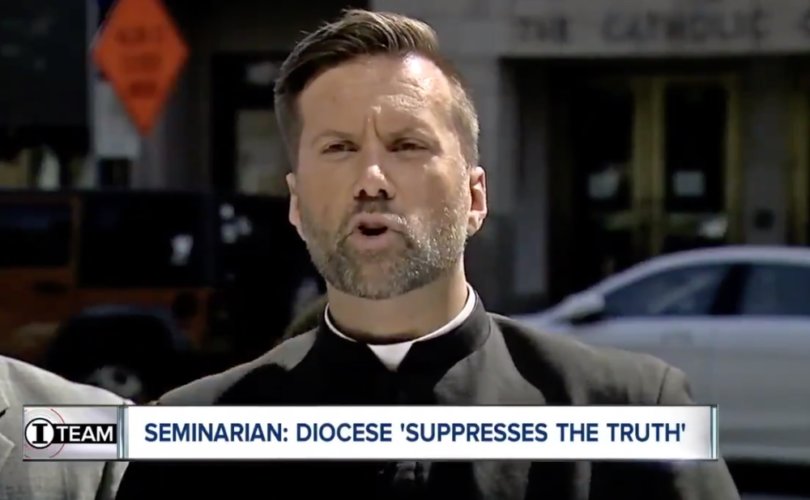 EAST AURORA, New York, August 22, 2019 (LifeSiteNews) ― A second seminarian has left the Buffalo Diocese’s Christ the King seminary alleging negligence on the part of the diocese regarding sexual abuse and harrassment.

Matthew Bojanowski, 38, took part in a public protest outside Buffalo’s Catholic Center this Tuesday while wearing a black cassock and holding a sign reading “Blackmailed by my confessor.” He was accompanied by other protesters, one of whom was Siobhan O’Connor, Bishop Malone’s former secretary.

According to Charlie Sprecht, the Buffalo WKBW Channel 7 reporter who has been shining a spotlight on the Buffalo clerical abuse crisis for months, Bojanowski alleges both that he was sexually harassed by Fr. Jeffrey Nowak of Our Lady Help of Christians Church in Cheektowaga and that Nowak used information obtained from his confession to blackmail him.

Another seminarian in the Diocese of Buffalo has given up his dream of becoming a Catholic priest, blaming alleged sexual harassment by diocesan priest Rev. Jeffrey Nowak and Bishop Richard J. Malone's lack of action when he reported it. https://t.co/kASxBw7hW4 @BishopRJMalone pic.twitter.com/IWSkn8xtI6

The ex-seminarian also says that although Buffalo’s Bishop Richard Malone has known about these allegations for months, he “did nothing” to Nowak until a story about the allegations first appeared in the press two weeks ago. Bojanowski said he had been the subject of slander and “emotional abuse” and accused his former superiors of sabotaging his vocation to the priesthood.

Bojanowski gave the media Facebook messages from Nowak that commented on his looks. One suggested that when he was ordained, he would become “clerical eye candy.”

He has called for Christ the King seminary to be closed and for Bishop Malone to step down.

Bojanowski’s public departure came five days after Br. Stephen Parisi, the Dean of Seminarians of Christ the King Seminary, also announced that he was leaving.

Parisi, who has been a religious brother for 24 years, entered the seminary in January 2018. On August 15, he wrote a six-page open letter to Bishop Malone to explain why he no longer wants to be a priest of the Buffalo Diocese: principally the “disgusting and revolting” way the Diocese has handled the Nowak case and other sexual abuse cases.

“How could I commit my life to representing a diocese that is suspected of being so corrupt that it is being investigated by the federal government under the R.I.C.O. Act?” he wrote.

Parisi also addressed seminarians in his letter, advising them to resist unfair treatment. He accused the Christ the King seminary of forcing students to repeat courses that they have already passed, a practice he called “fraud and academic abuse.”

Parisi said that the most valuable lesson he learned in the seminary was how not to treat people.

He concluded by asking the bishop to resign.

“Bishop Malone, for the love of God, for the sake of the faithful of the Diocese of Buffalo, please step down.”

In a recorded appeal to the laypeople of Buffalo, Parisi told them how they can save their Church.

“Stop putting [money] in the basket,” he said flatly. “That is the only way that the bishop and the Church as a whole is going to pay attention.”

“I think it’s time for the laypeople to regain control and to regain their Church,” he continued.

“It’s up to the laypeople now because … this culture of blackmail and hypocrisy within the clergy and the hierarchy is so deep, is so entrenched, that the only way the Church can survive is for good and honest laypeople to reclaim the Church. And the first step is to stop putting money in the [collection] basket.”

In response to Bojanowski’s allegations, the Diocese of Buffalo stressed that he was not a minor but a man in his thirties during his “interactions” with Fr. Nowak and the Diocese had announced some months ago that Nowak was under investigation. The Diocese also stated that Nowak has denied violating the seal of the confessional.

Regarding Br. Parisi’s resignation from the seminary, the Diocese stated that Bishop Malone has never ignored the allegation that Nowak violated the seal of the confessional.

“To the contrary, Bishop Malone has initiated an investigation of the complaint,” wrote spokeswoman Kathy Spangler. “Father Nowak has been removed from ministry while the investigation continues.”

The Diocese also indicated that they give financial support to seminarians in the form of interest-free loans that are forgiven when the students are ordained.

Fellow whistleblower Siobhan O’Connor published a message on her Facebook page saying that she was proud to stand with Parisi.

“Thank you, Stephen, for your courage and faithfulness,” she wrote.

“Last August, I gave up a job for the truth,” O’Connor continued.

“This August, Stephen’s vocation was sacrificed for the truth. As he puts it, ‘if this is the priesthood being offered to me in the Diocese of Buffalo, I don’t want it.’ Please join me in prayer for Stephen as he adjusts to his new life after taking such a brave but heartbreaking step.”