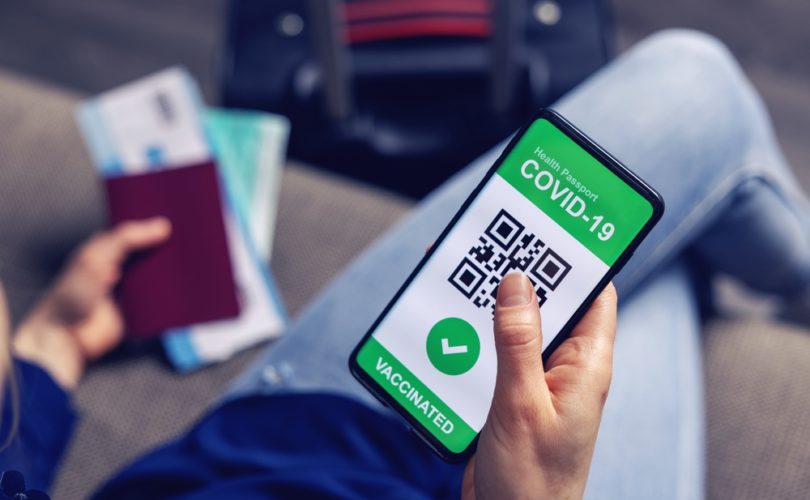 OTTAWA, Ontario (LifeSiteNews) – Prime Minister Justin Trudeau blamed non-COVID-19-jabbed Canadians for a “fourth wave” of the virus while suggesting that vaccine passports and mandates are a type of “motivational” tool.

“There is a fourth wave primarily around the unvaccinated people, unable or unwilling to get vaccinated right now, that is cause for concern, but that is why we are continuing to encourage and to create motivation and accountability and mandates and support passports so that more and more people get vaccinated,” Trudeau said Tuesday while on the campaign trail.

Trudeau blamed Conservative Party of Canada leader Erin O’Toole as well as Bloc Quebecois leader Yves-Francois Blanchet for not “being unequivocal that vaccinations are the way through.”

Trudeau then said that the way “through” the COVID crisis is to “lean heavily and hard on vaccinations” and that he is worried his “seven-year-old can’t get vaccinated.”

Trudeau in August called a federal election for September 20 and has made COVID-19 jabs one of his main public speaking topics.

Talking in Sudbury, Ontario, on Tuesday, Trudeau directly said his government is working on “vaccination passports” with the provinces so that “everyone can be safe.”

He also called out the “anti-vaxxers” as “those people,” and said only the vaccinated will be the ones who get the “privileges” of being allowed to travel by air, train, or boat.

“So the folks out there tonight shouting the anti-vaxxers, they’re wrong. They are wrong about how we get through this pandemic. And more than just being wrong, because everyone’s entitled to their opinions, they are putting at risk their own kids and they’re putting at risk our kids as well. That’s why we’ve been unequivocal. If you want to get on a plane or a train in the coming months, you’re going to have to be fully vaccinated,” Trudeau said.

“Everyone needs to get vaccinated, and those people are putting us all at risk.”

Jay Cameron, litigation director for the Justice Centre for Constitutional Freedoms (JCCF), told LifeSiteNews that leaders who use words like Trudeau’s against those who have chosen to not receive the COVID-19 jabs are “intentionally divisive and manipulative.”

“Angry and emotional rants against people who have chosen not to take the experimental COVID shots are deeply concerning,” Cameron told LifeSiteNews.

“Historically, many master manipulators have attacked an identifiable group of people and insinuated that they are dirty and spreaders of disease in order to stoke public fear and hatred. Political attacks on Canadians who are skeptical about the COVID shots are intentionally divisive and manipulative. Canadians ought to reject these attacks on their neighbours and fellow citizens.”

Cameron added that divisive words against the unvaccinated are “unscientific,” according to some recent studies.

“Canadians have a constitutional right to decide what medical treatments they receive. Millions of Canadians, including doctors, nurses, dentists, professors, are hesitant about getting the COVID shot. Health Canada has placed safety warnings on these injections for myocarditis, pericarditis, thrombosis, and Bell’s Palsy. Canadians have an individual right to weigh the safety and efficacy of these shots for themselves, and it is disturbing that political leaders are attacking them for exercising that right.”

Trudeau recently announced that, starting in October, Canada will mandate COVID-19 jabs as a requirement to travel domestically by air, train, or boat.

Just recently, Trudeau said he will apply what his government “learnt” from the COVID-19 crisis to the “climate crisis” should he be re-elected as Canada’s prime minister on September 20.

Trudeau said recently that if re-elected he would create a $1 billion COVID-19 vaccine passport fund for provinces to access. Manitoba and Quebec have vaccine passports in effect. British Columbia will implement one starting September 13 and Ontario will follow on September 22.