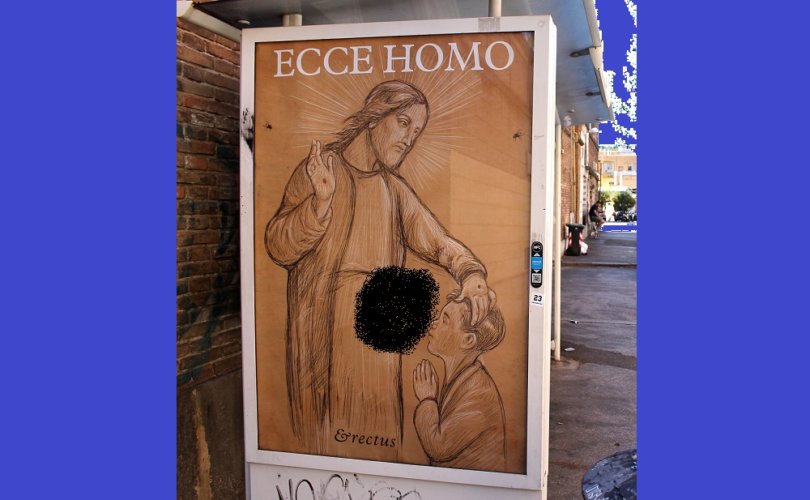 The blasphemous image, which appeared outside Rome's Museum of Modern Art.Public Domain

ROME, December 18, 2019 (LifeSiteNews) — A vile poster depicting Jesus as a sodomite and pedophile has appeared outside Rome’s Museum of Modern Art.

Titled “ECCE HOMO ERECTUS,” the poster leaves little to the imagination. It shows a depiction of Jesus stands before a boy kneeling in prayer, with a hand on the boy’s head. An erection protrudes from beneath the depiction’s garment, right in front of the young boy’s face.

Pontius Pilate uttered the words “Ecce homo,” “Behold the man” (John 19:5), when he presented Jesus to the jeering crowd after Jesus had been flogged and given a crown of thorns. The poster artist, who signs his name “Hogre,” has taken Pilate’s poignant proclamation and added erectus in order to present Christ not as the one who suffered for our sins and carried them to the Cross, but as a sexual being who preys upon boys.

The poster “is an unheard of shame,” said Fabrizio Ghera, a local leader of the Brothers of Italy in a Facebook post.

“This morning, when we went there, we noticed a vulgar image that depicts a child kneeling before Jesus Christ, the latter in a clear state of excitement and with the hand at the head of the [boy],” said Ghera, according to News1.news’s translation. “It is unacceptable that such stuff should be exposed to the public, in an important museum of the city — also with public funds — and also frequented by families.”

Ghera then addressed the mayor of Rome: “As Brothers of Italy we ask the mayor …  urgently [to] remove the blasphemous poster, unworthy and offensive not only to Christians but also to Rome.”

Conservative Italian journalist Giorgia Meloni, who is the national leader of the Brothers of Italy, also made a plea to the mayor of Rome on Facebook: “Mayor Raggi, remove IMMEDIATELY this disgust exhibited at the Museum of Contemporary Art of Rome. I cannot understand how anyone could authorize a massacre of this gravity in a municipal museum of the Eternal City. This shame must disappear immediately and the perpetrators be sanctioned.”

When the same poster was first displayed at bus stops around Rome in June 2017, the artist was arrested and charged with blasphemy and faced a fine of up to 5,000 euros or a prison sentence of up to two years.

At that time, the “ECCE HOMO ERECTUS” poster was placed next to another captioned “Immaculata Conceptio In Vitro,” which shows two women holding a baby between them, meant to promote surrogacy for LGBT couples. The image of the women and child, although less troubling on the surface, is clearly meant to infer a congruence between the Immaculate Conception and surrogacy, although the artist probably actually intended to suggest a parallel between surrogacy and the conception of Jesus in the Virgin’s womb.