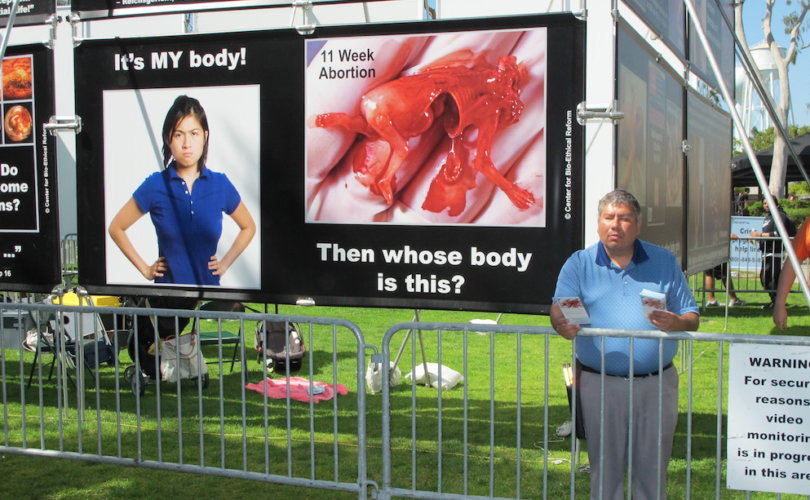 Jose Espinoza joins the Genocide Awareness Project on campus at the California State University, Long Beach.Courtesy of the Center for Bioethical Reform

LONG BEACH, California, March 31, 2016 (LifeSiteNews) – An annual pro-life outreach at California State University, Long Beach drew the anticipated pushback this year, but one pro-life student has a more personal investment than most, and he’s prepared to continue making a difference in defense of life.

Jose Espinoza’s initial involvement in the Genocide Awareness Project at the university got kicked up a notch a few years back after an encounter with a pro-abortion female student who told him to his face she would have aborted him.

Espinoza, who is blind, had asked the young woman her thoughts on aborting a disabled child, and she said she was fine with it.

“That took me back as a person with disabilities,” he told LifeSiteNews. “She told me if I was her child, and she knew I had a disability, she would make the choice to have an abortion.”

“It pretty much blew me away,” he said. “I just told her, how can you just think of aborting your baby just because of having a disability? You don’t know if that baby is going to grow up and be an inspiration for other people with disabilities.”

“I let her know that I didn’t understand why she would say that statement,” he added.

Espinoza is also a non-traditional student in his late 30’s. Born in Mexico in 1979, his family emigrated to the U.S. when he was a year old. The oldest of four, he was born with glaucoma and was essentially nearsighted until completely losing his sight at 17.

He’s still struggling with making friends since he doesn’t live on campus, and it takes some real effort to get around, but it’s not stopped him from becoming involved. Espinoza is active in several religious groups at the University.

“I believe I’m well equipped to meet people where they’re at,” Espinoza said.

It’s also his Catholic faith and God’s plan for him that brought him from simply believing life is precious to being moved to act on it.

“The reason I have this conversion of belief to pro-life is I, as an individual with disabilities, and who practices the Catholic faith, value life,” he said.

Espinoza may be a new student at CSULB, but he’s not new to doing pro-life outreach there.

This was his fifth year volunteering for the Genocide Awareness Project at CSULB after having done so while still studying at Rio Hondo. It was through a newsletter from the University’s Catholic Newman Club that he became familiar with GAP.

The Genocide Awareness Project (GAP) is a mobile exhibit displaying images of aborted fetuses and embryos alongside images of victims of other varied genocides.

Sponsored since 1998 by the Center for Bio-Ethical Reform (CBR), GAP is presented on college campuses by CBR staff and student volunteers. CBR says with public universities seemingly promoting “genocide awareness,” it is completing the discussion by bringing frank conversation of abortion to the table, educating students in the process.

While he hasn’t seen the images, Espinoza is educated on what is contained in each so he can discuss them with students in detail. He’s also aware of their controversial nature, something not at all lost on him.

“They get upset when they come up, they say, “How can you bring these images to campus?” Espinoza recalled. “The reason to display graphic abortion images is because we believe as a pro-life generation and community that groups like Planned Parenthood, they are basically committing genocide.”

“And,” he continued, “they’re targeting African Americans and Latinos.”

Espinoza said he talks to students and tries to make them understand the history of the nation’s largest abortion business and how it’s founder Margaret Sanger was focused on eugenics.

He estimates about 50-60 percent of college students will have reasonable dialogue, and maybe 10-20 percent are “so hardheaded, they refuse to be open about the issue.”

He tries to remind the rest who are on the fence that “the unborn are human beings.”

“What we’re doing by allowing Planned Parenthood to abort these human beings, makes them less of a human being,” Espinoza told LifeSiteNews.

And thus, the pictures convey a necessary truth.

“I try to bring a sense of humanity when it comes to displaying these pictures,” Espinoza explained. “To be honest, yes, these pictures are graphic. But who is going to expose what’s going on behind the doors of Planned Parenthood if we don’t expose these pictures?”

“If someone has a better way to show the truth,” he said, “I would be open to listening to them.”

Espinoza said he always tries to put himself in the other person’s shoes when debating the abortion issue, but ultimately he tells them, there are other options besides abortion.

Even though he didn’t change the feminist’s mind that told him she would have aborted him, he feels the interaction was still good. “I would say I opened her eyes to the fact there are other options.”

And even though he can’t see the images, Espinoza is very affected by what they depict.

“When they (CBR staff members) describe them to me,” he said, “there is sadness that that kind of stuff goes on. It really disappoints me how many young women there are who still don’t understand that life is precious.”

The Genocide Awareness Project took place March 15 and 16 this year on the CSULB campus.

Espinoza said after the first day that it was a good day, and his group had reached a lot of people.

But there was a group of protesters with pro-abortion signs that chanted, “My body – My Choice” at them. The pro-abortion protesters were back the second day, he recalled, but things were more peaceful that day.

“It makes me sad,” said Espinoza. “There is sadness, and some element of anger that in our nation abortion is still legal.”

It’s not a Republican or Democrat issue, he continued, “This is a human issue.”

“I just feel that it doesn’t matter what political affiliation you are,” Espinoza stated. “Human life is very precious and we need to change laws to stop the injustice of these unborn babies being murdered.”

He is confident his generation will see and be the change back toward a respect for the sanctity of human life.

And that confidence comes from his faith, because as Espinoza said, “I’m just doing what my Catholic faith wants me to do.”