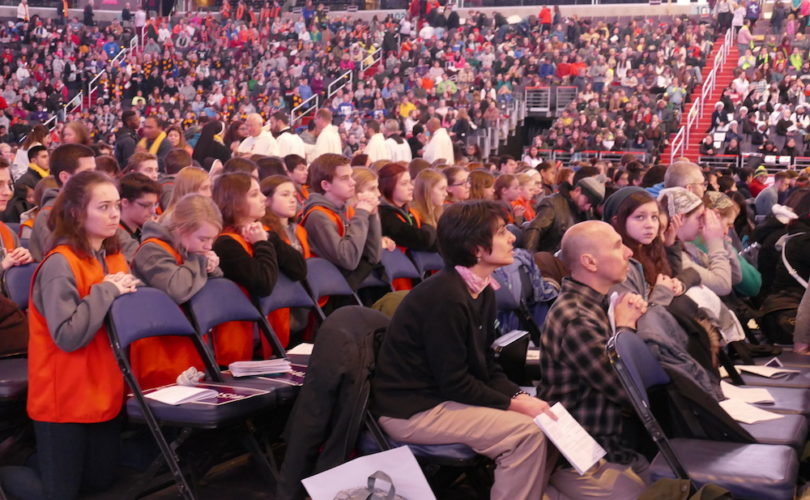 WASHINGTON, DC January 25, 2016 (LifeSiteNews) – In this “throwaway culture” where abortion has “diminished our existence,” young people need to look to “the star that has descended to the earth,” Father Chris Seith exhorted a crowd of about 7,000 enthusiastic participants at Friday’s pre-March youth rally and Mass.

“I bid you to look at Jesus Christ, look at the star that has descended to the earth in the womb of the Blessed Virgin Mary, look to him who enlightens the darkness of this land, who reveals the infinite worth of each and every human life,” said Seith, associate pastor at Our Lady of Mercy in Potomac, Maryland.

“And just as this light enlightened the darkness of this world through the Blessed Virgin Mary, so you too are called to enlighten the world by receiving Christ into your life and sharing that light with the world of shadows.”

Because of the impending blizzard, only 10,000 people of an expected 30,000 took part in the two youth rallies and Masses held simultaneously at the Verizon Center and the DC Armory, with an estimated 7,000 attending at the former and 3,000 at the latter.

But despite the sparse attendance, the mood at the Verizon Center was upbeat and energetic as Oregon-based singer, songwriter and youth leader Steve Angrisano and Nashville-based musician and composer PJ Anderson and his band led a rally before Mass.

Wuerl appeared shortly before Mass to welcome participants, including a group of disabled youngsters sitting in the front row, and young men from the Schola of DC’s Saint John Paul II Seminary.

Homilist Seith urged youngsters not to measure themselves by the standards of an abortion culture. “We base so much of our self-worth on human standards, especially how we look,” he said. “When abortion was legalized, what we said as a culture was we determine the value of human life, we determine when human life is worth living,”

So “the grandma who seemingly has no more use to society or to her family because she’s having dementia, is hidden away from society in an institution, or even now, is being encouraged to end her life because we determine that her value is no more.”

“Or the kid who’s maybe a little socially awkward is shunned in the cafeteria because he doesn’t fit our standards of human perfection, or obviously, the child in the womb that will be an inconvenience because of a human defect, a birth defect,” Seith said. “We think this life no longer has value.”

“What legalized abortion has done to our culture has diminished our existence,” Seith stressed. “We live in a land of shadowy existence, where it’s hard to get excited about life, but in this land that we are about to go back out into, I bid you to look at Jesus Christ.”

The customary protocol of introducing all concelebrating priests and bishops as well as acknowledging organizers was abbreviated because, as Wuerl reiterated at the conclusion of the Mass before wishing everyone safe travels, “There’s a blizzard coming…It’s going to be a very, very, very bad day, weather-wise…but so far it’s been a very good day.”

Cardinal Daniel DiNardo, archbishop of Galveston-Houston, was main celebrant for the Mass held simultaneously at the DC Armory, and Fr. Pawel Sass of Washington’s Our Lady of Peace parish was homilist.