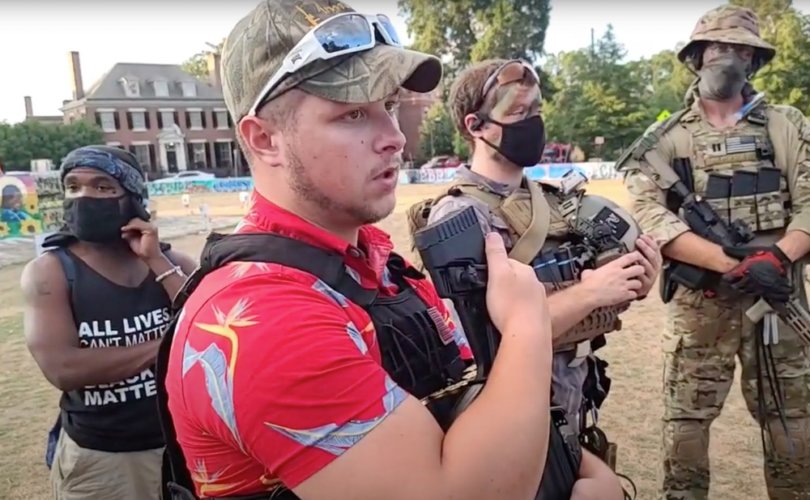 January 19, 2021 (LifeSiteNews) – Dissident group “Boogaloo Bois” (BB) leader Mike Dunn exposed the involvement of his anti-Trump, anti-government, and anti-police political group in the violent events which unfolded in the U.S. Capitol on January 6, saying that “three or four groups of loyalists under his command helped storm the Capitol this week,” in an interview with Reuters.

The Boogaloo group, which is often reported as a right-wing extremist group by mainstream media outlets, aligns itself with hard-left activist group Black Lives Matter as well as anarchist principles of government.

Dunn tweeted on January 6 that his organization were at the heart of the trouble inside the Capitol building, writing that “BB teams have been activated in VA and we currently have 4 fireteams inside capital and 7 more outside.” Dunn closed his tweet by saying “Sic Semper Tyrannis,” a phrase used to incite fear in the ruling class (perceived to be tyrannical) and that a violent fall justly awaits them.

After being asked why the BB would be occupying the Capitol, Dunn responded that “It’s to revel in the breach of security while mocking the defenses that protect tyrants…whether that be Trump or others.” Dunn’s Twitter account has since been removed.

Reuters reported that Dunn has hopes that the BB group can capitalize on the events of January 6 to further its cause. By “working overtime,” the BB will “advance its own agenda by participating at protests and other events.” Dunn added that his group is willing to work “with those angry over Trump’s loss, even if they held other beliefs.”

“Just know there is more to come,” Dunn said in response to being asked if the BB had any plans to advance an attack on the Capitol. Reuters reported that Dunn shared video footage on social media that alleges to show BB agents “tussling with police and forcing their way through barriers outside the [Capitol] building.”

Dunn admitted on Twitter the following day that his group had used MAGA supporters as a sort of cover to get into the Capitol and draw attention away the group itself, admitting that the Trump supporters all left the premises as the D.C. curfew took effect, and bragging that his group continued to break the law all night: “After MAGA and others stormed the capital building in a moment of anger (which was cool)…they retreated to hotels to comply with the Curfew. We obviously didn’t…stayed out in the streets until 12.”

One Twitter user blasted back at Dunn’s tweet, saying that the Trump supporters Dunn claimed to have “stormed the capital building” were actually “infiltrators, not real MAGA.” Dunn swiftly responded: “Yeh we know.”

An archived comment on Parler shows Dunn, in collaboration with “The Last Sons of Liberty,” claiming credit for the breach at the Capitol on January 6. “Boogaloo Bois associated with Last Sons of Liberty, played an important part in the breach of the capital,” Dunn bragged in his statement, before adding that “[a]ny moment to be used to throw a middle finger to Tyranny, should be capitalized on.”

“Yesterday,” he continued, “when presented with that moment, undercover bois went to work to hype up the people.” Dunn explained that, working beside many other groups, “a breach was made into the building which is rightfully ours to walk in as we please, because our taxes paid for it.”

After later being informed about the death of Ashli Babbit, an Air Force veteran of fourteen years who completed four tours of duty during her service, Dunn showed his callous disregard for law enforcement, saying that “feds drew first blood years ago,” and are “fair game now.” Babbit was shot and killed during the course of the Capitol breach, even though she was unarmed.

Dunn’s admission that the BB used MAGA supporters as a decoy to breach the Capitol is just one example of how leftist activists have used Trump’s fanbase as a scapegoat for the events of January 6. Founder of Insurgence USA and known Antifa member John Sullivan used the opportunity to mar Trump supporters as a violent mob whilst himself breaching the Capitol and inciting violent behavior.

Sullivan had been posing as a reporter to gain access to the Capitol and film events from the inside. The footage he captured, however, shows himself agitating the crowd after Babbit was killed: “I’ve been saying, they [the police] murder us like that.” Turning to the officers, he shouted: “You all about to shoot everybody? You all are going to shoot everybody,” trying to stoke an emotional reaction in the furore.

Sullivan was charged with “wilfully and knowingly” engaging in “disorderly or disruptive conduct” at the U.S. Capitol. So far, Dunn has faced no legal ramifications.