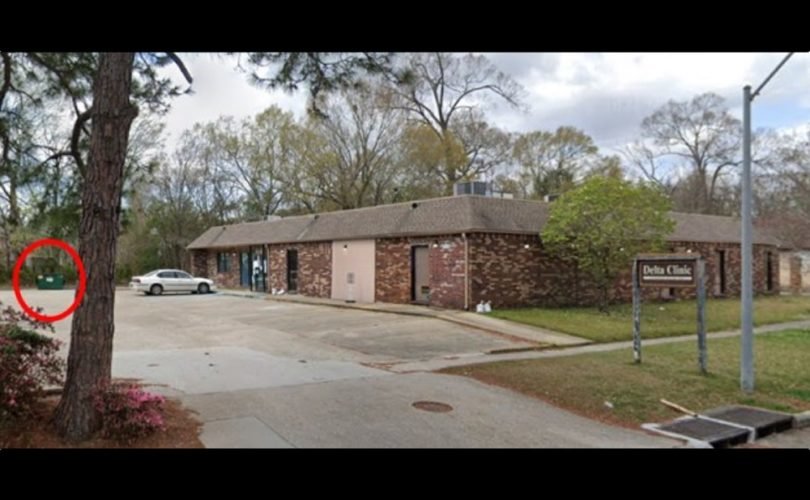 The Delta Clinic of Baton Rouge, with the dumpster (circled) where illegal infectious medical waste was found.

BATON ROUGE, Louisiana, July 13, 2021 (Operation Rescue) – As was his normal routine, a homeless man scrounged the streets of Baton Rouge, Louisiana, on the evening of April 8, 2021, looking for a promising dumpster where he might find some scraps of discarded food for his evening meal.

Lifting the lid on a dumpster behind a business on Colonial Drive, he began to sort through the freshly discarded bags of trash.

But instead of finding stale, discarded food, the bags of trash contained bloody gowns, napkins, plastic tubes, and other items that shocked and sickened him.

The homeless man had stumbled on the dumpster behind the Delta Clinic for Women, one of the busiest abortion facilities in Louisiana.

The next morning, still distraught by what he found, the homeless man reached out to pro-life activists as they arrived outside the Delta Clinic for their daily vigil.

Richard Mahoney accompanied the man to the dumpster, where he photographed some of the discarded medical waste that was heavily contaminated with human blood.  Mahoney also photographed a sign-in sheet from the abortion facility that listed the first and last names of thirteen women who were scheduled for abortion procedures with Delta’s abortionist Nsikan St. Martin on April 6, 2021.

Later, Mahoney was contacted by that same homeless man who had wandered to Shreveport and – out of curiosity – checked the unsecured dumpster at the Hope Medical Group for Women on Kings Highway.  There, he found more bloody trash from abortions, an illegally discarded sharps container filled with used needles, and names of women who had them.

But the homeless man made an even more disturbing discovery.

On the bloody blue bed pads he had pulled from one of several illegally dumped biohazard bags, there were bits of human flesh.

“It is clear that the human remains, bloody biohazard waste and the identities of women who visited the clinics represent criminal violations of medical infectious waste disposal laws and of HIPAA at both the Baton Rouge and Shreveport abortion facilities,” said Operation Rescue’s Troy Newman.

While neither abortion facility will ever receive a “Good Housekeeping” award, the Delta Clinic has a particularly long history of botched abortions and health violations.  And that’s not to mention the sordid histories of the abortion clinic’s owner and some of their abortionists.  There is documentation to show that the Delta Clinic is a disreputable, slovenly, and dangerous abortion business that poses a danger to the public.

Nsikan St. Martin is a case in point.  She was arrested on November 1, 2015, during a domestic dispute with her live-in girlfriend. St. Martin had called police and demanded the other woman be removed from the house. In apparent retaliation, that woman informed the police of St. Martin’s drug possession. According to an arrest record posted online, when the police searched her bathroom, “Officers located suspected marijuana, pills identified as Alprazolam [Xanax] and Mepheylphenidate [Ritalin] and items used to smoke illegal narcotics. Also, several firearms were located in the bedroom.”

If that was not enough, a former patient posted a bombshell review in 2015 on an online medical site soon after St. Martin’s arrest. She indicated that St. Martin worked as a stripper in New Orleans on her weekends off.

St. Martin returned to work at the Delta Clinic in 2018.  A search of her current Louisiana medical license remarkably showed no record of disciplinary action.

The Delta Clinic is a recent repeat offender when it comes to illegally discarding infectious waste, along with other health and safety violations.

On August 3, 2020, after a full day of abortions, a construction company moved in to conduct renovations on the aging building.  Photographs provided to Operation Rescue by Richard Mahoney showed an open cardboard box with bloody contents like that found by the homeless man in the clinic’s dumpster in April 2021.

Mahoney has filed several complaints against the Delta Clinic when violations have been discovered over the years, but little – if anything – has been done to hold the Delta Clinic accountable.  This time, when he lodged his latest complaint, his frustration showed through.

“I am sadly reporting to you again, for the thousandth time, Delta Clinic of Baton Rouge’s newest violation of medical standards and law,” Mahoney wrote to Department of Health’s head of Regulatory Affairs Stephen Russo, and Carol Duchmann of the Louisiana State Board of Medical Examiners (LSBME).

He was notified by the LSBME that his complaint related to the April 8th incident was being processed, but so far, nothing has been done to correct the health hazards created by the Delta Clinic’s staff.

The Delta Clinic of Baton Rouge is owned by Leroy T. Brinkley.  If his name sounds familiar, perhaps it should.

Brinkley once owned two abortion facilities in Delaware that operated under the “Atlantic Women’s Services.”  Brinkley hired a Philadelphia abortionist named Kermit Gosnell, to work part time at his Wilmington abortion facility.  There, Gosnell would begin multi-day late term abortions, then refer those women to his West Philadelphia Women’s Medical Society where their abortions would be completed.

Brinkley had referred one of his former Delta Clinic employees, Eileen O’Neill, to Gosnell for work at his late-term abortion facility in Pennsylvania.  She had been employed as an abortionist at Delta from 1998 to roughly 2000, according to a Philadelphia grand jury report that resulted in the arrest of Gosnell, O’Neill, and seven others after police discovered horrific nature of Gosnell’s abortion business where two women had died and an estimated hundreds of viable late-term babies had been born alive only to be murdered by snipping their spinal cords with surgical scissors as they struggled for life.

O’Neill had told investigators in that case that she had quit her job at the Delta Clinic of Baton Rouge and relinquished her Louisiana medical license due to what she called “post-traumatic stress,” which speaks volumes about her time at Brinkley’s Delta Clinic.

Gosnell was convicted in 2013 of three counts of First-Degree Murder for the “snipping” deaths of three newborns, and hundreds of other abortion-related crimes.  He was sentenced in February 2014, to life in prison without the possibility of parole.  O’Neill appealed her conviction and was granted a new trial, but she reached an agreement that allowed her to avoid time in prison.

Brinkley’s two Delaware abortion facilities were shut down by the State for violations that included unlicensed abortionists, illegal late-term abortions, disappearing medical records, gross health violations, and aiding in the murder of newborns.

Yet, in Baton Rouge, Louisiana, the Delta Clinic continues to conduct business as usual without any apparent consequences for the actions of its staff.

At the Hope Medical Group for Women, things aren’t much better.

“The behavior at these abortion facilities is truly endangering the public health, yet no one in the Department of Health seems to be particularly concerned about it,” said Newman. “Perhaps if they heard from more people who want to see the laws of Louisiana enforced, it might help motivate them to take action. Both abortion facilities need to be shut down.”

Please contact the Louisiana Department of Health’s Stephen Russo and ask that his department investigate the Delta Clinic of Baton Rouge and the Hope Medical Center for Women in Shreveport for illegal dumping of infectious medical waste and other violations.