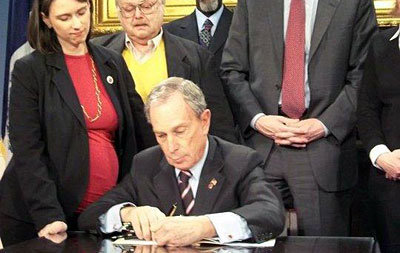 December 20, 2019 (LifeSiteNews) – Former New York Mayor Michael Bloomberg joined the Democrat presidential primary out of a presumption that he would be a more formidable challenger to President Donald Trump than the other candidates. But newly unearthed details about an old lawsuit against the billionaire threaten to further undermine whatever viability he may have had.

The Telegraph reports on the details of a 1997 sex discrimination lawsuit against Bloomberg by former employee Sekiko Sakai Garrison. She alleges that he made a number of disparaging comments about her pregnancy and preborn child, as well as telling her he “would do you in a second” if she looked like another woman he pointed out to her.

Garrison, a former sales executive with Bloomberg’s company, said that when she informed the mayor she was pregnant he disdainfully reacted, “Great! Number 16!” (in reference to his overall number of pregnant employees) and suggested that she “kill it.”

Bloomberg denied making the abortion remarks and settled the suit in 2000, but has acknowledged some inapprporiate comments about women more generally.

“Mike has come to see that some of what he has said is disrespectful and wrong,” Bloomberg spokesman Stu Loeser told the New York Times. “He believes his words have not always aligned with his values and the way he has led his life.”

The allegations place in a new but not entirely surprising light Bloomberg’s doctrinaire left-wing stance on life issues. Planned Parenthood awarded him its Global Citizen Award in 2014 for his pro-abortion record, including investments to decriminalize abortion abroad and enacting a “gag order” against pro-life pregnancy centers in New York City.

Bloomberg currently ranks fifth in RealClearPolitics’ polling average of the 2020 Democrat primary, with five percent of the vote. Despite various struggles, controversies, and gaffes, former Vice President Joe Biden remains the frontrunner at 27.8%.