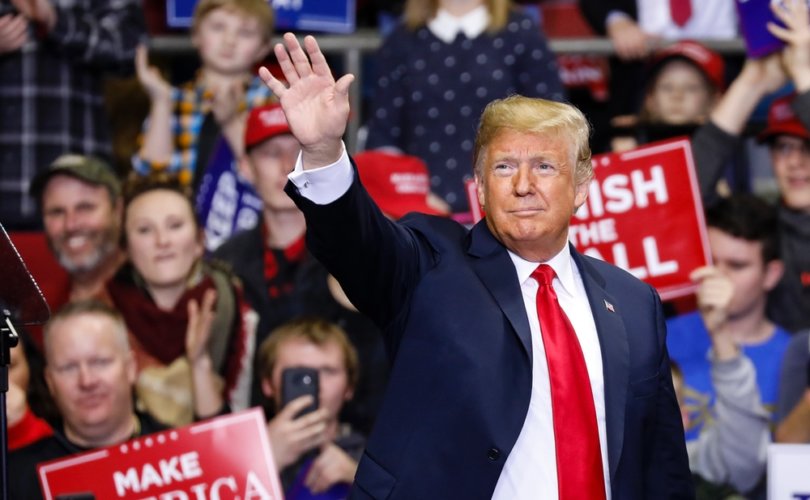 November 6, 2018 (LifeSiteNews) – Republicans expanded their Senate majority while losing control of the House of Representatives Tuesday, limiting President Donald Trump’s options for pursuing a pro-life agenda for the remainder of his first term.

Republicans currently have a two-vote Senate majority and a 235-193 House majority. Nine GOP and 26 Democratic seats were up for election in the Senate, and 91 GOP and 22 Democrat in the House of Representatives. Multiple news organizations have projected the overall results for both chambers of Congress.

At the time of this writing, Fox News reports the GOP has made a net gain of at least three Senate seats and could gain two more, while Democrats are projected to win enough seats to flip the House.

Most of those gains came via executive action, however, and the GOP Congress’ failures to ban late-term abortion, repeal Obamacare, or defund Planned Parenthood have been pro-lifers’ biggest source of frustration. Those bills passed the House only to die in the Senate, where Majority Leader Mitch McConnell has refused to revise rules requiring 60 Senate votes for most bills, and pro-abortion Republicans Susan Collins and Lisa Murkowski had the power to block simple-majority votes.

President Trump and pro-life leaders such as Priests for Life national director Fr. Frank Pavone told pro-lifers that expanding pro-life majorities, particularly in the Senate, were the key to reversing the fortunes of those measures. Tonight’s results all-but ensure the legislative status quo will continue.

Unless House Republicans can pressure enough moderate Democrats to vote with them, pro-life policy gains will again be limited to whatever changes to existing federal rules and regulations can be done by executive orders or directives to federal agencies. It remains to be seen whether two years of only modest reforms will depress enthusiasm for Trump’s re-election, or motivate 2020 voters to deliver him a majority he can work with in a second term.

The House races do not affect the Senate’s ability to confirm pro-life judges and Supreme Court nominees. In fact, the defeats of incumbent Democrats Joe Donnelly, Claire McCaskill, and Heidi Heitkamp may free the president to appoint judges with clearer pro-life credentials, such as William Pryor or Amy Coney Barrett, now that Collins and Murkowski can no longer unilaterally derail a nominee.

A takeover of the House also enables Democrats to try making good on their repeated threats to impeach both Trump and Kavanaugh. Neither could actually be removed from office without a two-thirds Senate vote, but a Democrat House could dominate months of congressional business and news headlines with investigations and proceedings.

House Minority Leader Nancy Pelosi, who may be selected to once again become Speaker of the House, has downplayed talk of impeaching either man, but conservatives have argued those assurances were merely meant to hide Democrats’ true intentions so as not to provoke more Republican voter turnout.

A record number of candidates identifying as “LGBT” ran for office this election cycle, and several of them will soon take office. Jared Polis, who won the Colorado governor’s race, is the first openly homosexual person to be elected governor in the U.S. Sharice Davids, a lesbian Native American and former mixed martial arts fighter, won Kansas’s third district to the joy of homosexual advocacy groups. EMILY’s List, a group dedicated to electing pro-abortion women, supported Davids.

Kansas voted for Trump by 20 points in 2016 and is typically a reliable conservative state. Democrat state legislator Laura Kelly will be that state’s next governor.

Although America now has its first openly gay governor, a candidate who would have been the country’s first openly transgender governor lost. Democrat “Christine” Hallquist, a man who says he is a woman, lost to pro-abortion Republican Phil Scott in the Vermont governor’s race.

Rep. Krysten Sinema of Arizona is running for the U.S. Senate. If elected, the Democrat would be the first openly bisexual U.S. senator. As of 11:16 p.m. EST, her Republican opponent Rep. Martha McSally was maintaining a very narrow lead.

29-year-old Alexandria Ocasio-Cortez, who in the primary ousted longtime incumbent Rep. Joe Crowley, won New York’s 14th district by a landslide. Ocasio-Cortez, now the youngest woman to ever be elected to the U.S. House, is openly socialist and holds extremely left-wing views on abortion and homosexuality. She also wants to abolish U.S. Immigration and Customs Enforcement (ICE). Ocasio-Cortez was criticized during the campaign for, among other things, wearing a $3,500 suit and shoes in a photoshoot with construction workers.

The lone pro-life Democrat in the U.S. House, Illinois’s Rep. Dan Lipinski, was re-elected by a healthy margin.