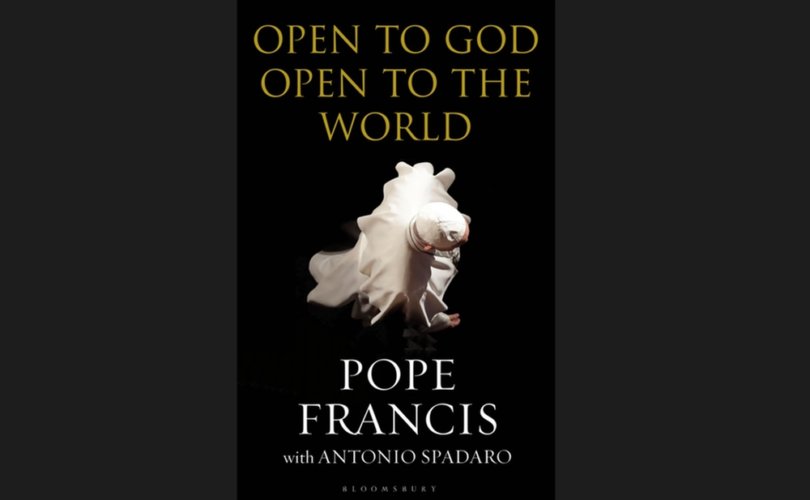 VATICAN CITY, September 6, 2018 (LifeSiteNews) — A blurb on a new book by Pope Francis and close advisor Fr. Antonio Spadaro takes a swipe at Pope Benedict in describing the current pope as a reformer who is “engaged with the poor, the starving and the marginalized.”

“Unlike his predecessor, [Pope Francis] does not sit down in a room in the Vatican and write learned books,” writes the unknown author of the description of Open to God, Open to the World, published by Bloomsbury Continuum in a print edition September 25.

Pope Francis “is in constant dialogue with the outside world and with the universal Catholic Church,” it declares. “He likes being asked questions and finds it easy to respond.”

Given the pope’s silence on allegations he covered up the serial sexual abuse of ex-Cardinal Theodore McCarrick, and famous refusal to answer the dubia, that last line veers unintentionally close to parody.

Consisting of 16 interviews between Spadaro and Pope Francis from 2013 and 2017, in which the two men “engage in valuable dialogue,” the book “reveals a leader’s vision for progress,” the blurb continues.

Known as the pope’s “mouthpiece,” Spadaro, editor-in-chief of the influential Vatican-based Jesuit magazine La Civiltà Cattolica, recently retweeted a call for EWTN to be placed under interdict — a step short of excommunication — “until they get rid of Raymond Arroyo.”

He did so a day after Arroyo and his “papal posse” skewered Spadaro’s Georgetown University lecture on the pope’s “global vision.”

The Kindle edition of the book was released July 26, and its blurb was somewhat more restrained than that of the print edition, which extolls Pope Francis as a revolutionary and reformer.

“His impact on the modern world is extraordinary. He has turned the Catholic Church upside-down, flung open the windows of the Vatican and purged the Augean stables of corruption, simony, nepotism and financial skulduggery,” it asserts.

Meanwhile, citing the crisis in the Church, the highly influential Catholic business association Legatus took the remarkable step of placing its annual tithe to the Holy See in escrow.

“(I)n light of recent revelations and questions, we believe it appropriate to respectfully request clarification regarding the specific use of these funds,” wrote Legatus CEO and founder Tom Monaghan in a September 6 letter.

Notable among those revelations is Archbishop Carlo Vigano’s testimony that the pope and a number of highly ranked churchmen knew of McCarrick’s serial sexual abuse of seminarians, but placed the former archbishop of Washington in positions of influence in the church.

Vigano also alleges in his 11-page document that “homosexual networks” in the Catholic Church function through secrecy and lies to “strangle innocent victims and priestly vocations, and are strangling the entire Church.”

Pope Francis has not responded to the testimony, aside from initial remarks to reporters to look into the matter themselves, and a cryptic homily this week in which he said “silence, prayer” is the best response to “people who don’t have good will.”

However, he is under increasing calls to respond to Vigano’s allegations from the laity, including a letter signed by 37,427 women to date.

At least 27 bishops have called for an investigation of Vigano’s allegations, including the president of the U.S. Conference of Catholic Bishops (USCCB), Cardinal Daniel DiNardo.

“The questions raised deserve answers that are conclusive and based on evidence. Without those answers, innocent men may be tainted by false accusation and the guilty may be left to repeat sins of the past,” DiNardo wrote.

Be that as it may, according to the description of Open to God, Open to the World, the “Franciscan revolution is under way.”

And “in spite of his vehement critics the revolution will roll on and new horizons will be opened for the one and a half billion Catholics in the world today.”