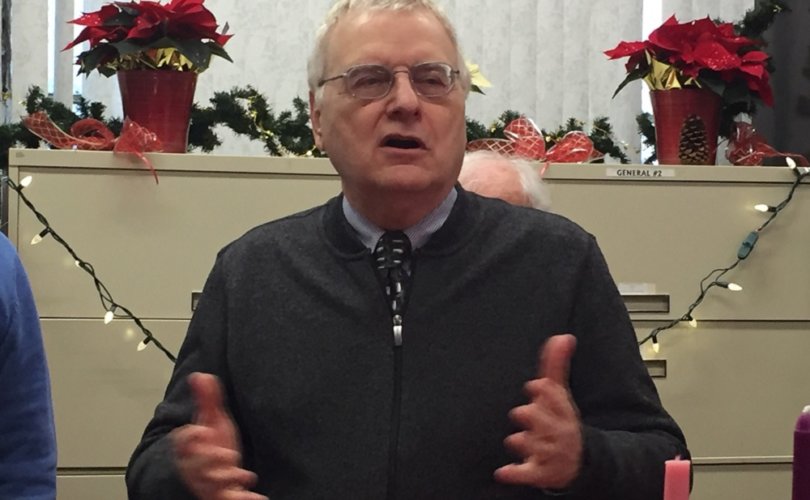 TORONTO, December 9, 2020 (LifeSiteNews) — Embattled trustee Michael Del Grande has appealed the Toronto Catholic District School Board’s November 11 decision to retry him on the code of conduct complaints he was cleared of in the summer, and this time to find him guilty and punish him.

The TCDSB’s decision to reopen the matter and convict Del Grande came after sustained lobbying by LGBTQ activists, who were supported by their allies on the board and the province’s minister of education, Stephen Lecce.

The appeal demands that the TCDSB revoke the finding of guilt against him, reimburse him the costs of the appeal, and “officially apologize” for “its illegal, oppressive and unfair behavior” toward him.

Del Grande has been targeted by LGBTQ activists and their board allies since November 7, 2019, when he tabled a motion opposing the addition of the terms “family and marital status” and “gender expression” and “gender identity” as protected categories under the TCDSB’s code of conduct.

His motion suggested the trustees consider adding other sexually aberrant categories of behavior such as pedophilia and cannibalism as protected categories, in an attempt to illustrate that the Catholic board was on a slippery slope by adding gender terms to the code in contradiction of Catholic teaching.

The motion sparked outrage as well as a number of complaints against Del Grande for allegedly violating the trustee code of conduct.

However, following an external investigation by Michelle Bird of the law firm Rubin Thomlinson, Del Grande was cleared of the charges in August when the pro-LGBTQ trustees failed to reach the two-thirds majority needed for a finding of guilt.

The swing vote was trustee Angela Kennedy, who voted in Del Grande’s favor in August, but voted against him in November.

Kennedy did not respond to a request for comment from LifeSiteNews as to why she changed her vote even though the evidence — the Bird report — had not changed.

Del Grande punished for doing his duty as Catholic trustee

The appeal stated that the TCDSB acted unlawfully, abused procedural due process and natural justice, and further abused process by violating the principles of res judicata — a matter that has been previously decided by a competent body may not be pursued further by the same parties — by reopening the code of conduct complaints in a November 11 special meeting called by trustee de Domenico specifically for that purpose.

“[C]ompelling [Del Grande] to be subjected to an oppressive and vexatious Second Determination violates the fundamental principles of justice that underlie a community’s sense of fair play and decency,” stated the appeal.

It also asserted that the TCDSB violated Del Grande’s Charter rights on a number of grounds, including:

The appeal stated that Del Grande did not violate the trustee code of conduct:

His constitutional rights, his oath of office, his fidelity to Roman Catholic doctrines and teachings, his fiduciary duties, and his statutory duties as an elected official of a [Confederation Act] s. 93 protected school board, required him to be a fearless advocate and to bravely represent his constituents who are faithful to the teachings of the Church, and to boldly proclaim his faith, through his positions in political debate, even if his comments and the manner of speech offended members of the LGBTQ+ community, who continuously exhibit hostility towards him and his authentic Catholic beliefs.

It also asserted that Minister Lecce “bullied” the TCDSB board in an “unlawful intrusion” into the affairs of a Catholic school board, the denominational rights of which are protected under Section 93 of the Confederation Act (1867).

Moreover, Ontario Education Act Section 230(1) prohibits the minister from “interfering with or controlling the denominational aspects of the Board, which is a Roman Catholic board,” and Section 19 of the Ontario Human Rights Code recognizes the preeminence of denominational rights over all other rights.

Lecce gives board ultimatum: “Either you fix this or I will”

Indeed, the appeal reveals the remarkable degree of pressure that the Ford government’s education minister put on the Catholic board.

Del Grande stated in his sworn affidavit that board chair Joe Martino told him days before the meeting that Lecce called Martino with an ultimatum: “Either you fix this or I will.”

He further stated in his affidavit that Martino told him that Deputy Education Minister Nancy Naylor called director Brendan Browne to state that the ministry expected the board to publicly release the confidential Bird report and to reverse its August vote clearing Del Grande.

Del Grande stated in his affidavit that he believed Lecce “would exercise his statutory powers to impose supervision upon the Board unless there was a ‘fixed’ vote to find [Del Grande] in violation of the Code.”

“These actions by the Minister, if accepted by a court of law to be true, constitute unfairness and an abuse of Ministerial discretion designed to influence the Board to illegally abandon its Original Determination and to appease LGBTQ+ political activists who were engaged in a ‘witch hunt’ to silence and harm the Appellant, who stood up to these activists in defence of denominational rights,” it stated.

“The Minister is not above the law, but subject to the legal doctrine known as misfeasance in public office.”

The appeal document castigated Bird’s report as “subjective, shallow, incomplete, rife with unfairness and unfounded assumptions, well below the standard of the reasonable investigation that was needed for this matter.”

It also contended that the Education Act does not permit the board to delegate to an external investigator the responsibility of determining if there has been a breach of the trustee code of conduct, but that this responsibility rests solely with the board.

The appeal further excoriated the board for the sanctions it imposed on Del Grande, which trustee Nancy Crawford denounced at the November 11 meeting as “abominable.”

These were that Del Grande be requested to apologize, that he attend an equity session, and that he be banned for three months from representing the board or holding any leadership position.

The appeal described the punishment as “severe” and as “including disgrace, expulsion, ostracization, banishment, social stigma, forced indoctrination, compelled speech, inability to serve his constituents by being deprived of his right to participate in debates and vote, and the likely future loss of his livelihood as a teacher.”

The latter refers to the fact that after the board found Del Grande guilty of violating the code of conduct, the Ontario College of Teachers reopened an investigation into a complaint brought against him by Kevin Welbes Godin, a former Catholic teacher and now retired Coordinator on Diversity and Inclusion for the LGBTQ activist group Egale.

The appeal noted that as a result of the trustees relitigating an issue and arriving at a different verdict, despite having no new evidence, and apparently because of political pressure, brings the TCDSB “into disrepute” and “fatally” destroys “all semblance of credibility.”

Moreover, the board’s actions legitimately raise the questions: Did the trustees who voted against Del Grande in November “violate their fiduciary duty to their respective Catholic Electors,” and, “Did these same trustees commit misfeasance in public office?”

The board has until December 18 to respond.

To see more of LifeSite’s coverage of Del Grande’s battle with the TCDSB, go here.