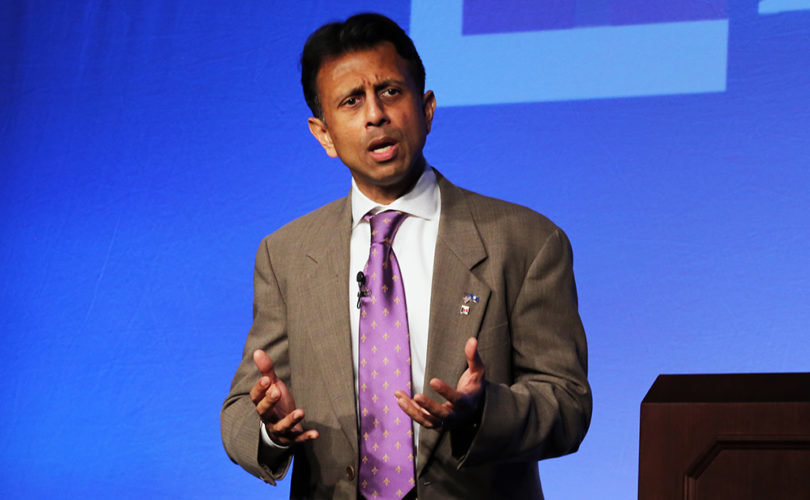 Speaking at a press event after a luncheon sponsored by the American Principles Project (APP) in Washington, D.C., the probable 2016 presidential candidate said that the Republican Party should be forthright about what it believes on all issues.

“I think that as conservatives, we can stand up for everything we believe in,” Jindal said in response to a question by LifeSiteNews about what he would tell potential 2016 presidential candidates to do about social issues like religious liberty and abortion. He also criticized those who say “we need to split up the electorate,” and called the idea that changing one's message to attract different audiences “nonsense.”

“If voters see us being authentic, I think that if they see us standing up for our conservative beliefs, they will vote for us,” said the governor, who criticized those he says want Republicans to be “Democrat-Lite.” He also criticized President Obama and others who believe religious liberty is restricted to freedom to worship, not freedom to practice faith.

Jindal's comments came just days after an interview with LifeSiteNews Editor-in-Chief John-Henry Westen at the Legatus Conference in Naples, Florida. Jindal, who also spoke at that event, told Westen that it took seven years of hearing others’ testimonies before he made the decision to convert to Christianity. He joined the Roman Catholic Church in university.

“People were brave enough to share their faith with me, to plant seeds of the Gospel in my life. I think we're called to share our testimony, share our experience and our faith with others, and hopefully inspire some people out there to go plant some seeds themselves.”

“You never know whose lives you might change,” said Jindal.

“The Founders intended for us to be able to live our lives according to our sincerely held beliefs. Not just in church, 24 hours a day, seven days a week,” he told Westen.

At the APP event, Jindal told Daily Mail Online U.S. political editor David Martosko that he and his wife are “praying” about whether the governor should run for president of the United States later this year.

Louisiana was ranked the nation's number one pro-life state by Americans United for Life in 2014 and 2015. Jindal's APP speech focused on Common Core and education reform — two issues that have dominated his gubernatorial agenda — and his press conference made many references to fiscal conservatism and repealing and replacing the Affordable Care Act.