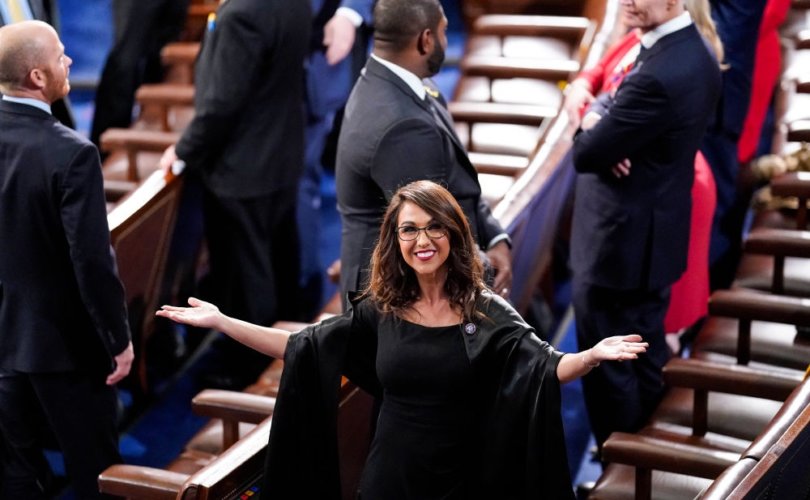 WASHINGTON (LifeSiteNews) — Colorado Republican Rep. Lauren Boebert has introduced a resolution in the House of Representatives to declare a female swimmer who took second-place behind “transgender” swimmer William “Lia” Thomas in an NCAA competition earlier this month the “rightful winner” of the race.

The NCAA had declared University of Pennsylvania fifth-year student William “Lia” Thomas, a 22-year-old man who identifies as a woman, as the winner of the Division 1 Women’s 500 Yard Freestyle competition March 17. Thomas has shattered records and generated national controversy since he began competing on the women’s team after swimming for three seasons on the men’s team.

University of Virginia student Emma Weyant took second place in the competition, finishing 1.75 seconds behind her “transgender” competitor. Weyant is a 20-year-old Olympic silver medalist and native of Florida who swam for the Sarasota Sharks before joining the University of Virginia’s women’s swim team.

In an interview with Fox News Digital, Rep. Boebert said the competition was a “women’s race, and a man improperly took the first place title.”

“When it comes to competitive sports, biology should really triumph [over] ideology,” said Boebert, adding that while she doesn’t know Weyant, she wanted to introduce the resolution because she “truly believe[s] in giving honor where honor is due and Emma is absolutely worthy of honor.”

“Mediocre male athletes who want first place rather than 450th should simply try harder and not pretend to be something that they’re not,” Boebert argued.

‘Her Rankings … Have Bounced From #462 As A Male To #1 As A Female’: 16 Lia Thomas Teammates Sign Letter Asking Penn Not To Sue NCAA, Bar Thomas From Competing https://t.co/AyGDEHaJaj pic.twitter.com/PZgRYx70uD

Fox News Digital noted that “Boebert’s two-page resolution praises the 20-year-old Weyant as a role model and honors her many accomplishments, including her silver medal at the Tokyo Summer Olympics in the 400-meter individual medley.”

According to the resolution, “Emma Weyant’s first place medal was stolen from her by a man competing in women’s swimming,” making Weyant the “rightful winner.”

“Florida rejects the NCAA’s efforts to destroy women’s athletics, disapproves of the NCAA elevating ideology over biology, and takes offense at the NCAA trying to make others complicit in a lie,” DeSantis wrote in his March 22 proclamation.

“[S]ince she is a native Floridian from Sarasota, I Ron DeSantis, Governor of the State of Florida, do hereby declare in Florida that Emma Weyant is the rightful winner of the 2022 NCAA Division 1 Women’s 500 Yard Freestyle, congratulate her on yet another significant achievement, and express pride that she is a Florida resident,” the governor said.

In addition to formal proclamations declaring Weyant the true winner of the competition as the best female swimmer, several athletes and organizations have slammed the NCAA for its policy allowing men to compete against women in professional competitions.

Last week, Virginia Tech swimmer Réka György blasted the organization for allowing Thomas to compete, a policy change which caused her to be bumped out of the top 16 swimmers and therefore not allowed to participate in the finals, in which she could have earned an All America honorable mention.

‘TAKEN FROM ME’: Swimmer who missed out on finals by one spot rips NCAA for allowing transgenders to compete. https://t.co/3Zbmxgng4J pic.twitter.com/XnrehBNfEW

György, a Hungarian-born swimmer who participated in the 2016 Summer Olympics in Rio de Janeiro, ripped the NCAA for its “lack of interest in protecting their athletes.”

“I would like to critique the NCAA rules that allow [Thomas] to compete against us, who are biologically women,” said György, who added that she “respect[s] and fully stand[s] with Lia Thomas,” but hopes “the NCAA will open their eyes and change these rules” allowing men who identify as women to compete against females.

“Every event that [a] transgender athlete competed in was one spot taken away from biological females throughout the meet,” she wrote.

Meanwhile, the feminist organization Women’s Liberation Front (WoLF) also weighed in on the controversy, backing up the female athletes sidelined by their transgender competitor.

“We are deeply disappointed by the NCAA’s promotion and celebration of a male athlete over the wellbeing of female athletes during the past few months,” Mahri Irvine, the executive director of the Women’s Liberation Front (WoLF), said in a statement to the Daily Wire on March 24.

Irvine said her organization is “gravely concerned that the NCAA has chosen to engage in gaslighting of our entire country,” noting that “We all know that Lia Thomas is male, and we all know that the NCAA is engaging in psychological manipulation of athletes, coaches, sports fans, and the general public.”

“We hope that the NCAA will somehow find the courage to admit that it has made serious errors in judgment related to this issue,” she said.