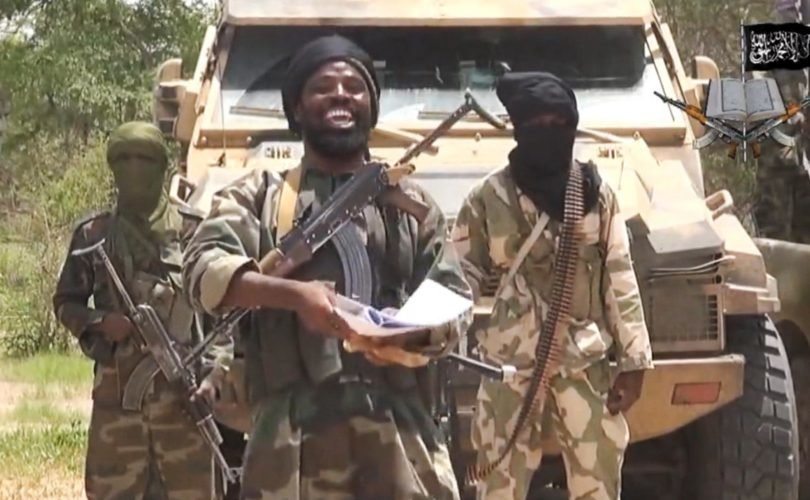 Although the BBC said the recording has “not been verified,” their correspondent Jim Muir called it “well produced” and noted the similarities in style with ISIS propaganda materials.

As part of their propaganda war on social media, ISIS has released another set of photos showing eight bodies hanging by their feet at the entrance to the Iraqi city of Hawija, home to about 450,000 people, where experts say the group has established a stronghold. The Daily Mail reported that the bodies, wearing what appear to be military fatigues, could be those of captured Iraqi soldiers.

In February, ISIS paraded a group of captured Kurdish soldiers, dressed in orange jumpsuits, in cages through Hawija’s streets. These were identified by the ISIS video as “infidels.”

Saturday’s announcement was followed by five more explosions that are reported to have killed more than 50 people and injured about 140 more in the northeastern Nigerian city of Maiduguri.

Meanwhile, workers in Syria with the International St. Vincent de Paul Society have said that ISIS has kidnapped a group of Syrian Catholics associated with the charitable agency. The website of the International Society of St. Vincent de Paul reports that the families were told they must renounce their Christian faith and convert to Islam or face beheading and their children would be “burned alive in cages.”

The Society’s website, Famvin carries a post by a member of the group, Fr. John Freund, a Vincentian priest, reportedly sent to “our curia in Rome” by one of their Syrian associates, “Sister Monique.” The post says that on March 1st, “members of the Society of Saint Vincent de Paul in Syria were kidnapped, along with their wives and children. The children were isolated and put into cages. Adults who do not deny their faith will be decapitated, and their children burned alive in the cages.”

It names St. Vincent de Paul associate “M. Francoise” as asking for help in transmitting the news “and make a fervent appeal for prayers for these people, and all who are held hostage.”

The message was also posted to the American website of the Vincentian order of priests. “Let us remain fervently united in prayer, and have as our intention the welfare of all brothers and sisters in our Christian faith who are being held hostage,” the message continues.

This weekend, ISIS attacked Kurdish militia fighters in and around Christian towns in Syria near Tal Tamr, about 40 km from the Turkish border, weeks after reportedly abducting about between 250 and 375 people.

The UK-based Syrian Observatory for Human Rights reported that, between February 23rd and 25th, hundreds of Assyrian Christians had been abducted by the Islamic State. It is thought that at least 5,000 people – both Muslims and Christians – have fled the area since February.

Reports are conflicting but it is reported that ISIS released between 19 and 25 kidnapping victims in the first week of March. The Observatory issued a statement dated February 28th that said ISIS leaders had ordered 29 to be released, but says that the fate of the rest will be decided by ISIS-run Shari'a courts.

Multiple reports from on the ground in Syria say that the Christian captives, including Chaldean Rite Catholics and Assyrian Christians as well as Eastern Orthodox, are constantly pressured to convert to Islam. One hostage who was later released and who identified himself to news agencies only as “Robert” said, “They kept pressuring us to convert to Islam. It was their constant focus.”

“But we were not mistreated.” Robert continued. “We said we would not convert. They said you must then pay the jizya” – a tax levied in Muslim-conquered lands against non-Muslims – “or leave the country. That was the option given to us.”

“We said we would pay the jizya, but we would not convert,” he said.

The news of Boko Haram’s announcement follows last month's speculation by the Nigerian Bishop Emmanuel Badejo of Oyo that Boko Haram’s successes have been at least in part due to the reluctance of the U.S. to act.

Bishop Badejo said the Obama administration is annoyed by Nigeria’s refusal to accept homosexuality and the West's population control agenda.

“The United States actually said it would help Nigeria with Boko Haram only if we modify our laws concerning homosexuality, family planning, and birth control,” Badejo alleged.

The bishop, who is from the south of Nigeria, said at the time that he did not know whether Boko Haram was reaching out to ISIS in its efforts to create a transnational Islamic “Caliphate.” But he said that said Boko Haram “has been strengthened by other groups coming from the north of Africa and beyond, like those who fought in Libya and who have been fighting in Syria.”

Experts continue to note the strong similarities in the style of presentation of Boko Haram and ISIS propaganda videos. In January the Nigerian group issued a video of a beheading of two men that the BBC said was heavily influenced by ISIS propaganda. “The staging, slow motion techniques, and sound effects made the film look more like an [Islamic State] production than a traditional Boko Haram video.”

American analysts have said that in practice this means that Boko Haram and ISIS are “trying to synchronize their activities” with the goal of ultimately creating a new “Caliphate,” or transnational Islamic state. Others are saying that the allegiance is more for purposes of propaganda than any real coordination of the two group’s ambitions.

The announcement came in the wake of attacks on Boko Haram’s territory in northern Nigeria by a multi-national military force. Nigeria’s neighbors, Chad and Niger, also threatened by Boko Haram incursions within their borders, have joined with Nigerian military forces to aid in pushing the group back.

Since late 2014 the Nigerian government has proven unable to turn back the advances of the group, mainly due to corruption in government and military leadership. The U.S. State Department has determined that Boko Haram currently controls at least 20 percent of the country’s territory, has spread over the borders of Chad and Niger, and is carrying out raids on towns and villages and attacking military bases in Cameroon.