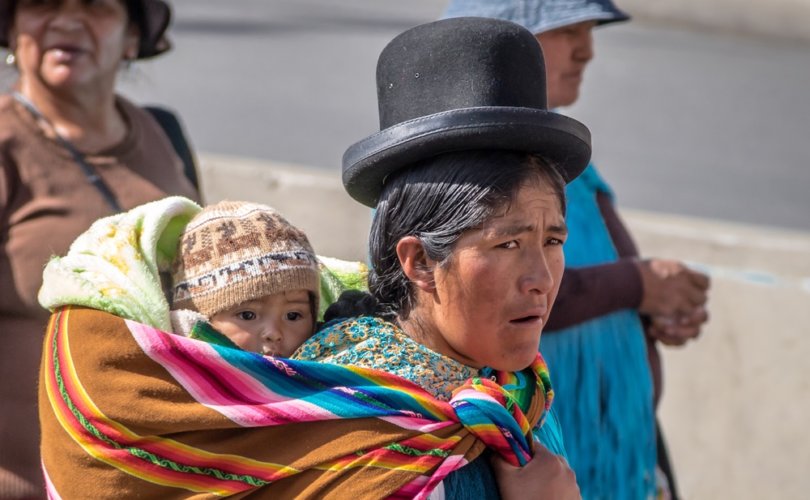 A traditionally-dressed woman (Cholita) with a baby on her back during the May, 2016 Labor Day Parade in La Paz, Bolivia.Shutterstock.com

SUCRE, Bolivia, December 8, 2017 (LifeSiteNews) — The South American country of Bolivia, traditionally Catholic and pro-life, has voted to lift restrictions on abortion to allow teenage mothers to kill their preborn children.

While no age restriction on pregnant mothers wanting an abortion has been specified, it is believed the new law is designed for teenage girls. “Students” apparently means adult single women who are supported by their parents.

President Evo Morales said he would sign the bill into law.

Catholics demonstrated against the legislation before the vote outside the Basilica of Our Lady of Peace in La Paz and elsewhere throughout the country.  Evangelical Christians also organized protests.

The pro-lifers chanted, prayed, and held signs. Some signs said, “A pregnant woman needs support not abortion,” and others, “Abortion is the greatest violence against women.”

Previous to the vote, abortion was only allowed in cases of rape, incest, or to save the mother’s life.

Bolivian Health Minister Ariana Campero favored the measure because, she said, “clandestine” abortions “are not safe.”

One Catholic protest sign responded to Campero, “Clandestine or legal, abortion kills all the same.”

Feminists said they will not be satisfied until abortion-on-demand throughout pregnancy is completely unrestricted. “Our demand is decriminalization!” Coordinator of Women Director Monica Novillo said.

South American and Central American countries have been under increased pressure to legalize abortion.  In August, Chilean politicians broke with decades of pro-life tradition to legalize abortion in cases of diagnosed possible disability, rape, and whenever “the fetus is unviable.”  A Chilean Constitutional court supported the law 6-4.  El Salvador, Nicaragua, Honduras and the Dominican Republic are still consistently pro-life.