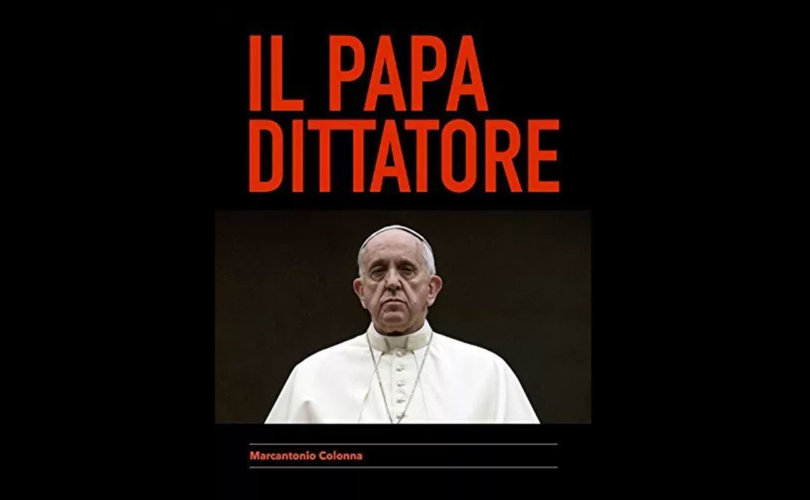 December 6, 2017 (LifeSiteNews) – An explosive new book is claiming not only that Pope Francis is a power-hungry, manipulative dictator, but that he celebrated the abdication of Benedict XVI.

The Dictator Pope, by a pseudonymous author who calls himself Marcantonio Colonna, claims to describe what Pope Francis is like when his adoring public isn’t looking: “arrogant, dismissive of people, prodigal of bad language and notorious for furious outbursts of temper which are known to everyone from the cardinals to the chauffeurs.”

Despite the hidden identity of the author, the book has hit the bestseller list and received praise from seasoned Vatican watchers.

According to the book, Francis is a master manipulator, and was fully conscious of both attempts to have him elected pope. When the 2005 Conclave elected Cardinal Ratzinger instead, the formerly conservative Cardinal Bergoglio adopted a newly progressive stance in line with the theology of his backers. And it seems that he was privy to the resurrection of their plans when Benedict cut his own papacy short. According to Colonna:

“By the middle of 2012, a few insiders in the Curia knew that Pope Benedict was considering abdication; he had confided his intention to two of his closest associates, the Secretary of State Cardinal Bertone, and the papal secretary Archbishop Ganswein, and he had named the exact date: 28 February 2013.

“Cardinal Bergoglio’s communications with Rome were abruptly stepped up from this time, rising to hectic levels as the date approached. Sure enough, on 11 February 2013 Pope Benedict made his public announcement to the cardinals, and it took almost the whole world by surprise; not Bergoglio and his associates, however, as eyewitnesses discovered.

“On the day of the announcement itself, the rector of Buenos Aires cathedral went to visit his Cardinal and found him exultant. During their interview, the telephone never stopped ringing with international calls from Bergoglio’s allies, and they were all calls of personal congratulation. One Argentinian friend, however, less well informed than the others, rang up to ask about the extraordinary news, and Bergoglio told him:’You don’t know what this means’.”

Renowned Italian journalist and Vatican expert Marco Tosatti who writes for the Italian daily La Stampa, called The Dictator Pope  “important” and  “a panoramic view” of the historic events of the Bergoglian papacy so far. Robert Royal, editor-in-chief of The Catholic Thing and papal watcher for EWTN, characterises The Dictator Pope as “far more probing and detailed than anything that has previously appeared” about Francis’ papacy.

Royal cautions that the book “sometimes stretches evidence,” but adds “the sheer amount of evidence it provides is stunning. About 90 percent of it is simply incontrovertible, and cannot help but clarify who Francis is and what he’s about.”

The United Kingdom’s most popular Catholic weekly comments that The Dictator Pope is “at times harsh,” but praises it saying it “draws on a wide range of material including confidential sources within the Vatican.”

The online book was made available in English on December 4. An insider’s view, it also delves into published articles and books about Francis–some of which have disappeared from Argentine bookstores–to explain the shadow side of the Bergoglio pontificate.

The “scheming Jorge Bergoglio” presented by The Dictator Pope is a startling contrast to the “humble Pope Francis” sold to the public from the date of his election by the world media. What effect the first will have on the second will be interesting to discover.

Pope Francis has critics of ‘substance’ who ‘can’t in justice be dismissed’: US archbishop

Cardinal ‘evolved beyond’ stating right and wrong, thanks to Pope Francis: commentator