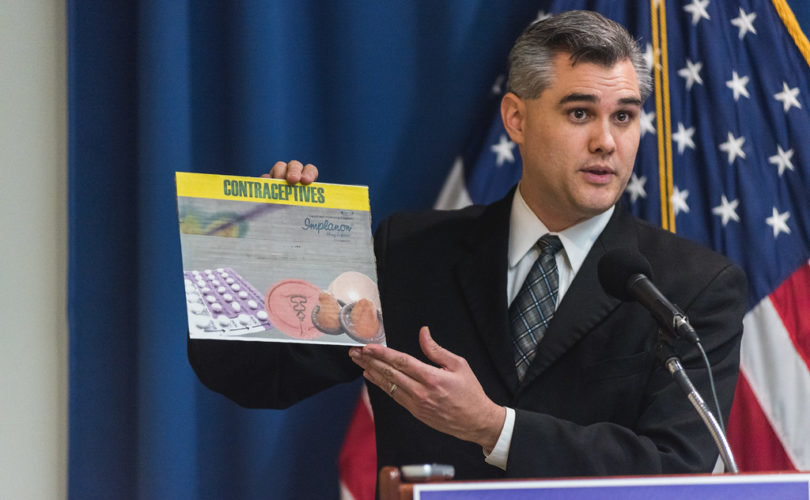 WASHINGTON, D.C., December 18, 2017 (LifeSiteNews) – A pro-life research organization has claimed that the US Bishops’ anti-poverty office offered it grant money to dissuade it from investigating the office’s problematic grants to other groups.

Michael Hichborn of the Lepanto Institute revealed that the US bishops’ Catholic Campaign for Human Development (CCHD) offered him grant money in 2011 to create a group to fight “pro-abortion and anti-family movements” during a meeting where problematic grants the organization made were supposed to be discussed.

“What I did not expect was to be told that instead of meeting and discussing our research into CCHD grants, the CCHD would rather provide us with a grant to create a group that would organize low-income people against the pro-abortion and anti-family movements,” said Hichborn in a press release.

Hichborn said he went public with the information in response to the CCHD’s Executive Director Ralph McCloud having sent a recent email to supporters in which he said that the CCHD had met with the Lepanto Institute to address concerns, but “with no positive results.”

“Since McCloud decided to claim in this email that his meetings with [the Lepanto Institute] had no ‘positive results,’ it’s important to put this claim into context,” said Hichborn before going on to giving details about the 2011 meeting.

When Hichborn and a colleague met in the fall of 2011 with John Carr — then director of the USCCB’s Department of Justice, Peace and Human Development — and Ralph McCloud — director for the USCCB’s Catholic Campaign for Human Development (CCHD), Hichborn and his associate intended to present a report on CCHD grantees implicated in activity contrary to Catholic teaching – including distributing condoms and promotion of abortion and homosexuality.

Instead, before Hichborn and his associate could address the report, they were told the CCHD would rather provide them with a grant to create a group that would organize low-income people against the pro-abortion and anti-family movements.

“CCHD leadership was willing to offer a grant in the hopes that my reports would cease to be made public,” Hichborn told LifeSiteNews, “showing the depth of corruption this organization is mired in.”

“Several times throughout the conversation, we were presented with an “appeal” to take a grant from the CCHD in lieu of the research we were conducting into CCHD grantees,” he said.

“This was something proposed to us before we even got to talking about the grantee report we came to discuss,” Hichborn said. “At first, it was made as a suggestion that it would be great if we coordinated low-income people to fight against pro-abortion, anti-life forces because CCHD would like to fund something like that. This suggestion was followed by an admission that they were breaking their own rules by soliciting people to create a group that CCHD would then fund.”

Carr left the USCCB in 2012. McCloud remains CCHD director. At the time of the meeting Hichborn – currently president of the Lepanto Institute – was with the American Life League.

LifeSiteNews inquired with the USCCB and McCloud on Hichborn’s report of a grant offer in the meeting with Carr and McCloud, and did not hear back. The inquiry was also forwarded to offices of USCCB President Cardinal Daniel DiNardo, vice-president Archbishop Jose Gomez and CCHD Subcommittee Chair Alexandria Bishop David Talley.

In addition to Carr and McCloud saying in the meeting that they were “violating their own rules” by offering to provide a grant to create an organization combating anti-life forces, Hichborn recounted, the two USCCB execs also said that the CCHD’s definition of “low income” was more expansive than it was in the past.

“The suggestion was simply that we could pay ourselves fairly well and still qualify for the grant,” said Hichborn. “Amazingly, after offering us a grant and telling us that doing so was a violation of their rules, they went on to specify that they weren’t supposed to solicit grant applications and help people through the grant process. But this is precisely what they were offering to do. And it was done specifically in the context of moving us away from the ongoing investigations we were conducting into CCHD grantees.”

Hichborn said he was amused at first at what was being discussed.

“I went there to talk about a 212-page report we had put together on CCHD grantees,” he said, “and the first thing we were met with was a proposal to receive a grant from the CCHD. It felt like something out of a movie … it was surreal.”

He said once they clarified that the report on problematic CCHD grantees would be released, the conversation with Carr and McCloud took a different turn – changing from an offer to a threat.

“But after I made it clear that I still intended to publish the report we came to discuss, the proposed grant became more clearly stated as an if-then scenario,” he told LifeSiteNews. “In other words, what was communicated to us was that IF we formed a group like the one I just described, CCHD would fund it, but IF we published the report we had in our hands, CCHD would characterize it as an attack and work to discredit it.”

“In fact,” he said, “we were specifically told what a shame it is that the CCHD would be forced to waste time discrediting our report instead of providing us with a grant.”

“We made it clear that the reason for publishing was simply this: we believed that pew-sitting Catholics deserved to know what sort of organizations the CCHD was funding so they could determine on their own if this was the sort of thing they wanted to contribute to,” he said.

After the Lepanto Institute’s recent report on the current crop of CCHD grantees was released, showing continued conflicts with Catholic teaching, McCloud sent out an email on the allegations.

And given that McCloud told his email audience that CCHD staff had met with Hichborn “with no positive results,” and that the CCHD Subcommittee had asked that he not meet with Hichborn “since there seems to be no amicable resolution,” Hichborn felt compelled to act.

In addition to the “no positive results” characterization, Hichborn pointed an issue out pertaining to the claim of why CCHD had ceased meeting with him.

Hichborn had met with the CCHD several times beginning in 2010 prior to this 2011 meeting with Carr and McCloud.

Despite the failed effort to attract Hichborn and his colleague into a financial relationship in 2011, and although the report on CCHD grantees was subsequently published, CCHD continued to meet with them.

However, then in the fall of 2012, McCloud unexpectedly canceled the last scheduled meeting just two days before the appointed time.

Though McCloud claimed in the email that the meetings stopped because “there seems to be no amicable resolution,” Hichborn said it is far more likely that the meetings were ended because Hichborn had sent in proof that the CCHD’s largest network of grantees lied to McCloud and sent falsified information to him.

The Gamaliel Foundation is one of the CCHD's largest and longest-running networks of organizations receiving CCHD grants.

In the summer of 2012, Hichborn gave evidence to the CCHD that the Gamaliel Foundation was a member of an organization with official positions in favor of homosexuality.

The CCHD contacted Gamaliel to inquire about the membership, and Gamaliel responded by saying it ended its relationship with the organization in question in May of 2010.

To prove this, Gamaliel sent the CCHD a copy of a letter it purportedly wrote to the organization that month terminating their relationship. Hichborn later discovered document files on Gamaliel’s website indicating it was a member of this organization throughout 2011, and into 2012.

Thus, he said, Gamaliel lied directly to the CCHD and provided them with a falsified document.

Then, seven days after Hichborn sent proof of Gamaliel’s deception to the CCHD, McCloud canceled the appointed meeting with a single-line email stating, “We see no reason to meet at this time.”

“More to the point,” said Hichborn, “the alleged “amicable resolution” would have required the CCHD to disqualify its favorite grantee network from all funding.”

“But instead of taking any action against Gamaliel, McCloud closed off communication with me and got to work at discrediting my reports,” he told LifeSiteNews. “In other words, CCHD chose to defend a lie and attack the truth.”

“Whenever we brought up the fact that we thought pew-sitting Catholics were owed this information,” Hichborn said, “McCloud was quick to say that our report, while factual, was written in such a way as to condemn the grantees without pointing out their good points.”

Precedence of the temporal over the spiritual is a misrepresentation of the Church’s mission, he said.

“The so-called gospel of social justice is a lie rooted in liberation theology, which is also a lie,” stated Hichborn. “The sole purpose of the Catholic Church is the salvation of souls through the sacraments, not community organizing for political agitation.”

“If Our Lord's mission was about social justice, He would have organized Barabbas and others to begin picketing Pontius Pilate for religious rights and personal freedoms,” he continued.” Rather, He called His disciples out of their lives of sin and taught them how to follow Him to salvation.”

“Unless faithful Catholics write and call their bishops about this,” Hichborn concluded, “demanding direct and specific answers, it will only be business as usual.”