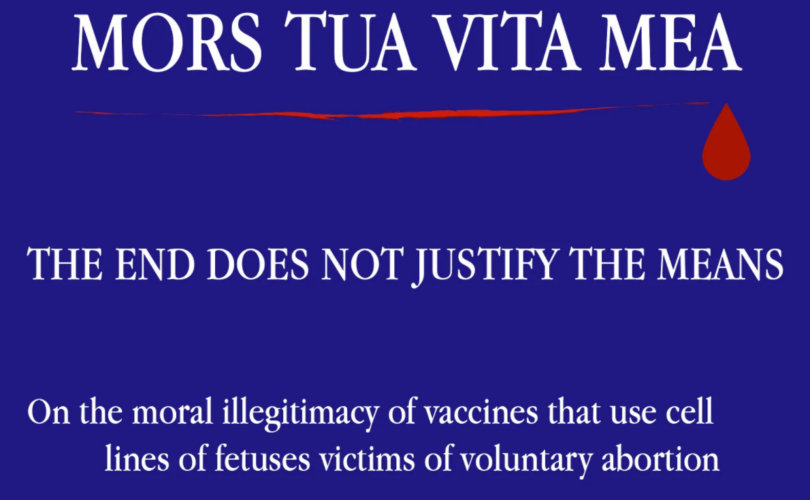 (LifeSiteNews) – A book highlighting the “moral illegitimacy of vaccines that use cell lines from fetuses that are victims of voluntary abortion,” with a preface by Archbishop Carlo Maria Viganò, is now available in English, after its initial publication in Italian.

The 167-page book, available now in English as an e-book, is titled “Mors tua vita mea: The end does not justify the means,” and subtitled “On the moral unacceptability of vaccines that use cell lines of fetus victims of voluntary abortion.”

The work will shortly also be available on the Edizioni del Maniero del Mirto website.

Edited by Massimo Viglione, and with a preface by Viganò, the e-book is dedicated to the problem of the moral illegitimacy of vaccines that use cell lines from fetuses that are victims of voluntary abortion.

The work presents a collection of 20 essays by high-ranking clergy, prelates, university professors, philosophers, doctors, jurists, historians, experts in the field and activists, who advocate for the protection of human life from conception to natural death, without ideological or practical compromise.

Among the contributors to the work are Bishop Athanasius Schneider and LifeSite’s editor-in-chief John-Henry Westen.

The e-book’s subject is very specific, but of great timeliness and crucial moral importance. The topic of the morality of abortion-tainted injections has deeply divided the Catholic world, even in its most conservative and traditional factions.

Therefore, the aim of this book is to provide a clear, unambiguous, reasoned, and documented response to the moral problem posed, which is framed within the specific context of remote cooperation with evil.

While each author has addressed the main themes of his field, the work as a whole remains connected to the reality of the political and socio-economic situation which has governed the world since February 2020, and to which some authors have devoted special attention.

The result is an in-depth picture, including useful clarifications for understanding both the moral problem and the current dramatic situation.

The book was published first in Italian during the summer, and, as Maike Hickson noted, contains strong arguments against the use of abortion-tainted injections, and objecting to any justification of the end products of abortion in the COVID injections.

In his preface, Archbishop Viganò notes that “abortion is proposed by the Satanists as a true and proper religious rite,” arguing that in this Satanic world view, through an abortion-tainted vaccine, one becomes a member of the Satanic anti-church.

The former Papal Nuncio to the U.S. writes that Satan claims “through the pharmaceutical companies that use fetal tissue from abortions to manufacture a so-called vaccine that is presented in the delirium of Covid-19 as a sacrament of salvation by which one is incorporated into the ‘mystical body’ of Satan, the globalist anti-church.”

… we cannot fail to see how instrumental it [the vaccine] is, precisely in its “mystical” value, to the collective acceptance of human sacrifice as normal and indeed necessary: the most innocent and defenseless creature, the baby in the womb in the third month of gestation, is sacrificed and dismembered in order to extract tissue from his still palpitating body with which to produce a non-cure, a non-vaccine, which not only does not heal from the virus, but in all likelihood causes a greater percentage of death than Covid itself, especially in the elderly or those who are sick.