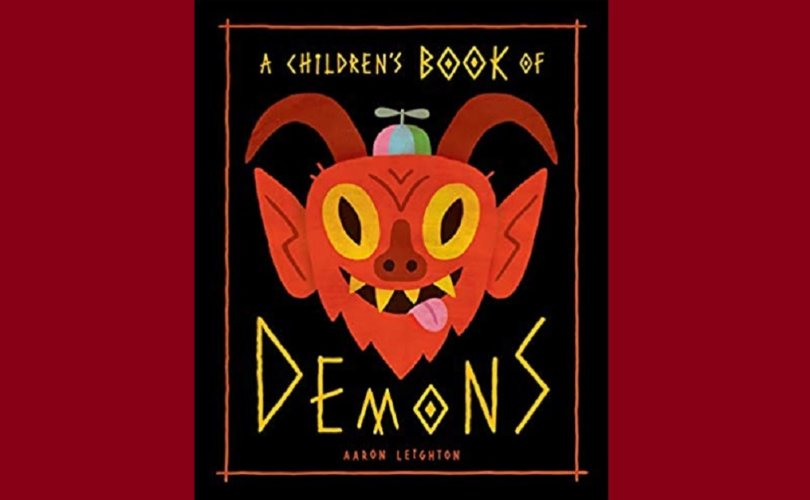 December 2, 2019 (LifeSiteNews) — A new book inviting young children to learn how to summon demons is now available at major retailers such as Walmart, Amazon, and Barnes & Noble.

Written for 5- to 10-year-olds, A Children’s Book of Demons by Aaron Leighton directs kids to “conjure gentle demons by writing their sigils, which serve as ‘a phone number’ straight to the spirit.”

“As ridiculous as the ‘demons’ contained in the book may be, there is nothing innocent or fun about even pretending to summon evil spirits,” noted Elizabeth Johnston, AKA  Activist Mommy, on her blog. “But who is to say it is pretend? The spirit world is real and is no laughing matter.”

“Leighton, an occultist himself, is clearly looking to proselytize our children,” asserted Johnston.

Despite being advertised by Publishers Weekly as being “playful,” and by Barnes & Noble as “more silly than scary,” the book is dangerous, according to renowned exorcist  Fr. Chad Ripperger.

“The recent publication of the book ‘A Children’s Book of Demons’ should be concerning for parents,” Ripperger told LifeSiteNews, because it opens the door to demonic influence in the lives of children.

“In the past, those in charge of the formation of the minds of children noted that the first years of a child’s life, especially until the age of 12, were very important regarding the moral formation of the child since it is during this time that the basics of right and wrong are instilled in the mind of the child,” said Fr. Ripperger.

Ripperger said parents’ primary obligation before God is “to train their children in the virtues as taught by the tradition of the Church so that when they reach the age of majority, they have sufficient virtue to lead a life pleasing to God.”

From the Amazon website, we read, “Don’t want to take out the trash tonight? Maybe you’re swimming in homework? Perhaps that big bully is being a real drag? Well grab your coloured pencils and sigil drawing skills and dial up some demons! This paranormal parody is filled to the brim with funny spirits more silly than scary!” The proposing of a coloring book in order to “dial up some demons” is a form of conjuring which opens the door to demonic influence in the life of the child.

Ripperger notes that St. Thomas goes on to say we may only abjure demons in order to compel them so they do not harm our bodies or souls.

“Since social interaction with demons is forbidden except to compel them to do no harm, the ‘dialing up of some demons’ is forbidden according to the First Commandment,” warned Fr. Ripperger.

“It is a sign of the degeneration of our society that making use of demons is considered acceptable, and it manifests ignorance of their malice and desire to do us harm,” said Fr. Ripperger. “Books such as these ought to be avoided by parents and children, as they pose a possible opening to demons’ influence in their lives, which will only end in affliction and suffering.”