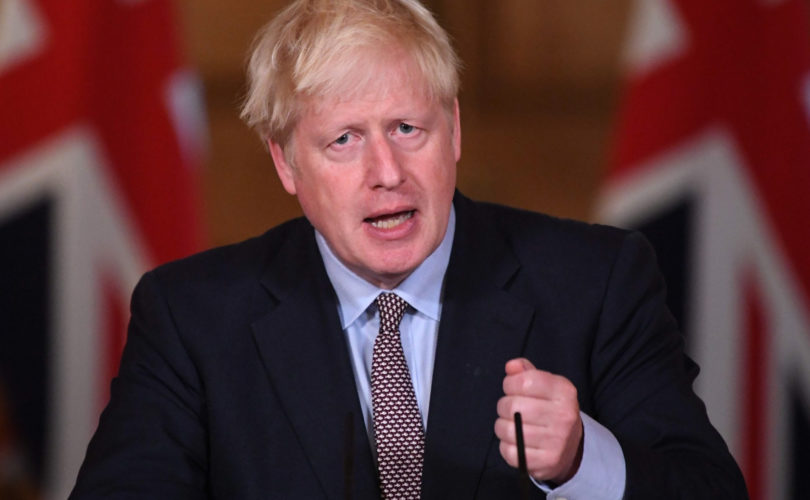 LONDON, July 20, 2021 (LifeSiteNews) – On the much anticipated “freedom day” when the majority of COVID-19 restrictions expired, U.K. Prime Minister Boris Johnson announced that vaccine passports would be required from the end of September in order to gain access to nightclubs and “other venues” where “large crowds gather.”

At a press conference on Monday, July 19, Johnson addressed the subject of the COVID-19 experimental injections in the younger age groups. He stated that 35 percent of those ages 18 through 30, which includes approximately 3 million people, were as yet unvaccinated.

“We need even more young adults to receive a protection that is of immense benefit to your family and friends – and to yourselves,” Johnson declared before issuing a veiled threat against the unvaccinated’s future in society.

“I would remind everybody that some of life’s most important pleasures and opportunities are likely to be increasingly dependent on vaccination.”

The 57-year-old Prime Minister next addressed what he saw as a potential “risk” of infections, namely nightclubs, which reopened their doors for the first time since the first national COVID-19 lockdown began March 23, 2020.

Among the other changes on the already delayed “freedom day” was the removal of the legal requirement to wear face masks indoors, and social distancing rules also being removed. In the place of rules, people will be strongly encouraged to continue with the COVID-19 preventive measures, but not legally obliged to do so.

However, Johnson declared that in order for him to rule out closing nightclubs in the future, such venues should “do the socially responsible thing and make use of the NHS Covid Pass which shows proof of vaccination, a recent negative test or natural immunity – as a means of entry.”

Moments later, he stipulated that a negative COVID-19 test would not suffice for entrance to such a venue: “Proof of a negative test will no longer be sufficient.”

He defended the move by stating that at that time all people over age 18 would have been offered the chance to be “double-jabbed,” and hence the U.K. government is “planning to make full vaccination the condition of entry to nightclubs and other venues where large crowds gather.”

Johnson reiterated how the government reserves “the right to mandate certification at any point, if it is necessary to reduce transmission,” before couching his threat in the form of a desire to return to pre-COVID normality. “Let me stress – we want people to be able to take back their freedoms as they can today,” he said.

“We want this country to be able to enjoy the fruits of our massive vaccination campaign. But to do that we must remain cautious and we must continue to get vaccinated.”

The announcement, made on the day that large swaths of the country had anticipated as the most significant move toward a return to normality since the start of restrictions in March 2020 and on the day that venues such as nightclubs opened, has unsurprisingly sparked outrage.

One former barrister commented on Twitter that vaccine passports “are an attack on us all.”

“They are digital IDs for the vaccinated,” wrote Laura Perrins. “They are a system of discrimination and vaccine coercion for the unvaccinated. They must be opposed.”

Ollie Harfield, a professional footballer (soccer player) in southwest England, described the move as having “NOTHING to do with health. All about CONTROL!!!!”

Meanwhile, Silkie Carlo, director of Big Brother Watch that has opposed the introduction of vaccine certification, spoke to the BBC, calling it “counterproductive.”

“This is discriminatory and it’s deeply illiberal,” she added. Carlo’s organization is currently crowd-funding to raise funds for the legal battle against vaccine passports, which she described as the “road to a two-tier, checkpoint society driven by discrimination.”

She was echoed by Sacha Lord, a prominent anti-lockdown commentator online and the night-time economy adviser for Greater Manchester. Declaring he was “deeply concerned by the discriminatory nature for those who either can’t have the vaccine for medical reasons or age, or who don’t want to,” Lord noted how the list of places where vaccine passports could be forced by the government was “endless.”

Gareth Icke, the son of veteran journalist David Icke, who was banned by Twitter for his vocal opposition to lockdowns, pointed to the element of coercion in the announcement: “Notice you won’t need a stab ID to go to a bingo hall. Nothing to do with protecting the elderly and vulnerable. This Gov has spent 18 months culling them. It’s about coercing the young. Nothing more. Time to be brave.”

Meanwhile, MP Mark Harper, the chair of the Covid Recovery Group of Conservative backbenchers, attacked the government for “effectively moving to compulsory vaccination.”

Their concerns have been previously bolstered by a dire warning from Dr. Michael Yeadon, the former VP of vaccine maker Pfizer. Yeadon wrote that “you MUST object and find ways to prevent a vaccine passport system from coming into being. By any and all means necessary.”

Yeadon stated that the “potential for utterly totalitarian control of the entire population forever lies like a worm at the center of this beyond-Orwellian future.”

The U.K. Conservative government, led by Johnson, has spent the last eight months giving mixed and often contradictory signals over the introduction of vaccine passports. In December 2020, vaccine minister Nadhim Zahawi said twice that “we have no plans to introduce so-called vaccine passporting,” adding that he urged businesses “not to even think about that.” However, in January the government finally admitted that it was funding a trial of COVID vaccination passports, with £450,000 awarded to eight companies.

The Ada Lovelace Institute has compiled extensive research to show that the U.K. had been in the process of implementing such passports since the spring of 2020, shortly after the onset of COVID restrictions. The institute noted that “Public Health England’s draft contact tracing operating model, as of 23 April 2020, explicitly identified immunity risk certification as the sixth pillar of the U.K. Government’s contact tracing plan.”

In May, the U.K. government subsequently introduced a way to demonstrate one’s vaccination status when traveling despite the warnings of human rights campaigners.

Indeed, all such vaccine passports schemes are in direct opposition to Zahawi’s December 2020 statements, as well as a “damning” report by the influential Parliamentary Public Administration and Constitutional Affairs Committee, after a public consultation over vaccine passports. The Committee decided that such a scheme would “by its very nature be discriminatory.”

“The Committee finds that there is no justification for engaging in what is likely to be a significant infringement of individual rights by introducing a Covid-status certification system, and given the absence of convincing scientific case and the large number of uncertainties that remain, we recommend that the Government abandon the idea of using a Covidstatus [sic] certification system domestically,” he said.

Aside from any ethical issues, the Committee warned of the “data protection and security risks” of such a plan and described the Government’s implementation of vaccine passport for international travel, as “contempt” of Parliament and the Committee.

The report and recommendations of the Committee would appear to have been completely ignored by Johnson, who appears determined to make good on his commitment to the G7 Summit to “lead the way” in a worldwide effort to implement an internationally recognized COVID vaccine passport scheme.

Greece just announced that people who haven’t received an experimental, abortion-tainted coronavirus vaccine are now barred from indoor restaurants, bars, cafes, and movie theaters. France has unveiled a “sanitary pass” that means unvaccinated people, in order to participate in regular life, will have to be tested for the coronavirus every two days.