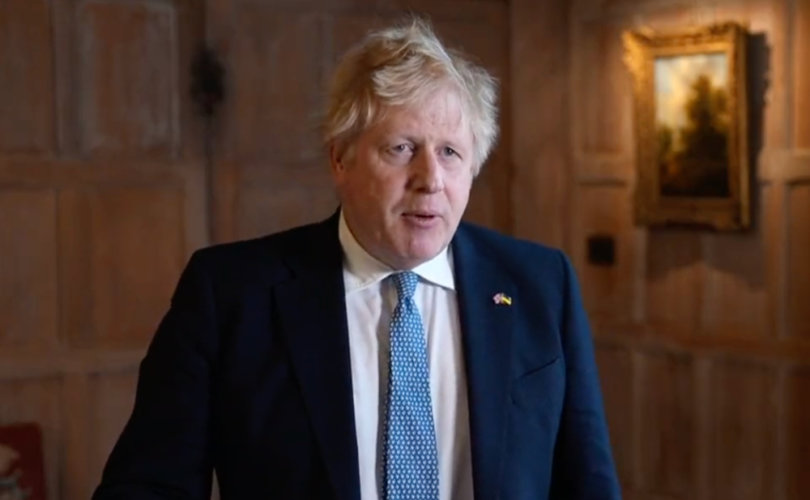 WESTMINSTER, United Kingdom (LifeSiteNews) – Days after U.K Prime Minister Boris Johnson refused to rule out future “pandemic” lockdowns, the Metropolitan Police have served Johnson, his wife, and Chancellor of the Exchequer Rishi Sunak with fines for having attended illegal parties during a 2020 lockdown.

In an interview with recently formed news outlet GB News on April 8, Johnson refused to rule out enacting another lockdown should the country be hit by a “pandemic.”

“I can’t rule out, I can’t say we wouldn’t be forced to do non-pharmaceutical interventions again of the kind we did,” said Johnson.

Defending the previous lockdowns as having “saved lives,” Johnson called it “irresponsible of any leader in any democracy to say that they are going to rule out something that can save lives.”

Suggesting that “there could be a new variant more deadly, there could be a variant that affects children, that we really need to contain,” Johnson said he was “not going to take any options off the table.”

“I don’t think it will happen,” he added, although in summer 2020 Johnson had likened another lockdown to using a “nuclear deterrent,” shortly before enacting two further national lockdowns.

Days after Johnson’s interview, London’s Metropolitan Police announced that they had issued fines to the Prime Minister for attending a birthday party during a 2020 lockdown, which contravened Johnson’s own law at the time.

Johnson had attended a party held for him in the Cabinet Office in Number 10 Downing Street, along with Chancellor Sunak and Johnson’s wife Carrie Johnson on June 19, 2020.

It is not known how much Johnson was asked to pay. Both Chancellor Sunak and Carrie Johnson were issued with £100 fines, which was halved if paid within 14 days. Sunak had denied attending the parties when asked about them in 2021.

In his classic phraseology, Johnson issued a statement April 12 following news of his fine, excusing his actions and rejecting calls to resign. “I didn’t occur to me that I was in breach of the rules,” he said. “I now humbly accept that I was. But I think the best thing I can do now, having settled the fine, is focus on the job in hand, that’s what I’m going to do.”

“I accept in all sincerity that people had the right to expect better,” said Johnson.

“In all frankness, at that time, it did not occur to me that this might have been a breach of the rules”

PM Boris Johnson says he has paid his fine and apologises, adding that he accepts “people had the right to expect better”https://t.co/IbfOhMiPYk pic.twitter.com/s3xNlnDw1x

Over 50 fines have now been issued by Scotland Yard to staff and politicians at Number 10, in relation to twelve parties and gatherings held while the country was either in full lockdown, or when such gatherings were banned. The parties ranged from May 2020 (when people in England were forbidden from meeting more than one person outside) to April 2021, when indoor socialising was prohibited.

“Partygate,” as the collective number of parties has come to be known, has been the subject of much media outrage as for a long time, Johnson repeatedly rejected any claims that he had broken any laws relating to the gatherings.

A civil servant, Sue Gray, issued a report on the 12 events, saying there had been a “failure of leadership.” The full report will not be released until police investigations are complete, an issue which has also caused outrage among MP’s and members of the public.

Slating Johnson’s hinting at a future lockdown, GB News presenter Mark Dolan wrote: “Previous experience would tell us, we are being softened up, for more of these measures in the future. I want to give this guy a chance, and I want him to prove me wrong. But if Boris Johnson, wants to lock us down this winter, add another trillion quid to the national debt, and mask us up with those worthless face nappies all over again, then I want him OUT.”

Meanwhile, veteran journalist and outspoken critic of Johnson’s COVID policies, Neil Clark, noted that the government’s lockdown parties demonstrated their true concern for COVID-19, despite the fear and lockdowns which they were promoting as a way to “stay safe.”