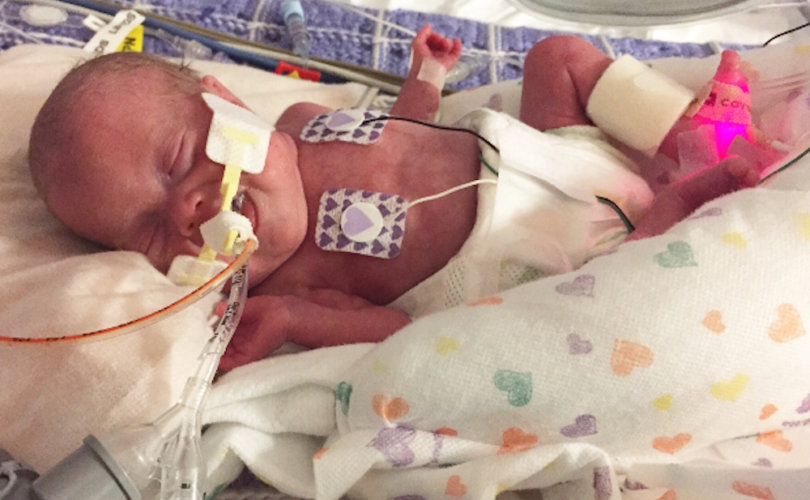 COLUMBUS, Ohio, November 23, 2016 (LifeSiteNews) – An Ohio toddler born prematurely has beaten the odds and gone on to be healthy and a joy to her parents while defying the viability benchmark that has often determined life or death for the unborn since Roe v. Wade.

Cortney Noland and husband Peyton’s story with daughter Willow, who was born at 22 weeks’ gestation, and her fight for life was featured in an article published from The Columbus Dispatch this past weekend, shining a light on the disputed question of when human rights for the unborn should begin.

“She really is a miracle,” Cortney Noland said of Willow, now 20 months old.

As the age of viability continues its downward creep, the ability for states to enact greater pro-life protections for the unborn is increasing. While statistics show an overwhelming majority of Americans, including two-thirds of those describing themselves as “pro-choice,” favor strengthening of laws that protect unborn children, pain-capable legislation remains controversial. Abortion advocates worry that it will chip away at so-called abortion “rights” and pro-lifers are opposed to incremental legislation.

Ohio Right to Life said in a statement that the couple's story could have broader political implications for the right to life in Ohio. But with fetal pain legislation proposed and/or passed in numerous states and nationally, and advanced medical technology and improved standards of care meaning premature babies are defying the rules of “viability,” the ramifications extend beyond Ohio.

“The political significance of this story is in how it undermines an important standard that has determined the rights of pre-born children for the last 44 years,” Ohio Right to Life said.

In Ohio, legislation was passed by the state Senate in June 2015 banning abortion past 20 weeks based upon the fact the unborn child could feel pain. But the bill then stalled in the House later that year, prompting Ohio Right to Life to point out that babies just like Willow are still unprotected by Ohio law. Last year alone, 478 pre-born babies were aborted after 19 weeks’ gestation in the state.

Where the standard came from

In Roe v. Wade, the Supreme Court ruled that the Constitution contained an implicit right to privacy that extended to the right for women to obtain an abortion. However, after the unborn baby is viable on his or her own, states could put greater restrictions on abortion.

The 1973 ruling defined viability at 28 weeks, which was revised to 24 weeks in 1992 in Planned Parenthood v. Casey, in observance of scientific trends that had occurred since Roe.

The age of viability has continued to drop. Doctors are able to preserve life at an earlier and earlier stage, a trend confirmed by a study released earlier this year finding that more than two-thirds of babies born at 22 or 23 weeks could survive if they receive medical treatment.

That study built upon a study published last year by The New England Journal of Medicine said that a significant number of babies born at 22 weeks will survive if they receive life-saving care.

University of Iowa pediatrics professor Dr. Edward Bell told the New York Times in May 2015 that from his perspective, 22 weeks, the age Willow Noland was born, was the new marker of viability.

Her parents didn’t give up on her

The Nolands are thankful they never gave up on their daughter, despite being told before and after her birth by some medical professionals that efforts to save Willow would be futile.

They paused this past summer in realization they’d done the right thing in choosing life. “That was kind of that moment when I was like, 'We did good. We chose right,'” Cortney Noland said.

“She was supposed to be our Fourth of July baby,” she continued.

Instead, Noland went into labor during a March 4 snowstorm last year, contracting sepsis, and Willow was born 18 weeks early, weighing 1 pound, 5 ounces, and not expected to live.

An on-call doctor told Noland while she was in labor that her daughter would not survive birth and therefore there was “no point” in performing a C-section.

Thankfully, Noland said, her doctor was on the way and was prepared to resuscitate “no matter what.”

Willow dropped to one pound the day after she was born, her skin was red, her skull dark from bruising and her eyes fused shut, but she shocked doctors with her survival. And even though her condition was fragile, her parents recognized the family resemblance in her.

“You couldn’t even see what her eyes looked like, or anything like that,” Cortney Noland said. “But what was cute when she was born, though, we could tell that she had Dad’s nose. Even at one pound, I was like, she has your nose.”

A long road ahead

Despite all odds, Willow made it through birth and her first day. Then the next phase of her fight began, with surgery for a perforated bowel at one week old, which she also wasn’t expected to survive.

Willow would undergo a total of four operations during her 236 days in neonatal intensive care.

During that time, doctors continually asked her parents if they wanted to withdraw care, to let Willow die.

The Nolands would often take part in what’s called “kangaroo care,” where they held Willow skin to skin, with the couple lying in bed with her in 12-hour shifts.

The rule has been that physicians don't try to save children born as early as Willow, as they rarely survive for long and have significant problems when they do.

This often means that parents will have to fight with doctors to resuscitate their children.

“When I was a resident back in 1999, people said nobody under 24 weeks can ever survive, and now 23-weekers are surviving routinely,” Shepherd said. “Now, people are saying under 23 weeks really can't survive, and there’s Willow, who was 22 weeks.”

Headed for a normal childhood

At 20 months, Willow had progressed from physical therapy, her gastrointestinal tube was used only rarely, and she was only using oxygen at night as her lungs continue to grow and develop. Her pediatrician does not have concerns over developmental delays or disabilities.

“It took her a few months of catching up, and then spring hit and she just started crawling and walking, and she took off,” Cortney Noland said. “She's pretty crazy now. She is nonstop on the go.”

Cortney Noland said she used to hate Willow’s surgery scars “because they just reminded me of all the sad nights and the hard nights of waiting in the OR room and waiting outside her room to see if she's going to survive.”

“But now,” she continued, “I look at them and I'm like, 'This is just proof of what you can overcome, what you can take.'”

Willow is feisty, strong-willed and stubborn, she said, and the toddler’s favorite food is Cheetos.

The Nolands are certain that Willow was given to them so they could help further research with preemies Willow’s age and to help other premature children have a shot at survival.

“I know she really is a miracle,” Cortney Noland said, “when the doctors would even say to us, “Your baby truly is a miracle, and we don’t know how she is alive.”