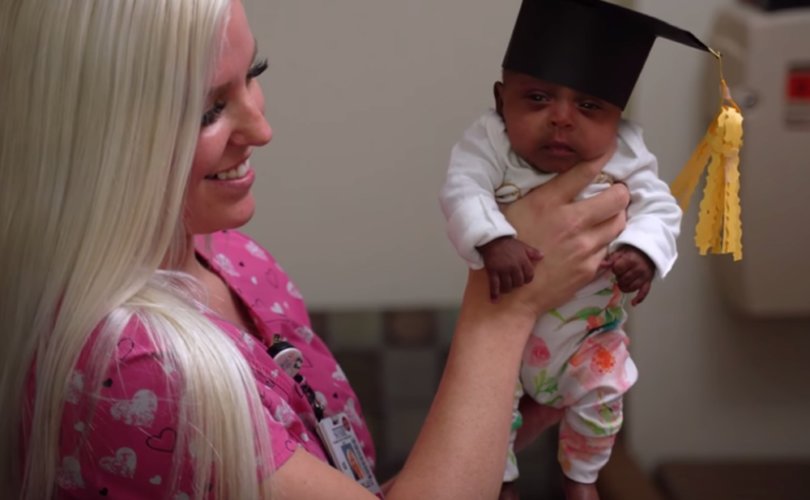 SAN DIEGO, California, May 30, 2019 (LifeSiteNews) — The world’s smallest surviving micro-preemie, born at 23 weeks and three days and weighing “as much as a large apple,” has been discharged from Sharp Mary Birch Hospital after nearly five months in the Neonatal Intensive Care Unit (NICU).

The baby, nicknamed “Saybie,” is “the world’s smallest baby ever to survive,” according to the hospital. She’s now over five pounds. She was 245 grams (8.6 ounces, or just over half a pound) at birth.

The day Saybie was born “was the scariest day of my life,” her mother said in a video the hospital released. “I just felt very uncomfortable and I thought, ‘Maybe this is part of the pregnancy.’ They told me that I had pre-eclampsia. My blood pressure was very, very high — over 200.”

“Doctors said the preterm birth was necessary after they found that the baby was not gaining weight and her mother's life was at immediate risk,” the hospital said in a press release.

“We do everything we know how to do as well as we can, and after that, it’s really up to our babies,” NICU nurse Spring Bridges said in the video. “Some really have the strength to go through what they have to go through and grow outside the womb.”

Any baby born before 28 weeks is considered a micro-preemie. These babies often have major medical challenges like brain bleeds and lung and heart issues. Saybie “experienced virtually none” of those problems, the hospital said. A neonatologist told the Washington Post Saybie had a 20-percent chance of survival.

Saybie was also “about half of the weight [of a] normal 23-weeker,” another nurse said in the video. “You could barely see her on the bed, she was so tiny.”

In the U.S., healthy babies are regularly aborted well after 23 weeks of age and throughout the third trimester of pregnancy. There is no federal law restricting late-term abortion, even though some states limit it. (The federal partial-birth abortion ban merely addresses one method of late-term abortion.)