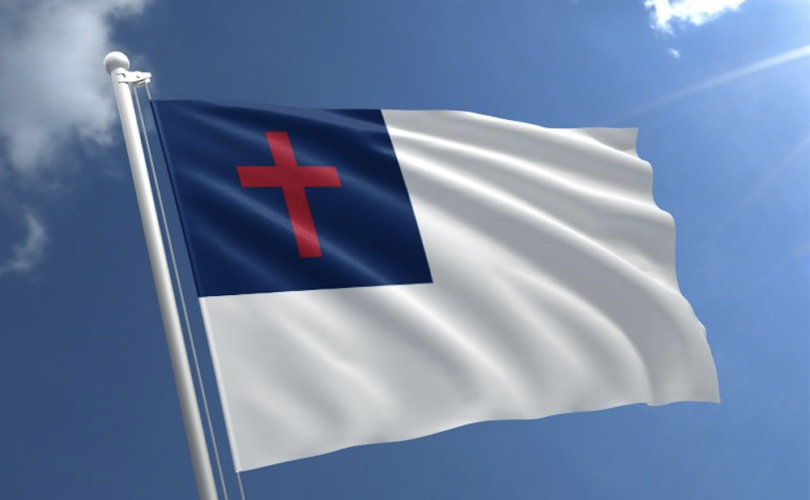 BOSTON, Massachusetts, September 21, 2017 (LifeSiteNews) — The city of Boston allows any group to schedule an event at the city council plaza and fly their flag next to the American flag. Any kind of group, that is, unless the group or flag is Christian.

Gay “pride” flags, transgender flags, Chinese Progressive Association flags, National Juneteenth Observance Foundation flags, and the national flags of any country, including communist countries, have flown over City Hall. But when Camp Constitution applied to have their day at the flagpole and speak on Christianity’s contribution to U.S. history, flying the Christian flag was specifically denied.

In September, Camp Constitution planned to bring speakers to highlight the influence of Christianity on American freedom and rule of law. The camp’s leaders wanted to offer faith-based ideas for racial reconciliation.

Camp Constitution applied to the city in July and gave several possible dates, including September 7, 14, or 25. The city responded September 8 with a rejection letter.

Property Management Commissioner Gregory Rooney sent an email to Camp Constitution stating that the city “refrain(s) from flying non-secular flags.” Rooney claimed the basis of this denial is the First Amendment prohibition of the establishment of religion.

“The City would be willing to consider a request to fly a non-religious flag, should your organization elect to offer one,” Rooney concluded.

Liberty Counsel (LC) stepped in to defend Camp Constitution. “This denial is unconstitutional,” Liberty Counsel chairman Mat Staver said. “They only exclude religious flags while allowing other flags, meaning that they are discriminating against the Christian religious viewpoint.”

Staver wrote a demand letter to Boston Mayor Martin Walsh asking the city to stop discriminating against people of faith. “The City’s past and current practice (and permit application) provides that City Hall Plaza flagpoles are available for privately-selected flags to be flown upon request of virtually any private association or activity,” Staver wrote. “The City has never denied a request based upon the viewpoint expressed by the selected flag, until now.”

The city’s position reflects viewpoint discrimination, according to Staver.

Allowing equal access to the flagpole does not constitute the establishment of religion, Staver said.

“There is a crucial difference between government endorsement of religion and private speech, which government is bound to respect,” Staver later explained. “Private religious speech in a public forum where secular viewpoints are permitted does not violate the Constitution. Censoring religious viewpoints does violate the First Amendment.”

“Where the city of Boston allows any other flag by numerous other private organizations, it may not ban the Christian flag as part of a privately-sponsored event,” Staver concluded.

“Religious expression cannot violate the Establishment Clause where it (1) is purely private and (2) occurs in a traditional or designated public forum, publicly announced and open to all on equal terms.”

The letter quoted a 1995 Supreme Court ruling that concluded, “Those conditions are satisfied here, and therefore the State may not bar” the Christian flag.

“The city has opened a ‘forum’ – flagpoles in front of City Hall Plaza – and the opportunity to fly privately selected flags on them pursuant to a permit scheme,” the demand letter concluded. “Where this is true, the government cannot then prohibit flags it deems ‘religious’ in nature.”

Liberty Counsel respectfully demanded that the city of Boston confirm in writing that they will allow Camp Constitution to have its event, including raising the Christian flag, “as a cultural celebration of the contributions of Christians to the City’s diversity, religious tolerance, and the American rule of law.”

The legal organization also demanded that the city announce the event online, as per usual city practice, including a picture of the Christian flag.

Liberty Counsel gave the city until September 27 to do so or else its lawyers “will take additional actions to prevent irreparable harm to the rights of our clients.”