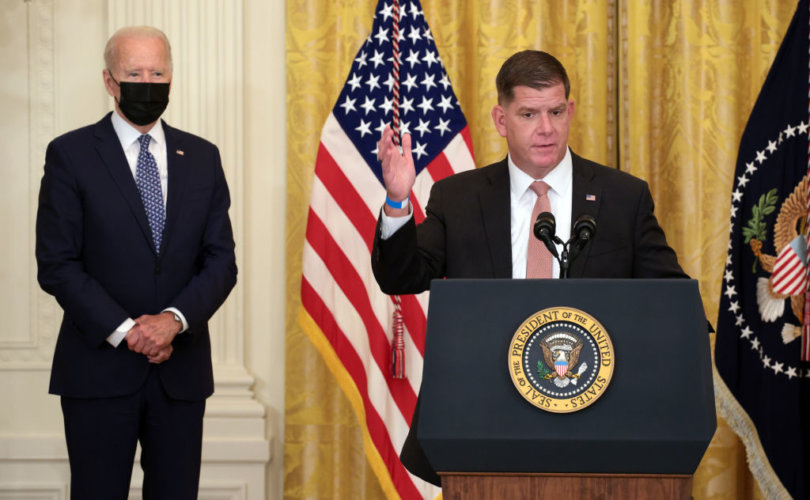 Martin J. Walsh now serves in the Biden administration as Secretary of Labor and has a record for pushing pro-abortion policies, despite being a baptized Catholic.

Although describing himself as “personally pro-life” early in his career, the politician soon showed himself to be a vehement proponent of abortion, removing restrictions to abortion while mayor of Boston.

After former President Donald Trump’s election in 2016, Walsh defended the “importance of having access to abortion” and promoted Boston as a place where abortion clinics would prosper, ironically naming Boston a “safe city” on that account.

Later, upon his nomination as Secretary of Labor, NARAL congratulated Walsh and said that it was looking forward to working with him “to ensure that reproductive freedom is a reality for workers in America.”

Walsh has also praised the life of notorious abortionist Kenneth Edelin, who was convicted of manslaughter in the 1970s after suffocating a male unborn baby by compressing the umbilical cord while still in the womb. The conviction was later overturned owing to an apparent lack of evidence that the killing was a live-birth abortion, the National Catholic Register reported.

“It would be hard to overstate his [Edelin’s] mark he made on the city of Boston. He possessed a rare combination of a remarkable talent and a devotion to doing the right thing,” Walsh said.

Given Walsh’s record, C.J. Doyle, executive director of the Massachusetts Catholic Action League, described Walsh as the “most militantly pro-abortion mayor in the history of the City of Boston.”

“Walsh embodies Biden’s idea of what an American Catholic government official ought to be: an assimilated conformist to elite secular culture who rejects, as extraneous to public discourse and alien to democratic governance, the Scriptural precepts, and natural law traditions, of Christian morality,” Doyle said.

Defending the decision, a Catholic Memorial spokesman said “[a] few hundred alumni, school families and generous supporters are helping us raise much needed scholarship funds, which are given to more than 60% of our students, many of whom would not be able to attend our school without the aid.”

The award is usually intended to recognize the work an exceptional individual has done to improve the lives of others, prompting William Cotter of the Massachusetts Pro-Life Coalition to condemn the school’s choice of recipient as “a shameful betrayal of core Catholic moral beliefs and an overt violation of the prohibitions contained in Catholics in Political Life,”

“It demonstrates a depraved indifference to the slaughter of 63 million unborn children since Roe v. Wade,” he said ahead of the ceremony.

“Catholic Memorial was founded to educate and foster good Catholic youth to grow up and assume positions of leadership and responsibility both within the secular realm and within the Church,” Cotter explained.

“So what kind of example are they setting by saying that this guy gets the honor because he donated money or he helped bring the unions in or donated resources to the school?”

“Once again, it’s like saying that mammon takes precedence over truth,” he lamented.

“It kind of sent a message that abortion might not be that bad to support or maybe even participate in, because after all, Martin Walsh is a zealous proponent of abortion and he’s receiving the Blessed Edmund Ignatius Rice Award,” Joyce said.

“The message to the students is contrary to the message that you want Catholic young men to receive,” Joyce criticized.

Boston Cardinal Sean O’Malley’s office distanced itself from the school, with an archdiocesan assistant stating that the “Archdiocese was not involved with the planning of the event” and that “Catholic Memorial is a separately incorporated Catholic school with its own Board of Directors entrusted with oversight of the institution.”