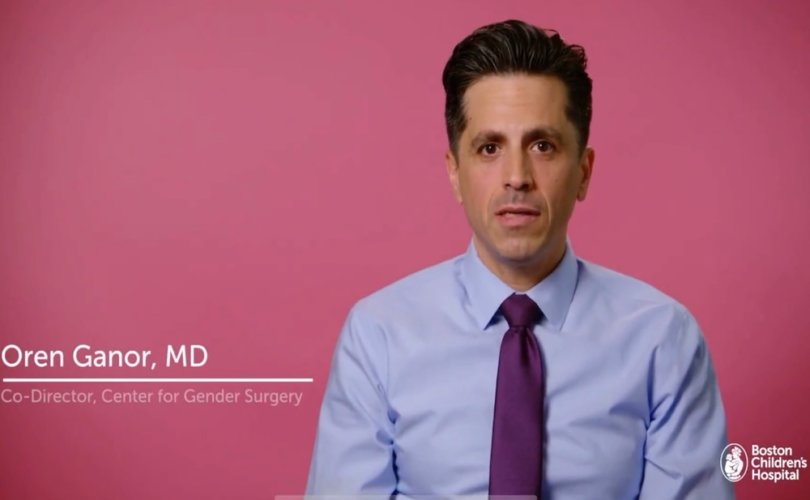 BOSTON (LifeSiteNews) — The CEO of Boston Children’s Hospital reportedly assured employees the hospital “won’t back down” after receiving backlash for performing mutilating transgender surgeries on minors, according to a statement obtained by independent journalist Chris Elston.

In an update reportedly sent to employees, BCH President and CEO Kevin B. Churchwell, M.D., said the hospital reaffirms its “long-standing commitment to the LGBTQ+ community and to health equity and inclusion.”

“Today, we are living in a highly polarized environment that creates unique challenges,” Churchwell reportedly said, highlighting the work undertaken by the hospital’s Gender Multispecialty Service (GeMS) which works with patients from ages 3 to 25.

“Time and time again, we’ve seen those with a specific agenda seek to discredit those they disagree with by spreading false information with the intent to mislead,” he said, according to the screenshot.

“We won’t back down in the face of lies, threats, and other forms of intimidation,” the memo reads. Churchwell did not immediately respond to LifeSite’s request for confirmation and clarification.

The CEO of Boston Children’s Hospital has just issued this update to all staff.

He says “those with a specific agenda” are “spreading false information intended to mislead.”

In this thread you will find @BostonChildrens own videos that I recorded, before they deleted them. pic.twitter.com/CGoofbrFNd

The statement comes after independent journalist Chris Elston (also known as Billboard Chris) and conservative commentators like Libs of Tik Tok and the Daily Wire’s Matt Walsh and Michael Knowles, raised the alarm earlier this month about a series of the since-removed videos promoting the destructive surgeries for young people.

In the wake of widespread criticism, BCH updated its website to assert that it does not perform transgender genital surgery on young people under the age of 18. Teens ages 15 and up, however, may have breast removal or augmentation with parental consent.

The hospital’s now-deleted video series depicts many doctors outlining the details of radical transgender surgeries. Elston embedded several of the videos in a Monday Twitter thread.

In one clip, which was also highlighted by LifeSiteNews, an obstetrician cheerfully described the brutal procedure of ripping out the uterus and other female reproductive organs through a so-called “gender-affirming hysterectomy.”

In another video produced by BCH, a doctor describes the procedure for castrating and mutilating males to make them appear more like females.

When it comes to boys, they are castrated and the penis is sliced and inverted to form a neovagina.

Puberty blockers stop penile growth so there is not enough tissue, in which case they cut out a piece of stomach or colon to line the neovagina. pic.twitter.com/sXbSjBcgCh

BCH states it follows guidance from The World Professional Association for Transgender Health (WPATH) “to surgically treat” transgender people. In June, WPATH released its updated guidance lowering the recommended minimum ages for specific transgender surgeries, including suggesting that girls can have their wombs removed at 17 and boys can be castrated and mutilated at 15. It’s unclear whether BCH will adapt its minimum age limit to align with WPATH.

In another BCH video highlighted by Elston, a medical doctor says some children seem to “know” they are in the wrong body “as early as the womb.”

Yet another clip shows a doctor explaining that parents can know their young child is transgender by observing that the little boy or girl is playing with “opposite-gender” toys, attempting to or refusing to urinate standing up, or trying on the clothing of the opposite sex.

Arguments that children must be transgender if they play with or are interested in things corresponding to the opposite sex have been sharply criticized by those outside the radical transgender movement.

Last week, German developmental biologist and Nobel laureate Christiane Nüsslein-Volhard argued that that allowing children to “change their gender” is “madness,” noting that she, like “many girls,” had been ”unhappy in puberty” and briefly wished she was a boy.

“There are people who want to change their gender, but they can’t do it … People retain their gender for life,” she said, calling claims that people can become the opposite sex “nonsense.”

“[I]t’s confusing that the same progressives who claim to be so against stereotypical gender roles, are telling young girls with stereotypically ‘boyish’ interests and style that they might actually be boys,” she remarked.